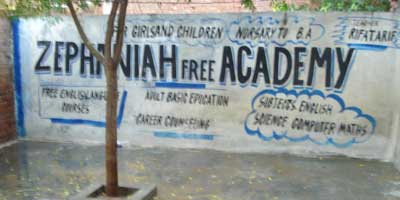 After completing her matriculation at Government Girls' High School, Saima was not allowed by her brothers to go to college, so she had to stop her studies, although she obtained very good marks in her matriculation exams.

She had so many dreams, but she was helpless.

Then one day about five years ago, she came to learn English at my centre; I welcomed her. She was allowed by her family to join my centre because it provides free education to all.

While she was doing her course of English language, I was successful in convincing her family to allow her to continue her studies. I told her mother that I will help Saima by providing books and everything.

Saima did her intermediate studies in 2012 and in 2014, and she sat her exams to study for a bachelor's degree, thanks to my friend Amby Doolan from Australia, who paid her fee to take exams as a private student with the University of Punjab.

Saima was very sure that she would pass her exams with very good marks, so before the result of bachelor's exams, she told me that she wanted to do Master's in English literature; it was a good news for me, so I bought her two books. I could buy only two and through that, when she finished these two, I would buy rest of the syllabus for her.

She was my favorite student: she took responsibility of the centre and I gave her charge, so she was the leader of volunteers at Zephaniah Free Education. Saima was very good in maths, so the children were very happy with her.

I always tried to give her extra time for study, as she was intelligent and more importantly she had so much self-respect: she always wanted to return to me whatever I did for her, so she gave time to our students as a teacher very honestly.

But one day when she went home, once again she was ordered that this much education was enough, and she did not need to study any more because she does not have a job; the girls of good families do not go out - they stay at home and she will have to do the same, she was told.

She sent back both books to me.

It was very sad news for me; I had given her five years of my life and I wanted her to live a successful life, but I could not make it possible for her. I did every possible thing for her no matter whether I was tired or I was sick, or I was hungry, but I never took a break from teaching her.

Then one day I heard horrible news: Saima's elder sister was married just one and a half years ago, and she had a six month-old baby girl and was pregnant again. Her husband died in a road accident and right after his funeral, the wife was asked to leave the house of her in-laws.

Because her husband died, she had nothing to do there now, it was said by her in-laws, so she came back to her mother’s home.

Her brothers kept her at their home and they did not allow her to do any work because it will be against their honour if their sister will do any work among men, but they humiliated her by giving small things.

Work for both sisters

Saima's mother is getting very sick, and her widowed sister is also sick and hopeless for her future; by knowing her condition, I came to know why women feel hopeless and helpless without a man in society because they depend on men for everything, from home to food and clothes and for identity in the society.

But recently, Saima came to my home – she was very weak, but strong in her determination. She told me that she wants to do a job for her sister and for her children.

I asked Saima if her sister knows any skill.

She told me that her sister can do stitching, so I invited her to also bring her sister along, as a stitching centre’s teacher here, and Saima can be a computer teacher. In morning time, Saima can do a job in a private school as a teacher – and in evening she can teach computer at our centre. I will pay her $50 a month and she will get a salary from the school too, and I will ask people in our locality to get their clothes stitched by Saim's widowed sister.

I saw a light in her eyes, she was happy because I gave her a way to keep going and to keep dreaming, although this is not enough; they deserve and need much more.

There was still a problem that their brothers will not allowed them to do a job, but this time Saima says,

“I am educated and I am not going to do anything bad, I am going to do a job for my family and I will do it – I have enough guts to convince my brothers for this; I will tell them that we will not be any more burden on them. I will give them an example of my sister Zeph that a woman can do anything without crossing her limits and boundaries set by the society.”

And I thought I did something good; because of my centre, four lives are going to be safe.