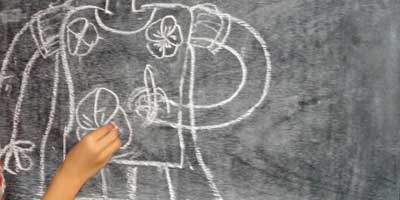 Zarah used to play with dolls when she was 3 years old.

Her aunt, whose son was 9, always said Zarah will be her daughter in-law, arranged a marriage ceremony of Zarah's dolls too many times. Her mom always said, “Learn to cook and to decorate your home so that your husband will love you. Keep your skin clean so he will like it. Learn stitching and embroidery so that he will think you are a good wife.”

Zarah started dreaming of a man who would love her, who would hold her in his arms and will take her faraway, where there will be no misery, hunger, limitations, and no worries.

She started reading love story novels after completing her 7th standard and stopped going to school.

She wanted to have a man just who could love her.

'Your Body is Mine'

So, Zarah started dreaming of her cousin, and one day, they both told each other of their feelings that they had for each other;  they started hiding their love from society and family because it was not allowed to get married with one's own choice.

One night, when her none of family members were at home, the boy came to force her to make love with him; she said, “No, this is wrong”, but he replied, “I will get married with you and you are mine –  your body is mine. Do not think you are mine and I am yours.”

She said yes and he did whatever he wanted to do with her; now it was routine, once or twice a week. After some time when she asked him to get married, he denied her by saying, “If you do not care for your family‘s respect, how would you be faithful to me?”

Zarah reminded him of a lot of things about their love, but he went away by saying, “I will marry to a girl who will be having control over her feelings. Now, you are useless for me; I have taken out of you what I wanted to take.”

Because She is a Girl

She could not tell this to anyone, because it was wrong. Because now, she was not a virgin, so it was impossible for a man to marry her.

And if her parents would come to know –  they would kill her or force her to marry a widowed man, a very aged man, or a disabled man, because now she does not deserve to marry a boy of her age for she has committed a sin that cannot be forgiven by the society.

The reason is because she is a girl.

If she would have named the boy, he would deny what he did.

She asked him, “Ok you go get married, but marry me, too –  I will live as your second wife. I will not ask you for a home, for anything; just accept me as your wife because now I cannot leave you.” (not because she loved him now, but because he had taken her virginity.)

But all was useless; she kept on thinking there was no way [out].

And one night she hanged herself with a fan and passed away....

This is Not Something New

This is not something new that I told you –  it happens here every day.

We condition the girl’s mind to live for a man, and when she thinks to do so, we think she is not allowed to be alive.

Why don't men fall inside these boundaries?

Why is it only women who have to commit suicide –  if it is good for her, then why not for a man? If a man has physical relations with more than one woman he is a man, and if a woman falls in love and wants marry a man of her choice, it is an honour to kill her.

Why are girls being told from birth that they must make a man happy –  a man who will be her so-called husband, and why do we not teach our boys to respect women?

Why do we give training to a girl to be a good wife, but we teach a boy to be a 'good' human being? These are the double standards of our society.

We think that a mother is very respectable, but we do not think that today’s girl will be a tomorrow’s mother.

Our society is sick that thinks it is good to make a girlfriend of any girl, but a wife should be the one who is packed in clothes like we pack fruits in a box to export.

Who does not have her own identity and who does not know for what reason she is here on the earth?

We want girls to be faithful, but we think it is the right of a man to cheat at any time.