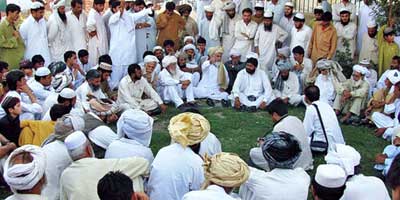 An article on Foreign Policy "Islamic Republic of Talibanistan" argues that since Pashtuns on both sides of the Durand Line have waged jihad for an Islamic system or sharia law, why don't they implement sharia law in this region? The author proposes that the Federally Administered Tribal Areas (FATA), other Pashtun areas in Pakistan, and the Taliban controlled areas in Afghanistan should be carved into a new state or semi-state, letting people be ruled by barbarian laws, codes, and customs.

Proposals and assertions like these are deeply flawed on multiple levels. The first problem is the kind of coverage such problematic assertions, generalizations, and misconceptions get from mainstream media. The distance such proposals have from ground realities often blurs the facts when it is received by foreign audience. Such misconceptions are often formed by a lack of assessment of actual political and social conditions of the areas in question, which are further aggravated by the Establishment's philosophy of "Pushtuns' love for traditions."

The established understanding of Pushtun culture as a harsh way of life and a set of codes that institutionalize and perpetuate barbarity is what informs the nature of such proposals and assertions. Pushtuns' mistreatment of women and their readiness to spill blood over honor issues are presented as natural precursors to barbarity of the Taliban. The ethnic composition of Taliban is another thing that such spin-masters employ to present Taliban as a genuine Pashtun-culture driven force and as true representatives of Pushtuns.

What they forget in this mix is that the Pashtun society used to be one of the most progressive in the region, which had progressive political and social movements at the grassroots level. The Khudai Khidmtagar movement led by Khan Abdul Ghaffar Khan (aka Bacha Khan) and then the subsequent sway of National Awami Party speak volumes about the recent political and social nature of Pashtun society on the Pakistan side. The Saur Revolution and the progressive regime of former Afghan President Daud Khan are events of recent past. This past is not that far away from the present that it should escape the considerations of such spin-masters.

History is replete with movements that betray the popular narrative about Pashtun society being a religious and backward one. The Peer-e-Rokhan movement stands at the pinnacle of a long series of rebellions against the Islamist imperialists. This one movement in particular stands out because the forces of Mughal combined both the well-trained military and well-versed clerical powers to colonize Pashtun lands. The leaders of Sufi-informed Pashtun nationalist movement, Peer-e-Rokhan, and his lieutenants faced the wrath of official clergy, Akhundarweza, and his supporters and were confronted many times with Mughal armies. Yet, they triumphed despite all the odds.

Another such event in history is the debacle of Tehreek-e-Mujahideen, a movement led by Shah Ismaeel, which misled vulnerable Pashtun tribesmen to support his movement in the name of religion. Pashtuns were deceived by the sincere façade and bravado of jihad by the mujahideen, but after the help of Pashtun tribesmen when they defeated Sikh rulers of Punjab, they started to come to their true colors. Their mindless interference with Pashtuns' secular way of life, their grip on power, and their insistence for the jihad council to be the decision-making body rather than the secular jirga awakened Pashtuns; they were driven out of the Pashtun lands and were left in the wild to be hunted down by Sikh armies while their desperate cries in name of Islam fell on deaf ears of Pashtuns whom they had betrayed earlier by using religion as a bait.

Mirwais Khan Hotak (aka Mirwais Neeka) was raised in rebellion against the brutal Iranian regime, which ruled the Pashtun lands in the name of religion. Often fatwas were used against the forces of Mirwais to deter them from fighting for their freedom. The Saffavid dynasty-backed religious clerics used the established edicts in Muslim jurisprudence that declared any uprising against the 'Hamkim-e-Waqt' as 'fitna.' Mirwais Neeka took many pains to travel to Mecca and get a fitwa from religious authorities there to legitimize his uprising. These tales of the past should be reminded to such spin-masters who think the Taliban are the true representatives of Pashtun culture and their way of life.

Pushtuns have fought extremists in the past. They have stood firm against the onslaught of cruelty and brutality. No matter how vocal these self-declared experts on the history and culture of the region try to analyze Pashtuns, the recent sacrifices of Pashtuns against the Taliban demonstrate the true nature of Pashtun society. Pashtuns are the first victims of Talibinisation, and they did not ask for it; Pashtuns have suffered the most at the hands of the Taliban than any other ethnic group in both Afghanistan and Pakistan. Therefore, these so-called experts should stop presenting that Talibanistan is what Pashtuns have been wanting all along.

Hurmat Ali Shah is a freelance writer interested in of politics, culture, and society. He can be reached by email: .