FATA Women and the Question of Taliban Sharia 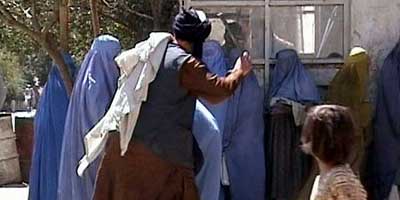 As Pakistan is about to define the parameters of talks with Taliban, certain questions and concerns are missing from our media, particularly analysing the current debates on electronic and print media.  The question of women's plight in federally administered tribal areas (FATA) has so far eluded the discourse on our mainstream media.

During the past decade, FATA was reported only in the context of drone attacks, martyrs vs non-martyrs, US War or our own war, military operations and the subsequent displacement of large number of IDPs. The human side of this war especially its gender aspect remained least discussed in our media.

The miseries of women in FATA due to mass migration, internal displacement, rape abuses, and killings in this war on terror have received little attention or sympathy. No help is available to women who were widowed, sexually abused, and their children orphaned during this war on terror. Women and children in camps and different villages are traumatized, but due to conservative cultural norms and traditions, they can’t seek help or counselling. According to a recent study a great majority (71% of respondents in IDPS camps), believe that they have suffered depression, anxiety and other psychological issues particularly among women and children. Women are less likely to share their burden and have learnt to dull their feelings with silence.

The already existing vacuum created by article 247-b of Pakistan’s constitution, which put FATA outside the jurisdiction of Pakistan’s Supreme Court and parliament, has further isolated the region due to the ongoing militancy.  The vacuum was filled with traditions, local customs, tribal Jirga’s, and FCR ( frontier crimes regulations) further widened when Taliban entered the area, exploiting the situation and have now made this administrative system ineffective.   Their stern dogmatic views have made Women right to education, vote and free movement as the main casualty in the current situation.

An estimated seven million population of FATA women constitute up to 60% of the work force in the agricultural sector, mainly to earn their sustenance and support their families.  With the Taliban take over, many were restricted to stay indoors. The loss of work force pushed some of the families, especially those families who has no male breadwinner into extreme poverty.

Taliban's foremost ideological agenda seemed to be annihilation of educational Institutions across FATA.  Girls were banned to attend schools coupled with bombings of girl’s schools in FATA by Taliban.  There are news reports that the remaining schools were taken by Army as base camps. According to official data of Fata Secretariat, 450 schools in FATA has been bombed in recent years. With less than 3% literacy rate among FATA women, and the destruction of infrastructure, and forcefully stopping girls from going to school has further effected the lives of the women in one of the poorest region in the world.

Along with education sector bombing of schools by Taliban, health sector has had major setback by targeting polio workers in the region.  The already non-existent health infrastructure in FATA further deteriorated due to the ongoing militancy. FATA has 41 hospitals for its estimated seven million populations. There is one bed in hospitals for every 2327 people as compared to 1450 in the rest of Pakistan. For a population of 8189, only one doctor is available and a mere 43% people have access to safe drinking water. Taliban banned women stepping out of the house without a mehram. With restricted mobility, women and children cannot visit health clinics thus affecting their health and wellbeing.

The recent developments of talks offer to Taliban by the state of Pakistan and subsequent demand of Taliban of imposing shariat ignores the women question, in fact altogether the lives of people in FATA. Does this mean that the impending imposition of official shariat will replace the old system operating in FATA? Will imposition of shariat with state blessing acknowledge the basic rights of women? Will women right to education, health, and free movement be ensured?

The implementation of shariat by Taliban even in its very strict sense ideally should not have affected the education, health and work rights of these women.  But unfortunately with their myopic shariat girls were forced to stay indoors, schools were closed and their mobility was restricted in the Taliban controlled areas in FATA.  It is very much clear that Taliban are averse to women role even limited one, like women in FATA has outside their homes. This is their policy agenda of shariat regarding women.

Taliban rule in FATA has created a system that runs parallel to the one already operating (somehow dysfunctional though) making it more oppressive and subjugating for women of the region. During Taliban shariat rule in Afghanistan many women died of minor alignment because of their restricted mobility, only allowed to travel with mehram and restriction that women would be seen only by female doctors.

Pakistani Taliban shariat version is more tribal and customary in nature rather than Islamic. Taliban in Pakistan have given the same edicts which were given by Taliban in Afghanistan regarding women, making it one of the most misogynists’ regimes in the world.  Taliban has achieved its aim of becoming non-state national actor by showing its concern about the constitution and the future political agenda it wants to set, but we know that these concern will only be entertained by Pakistan in areas which doesn’t come under the constitution like FATA. However with state approval this tyranny will become official.

All these basic concerns of women in FATA who are already burqa-clad has restricted mobility, and suppressed in the name of Patriarchy however should be addressed if we want to talk about durable solutions in the region. Women become the Worst victims of war – and the biggest stakeholders of peace. How do our country expect a ‘return’ to peace (and we need to question the composition of such a peace where women who are already a part of marginalised system (FCR, JIRGA, DASTOOR, RIWAJ) will be further persecuted with state blessings and tribal selective shariat. The precedence of Taliban rule and their treatment of women are just next door to us and is not a very healthy one. Ignoring the women question and their stakes in the possible imposition of Taliban version of shariat in FATA, in our dialogue with them is a criminal neglect, and on which our liberals are quiet since achieving peace is somewhat desperate priority by the state of Pakistan. However achieving peace by ignoring half of population will be a farce.

Mona Naseer is from FATA, Pakistan. She has a Masters in International Relations. She has interest in South Asian politics and gender issues, particularly in relation to women in FATA and Khyber Pukhtunkhawa.

Safe World Petition: Calling for the Protection of Children in Pakistan, Especially the Tribal Regions