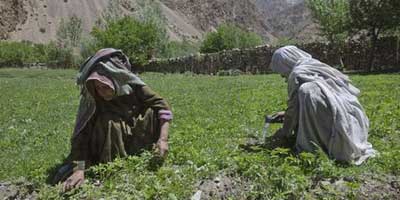 Even though the vast majority of Afghanistan’s population professes to be the followers of Islam, women are not given their rights that Islam guarantees them. Mostly, women are mistreated in Afghanistan due to the traditions that undermine the basic human rights of women. Conservative practices are used in the name of religion and tradition, denying women their formal legal rights. One such example is women’s rights to inheritance and property. In Afghanistan, Islamic law determines inheritance rights. However, when it comes to women, tribal law decides their inheritance rights. Tribal laws ignore the fact that women are entitled to inherit property and land, restricting the role of women and preventing them from having secure rights to inheritance.

Islamic law grants inheritance rights to women which they may not have under tribal law. Since women are less powerful in the society, they are denied their rights due under Islamic law. Islam gives women half the share of inheritance available to men. However, even that share is not given to them under tribal norms.

Generally speaking, women by default are not considered a part of inheritance rights throughout Afghanistan. There are statutory laws on paper that guarantee women their property rights. However, mostly, women living in the cities benefit from them. Majority of Afghans live in rural Afghanistan and women living in rural areas do not benefit from these laws, not because these laws don’t apply to them but because tribal laws are more powerful and dominant in rural Afghanistan. To say that all women living in the cities are guaranteed their inheritance/property rights would be wrong as well because most women who live in the cities do not or are not able to ask for their inheritance rights for the following reasons:

Women who do ask for their property rights whether they live in urban or rural areas are considered “shameless” by their own family members, relatives, and community as a whole. The stigma of being labeled as “shameless”, forces women to remain silent and not ask for their own rights. Women are given this perception that they have to “gift” all their share of the property to their male relatives in order to remain honorable among their family and friends. In other words, the tradition is that it is inappropriate for women to inherit any property even though Islam is clear on this that they can inherit. In a collectivistic Afghan culture, no woman wants to be branded as such because it ruins her reputation, which is very important for her survival in the community.

If a woman asks for her legal property rights from her male relatives, she is not considered a part of the family anymore or is not deemed respectful as before. In some instances, the family disowns her completely. If a woman goes through law enforcement agencies to gain her legal rights to property, it means disgracing her family’s honor, and she will lose the respect she had in the family and in the community.

Women are discriminated against in Jirgas held in rural areas to decide their inheritance rights. So even if they try, they will not be given their due rights. Thus a woman cannot take the risk of being labeled as shameless and at the same time get nothing out of the case. This unfair and discriminatory local tradition has pushed women into bearing all the mishaps and remaining silent.

It is noteworthy that age is a big constraint in getting justice in Afghan society. Only older women are taken seriously. In the present times, if a woman is younger and starts to fight for her rights, she is not seen as a hero as much as an older woman would be. Therefore, younger women don’t even bother to ask for their property rights because they know they will not be able to gain anything out of it.

Most of the time, women refuse to inherit and give their share to their brothers, instead, to show their love and support for them even though they know they have legal rights to inherit. They do so to gain respect in their family and community. This has become the norm to the point that brothers expect their sisters to give them their share of inheritance. Many times a woman is not even asked if she wants to give her property to her male relatives because people know what is expected of her in such situations. Women, who do ask for their formal legal rights, lose their respect in their own family. This makes them give up their legal rights in exchange for “respect” gained in their male relative’s house. Therefore, women have to think twice before claiming their share of family property because of the consequences attached to it, discouraging them to ask for their legal property rights. In most cases, women remain silent.

When Afghans claim to be strict followers of Islamic religion, why don’t they give women their legal rights to inherit according to the orders stated in the Quran? Why does tribal law determine inheritance rights for women in Afghanistan?

While there might be other reasons, poverty has a direct connection to why tribal laws decide property for women in rural areas of the country, where the majority of the population lives. Afghanistan is one of the poorest countries in the world. The past three decades of war has had a devastating impact on the economy of the country. Even though poverty is widespread in both rural and urban areas of Afghanistan, poverty is more severe in rural areas. Therefore, poor people own some land and cattle, which they want to pass on to their sons because the daughters will be married off anyways to live in other peoples’ houses. It makes much more sense for poor people in rural Afghanistan to apply tribal law in this case because it is to their benefit. If they let women inherit, not much would be left to the male relatives because, generally speaking, families in Afghanistan tend to be large.

Another reason that discourages men to give property rights to women in most cases in both rural and urban areas of Afghanistan is losing tribal connection. Afghanistan has a tribal society. If, for instance, a share of land is given to a woman who has been married off to a man in a different tribe, it would mean her husband is directly involved in her father’s land. This could be frustrating especially if the “new man” in the family belongs to a powerful family. The males in a tribe do not want to lose their influence to an outsider. This is one of the reasons why people who own a lot of land prefer their daughters to be married off to their cousins because that way the property stays within the family.

There is also less judicial support for women’s inheritance rights. Afghanistan has a patriarchal and male-dominated society. Those in the position of power in the judicial system do not deem women’s rights important. While there are laws on papers, they are rarely applied and violators are barely punished.

In short, the only solution to this problem is economic development and implementation of law. Women should be guaranteed their rights. Educating girls in a way that they can trust themselves should be one of the priorities of the government so that they will be able to fight for their rights instead of shying away due to the social stigmas attached to speaking up. This may take time but is not impossible. Most women know they have a legal right to inherit property and land but they can’t do anything because they can’t go into war with their own family members and can’t afford to lose their respect in their community.