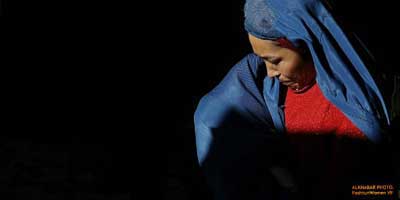 Why are foreigners expected to protect Afghan women when their own men have failed to do so? Are Afghan men not competent enough to do their job or simply not willing to do so? Afghan women need protection, not from foreigners, but from the Afghan authorities and men in their own families and communities.

The condition of Afghan women today cannot be detached from the miseries of the past three decades of war. Throughout the years of the Soviet invasion, the Mujahidin rule, the Taliban reign, the US-led international intervention, and the current Taliban insurgency, women in Afghanistan have suffered the most. They have been denied their basic rights either by official government decrees or by their own husbands, fathers, brothers, and sons.

Many would argue that the political and cultural situation of Afghan women has improved significantly since the Taliban were toppled from power in 2001. The Afghan Constitution—in name only—recognizes the equality of women’s rights to those of men. Additionally, Women have been able to return to education and workforce. However, despite all these changes, many challenges still remain. Women are suffering from oppression all over Afghanistan, especially in rural areas where the majority of Afghans live and where many families still restrict their mothers, daughters, wives and sisters from participating in social activities. Not much has changed for them since 2001.

The US intervention in Afghanistan was in part justified as an attempt to prevent further violence against women and abuse of their rights by preventing the Taliban from gaining power. After the fall of the Taliban regime in Kabul, restrictions on women’s movements were lifted, but this privilege was enjoyed mainly by women residing in urban areas. The rural Afghanistan, where the majority of Afghans live, remained largely deprived of this freedom.

Likewise, the discourse on saving Afghan women primarily revolves around women in urban areas and big cities. Now that the coalition forces are leaving, women are worried about their future. They are asking the foreigners to stay longer because they do not want the dark chapter of the Taliban to be repeated. They fear they might lose the few freedoms they currently enjoy if the Taliban return to power.

The Afghan government needs to step in and protect women by punishing those who violate their rights. Even now, women who attend schools or go to work risk their lives every day. Change has to come from within. Foreigners can only introduce change to a segment of a society but cannot change the society itself. People’s perception about women’s rights has to change. What foreigners could do was to help facilitate a grassroots movement to change the perception of men about women within the society. It is probably too late for the foreigners to do something that would benefit Afghan women in the long run. Foreign NGOs will be paralyzed when foreign funds dry out, leading to an increasingly dangerous situation for women.

Billions of dollars have been poured into Afghanistan in the past decade. However, Afghans are still incapable of protecting their women. It is a shame that Afghan authorities have not yet been able to meet the expectation of Afghan women. Foreigners will eventually have to leave, so the Afghan government must help women shape their own future. Since the problems of women in Afghanistan are rooted in the traditional mindset of the people of Afghanistan, it is up to Afghans themselves, not the foreigners, to ensure that their women’s rights remain protected. The government and the Afghan men in general could help women achieve this by working together.