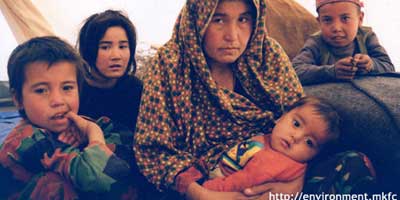 Zarmina, a young Afghan woman I know in the United States, lost her husband to a chronic illness a few years ago. She was very young when she got married to an older man in Afghanistan. Her husband had children her age from his ex-wife. He was quite strict with Zarmina when he brought her to the US, not allowing her take English classes, work, or make friends without his consent, and she compromised and quietly listened to him. He was suffering from a chronic disease from the very beginning of their marriage, compelling her to take care of her sick husband, fulfilling his wishes and following his directions. He passed away a few years after their marriage, leaving behind three children. Zarmina is young, probably in her early 30s, and she likes to wear colorful clothes, jewelry, and makeup, just like any other woman her age would. Her fellow Afghans look down upon her for not conforming to the lifestyle of an Afghan widow. Some people even say it in front of her that she shouldn’t act like a single woman. According to Afghan culture, widows have to behave, look, and think a certain way and those who don’t do so are being criticized. Zarmina is not the only widow who is being treated like this in the Afghan community in the United States. The majority of Afghan widows share similar stories whether they are living in Afghanistan or abroad. After their husbands’ deaths, Afghan widows are being looked down upon by their own family members, relatives, and community members for just being widows even in most liberal parts of the country.

Afghanistan is not the only country where widows are marginalized. Most South Asian countries, such as India, Pakistan, and Bangladesh, belittle widows. Many Afghan widows are deprived of their rights to remarry and have normal lives again. While Islam allows a widow to remarry, unfair traditions supersede religion when it comes to women in most cases in Afghanistan. Traditional cultural practices, leaving widows with limited choice about their future, are making it almost impossible for widows to remarry someone they want. The word widow or “kwanda” in Pashto and “bewa” in Dari has much negative social stigmas attached to it. When an Afghan woman loses her husband, she not only loses her life partner, but also her place in the society.

In extreme traditional societies such as Afghanistan, widows are considered as a bad omen, as individuals who bring bad luck; they are sometimes considered the cause behind their husbands’ death especially if their husbands die earlier in their marriage and are treated as outcasts by their own families. For example, during henna nights, a ceremony before the wedding when the groom’s family puts henna on the bride’s hands and the bride’s family puts henna on the groom’s hands, widows are strongly discouraged from putting henna on a bride’s hand because the bride’s family is afraid that the widow’s “bad luck” might transfer over to the bride. Widows, therefore, often do not participate in the marasims or cultural ceremonies of the wedding.

If a widow is young, someone from her husband’s family might marry her. Generally, widows cannot remarry outside their husbands’ family. When a woman loses her husband, there is a tradition of marrying her deceased husband’s brother if he has any. This is the culture; Islam does not dictate that women must marry within their husbands’ family after their husbands die. Widows are not usually given an option to choose whom they want to marry or, in many cases, if they want to marry at all; the deceased husband’s family dictates to her whom she may marry. The brother of a deceased man is expected to marry his brother’s widow, and the widow is expected to marry her deceased husband’s brother. If the dead husband has a single brother, he will marry her even if he is much younger than her. Usually, this man marries a single woman later in his life. If the dead husband does not have a single brother, one of the married brothers marries his brother’s widow as a second wife even if he is a lot older than her. Sometimes, someone else from the deceased husband’s family will marry her.

Marrying a stranger is often out of question unless the widow’s in-laws allow her to do so, which is unusual. It is considered a dishonor to the dead husband’s family if she marries a stranger. Because women are considered namus, honor, in Afghan societies, the family of the deceased husband expects the widow to remain within the family even after her husband’s death. Even if a widow has an option to marry a stranger, she might have limited options because single men rarely marry a widow no matter how young and pretty she is because she is  considered unlucky; only a widower or a man who is already married would marry a widow, making it extremely hard for the widows to remarry. Secondly, since men prefer to marry virgins in Afghanistan, they do not prefer to marry women that are not even if they know that they have remained in legal nikah or marriage of their now-dead husbands.

Some widows remain unmarried for the rest of their lives and raise their children even if they lose their husbands at a very young age. I know a woman in eastern Nangarhar Province who lost her husband during war in the early 1990s when she was in her late teens. They had been married only for a few months; she was pregnant with a boy when her husband passed away. She didn’t want to marry her brother-in-law and didn’t want to marry a stranger out of the fear of losing her son. Therefore, she chose not to remarry. Usually, in the Afghan society, women like her are considered to be of good morals. People think very highly of them and praise them all the time for being strong and patient.

It is unfortunate that some widows, in most liberal parts of the country, who remarry with men of their choice, are being held in contempt by their own family members, close relatives and others in the community; some individuals sever all their ties with them as if they have committed a crime. These women are considered of bad morals and of those who are unable to control their sexual desires. Thus, a widow has to think twice before making a decision about remarrying because she could lose her reputation in the society for doing so.

On the other hand, widowers are strongly encouraged to remarry regardless of how old or young they are. Their families think they need a wife in their lives to satisfy their sexual needs. They can remarry someone within or outside the family, and they are not considered unlucky, impatient, or immoral.

There are certain expectations and cultural requirements that come with being a widow. For example, widows, regardless of age, are supposed to wear darker color clothing. Dark colors such as black, brown, gray, and navy blue signify sadness and melancholy. It is believed that when a woman loses her husband, she loses everything. Therefore, she is to be sad for the rest of her life and that is why she is not supposed to wear colorful clothing, which signifies joy and happiness. If widows wear colorful clothing, people perceive it as their being happy after their husbands’ death.

Widows are also expected not to wear any makeup and fashionable jewelry. They are expected not to laugh a lot during gatherings and not to talk to men who are na mahram, men with whom marriage is not prohibited, to them. Even in urbanized areas of Afghanistan, widows are expected to do the above. If they fail to do all these things, people think they are not upset over their husbands’ death. In other words, she is supposed to be miserable when her husband dies no matter how he treated her when he was alive. It should appear from the physical appearance of a widow that her life as well as the source of her happiness and joy—her husband—has come to an end with the death of her husband.

How should this unfair cultural mindset and tradition that discriminate against widows change? Widows are being punished for something that is beyond their control and something that is not their fault in the first place. No woman wants her husband to die, especially if he is the sole breadwinner of the family. While widowers quickly continue with their normal lives after they lose their wives, widows suffer for the rest of their lives and can never live a normal life again after losing their husbands. Change can only occur when women are empowered enough to fight for their own rights and when governmental laws protect their rights. Education empowers women and helps them stand on their feet and fight against the discriminatory discourse on widowhood. The government needs to adopt and implement laws that end all sorts of discriminations and social injustices against widows, both within the family and community, as well as in the public spheres.