Re-visiting the Restrictions on Pashtun Women in Afghanistan 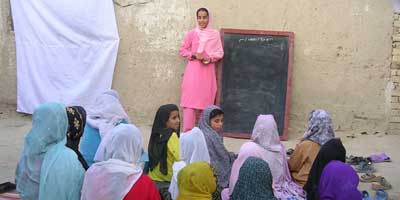 Re-visiting the Restrictions on Pashtun Women in Afghanistan

There is a common perception among some people in Afghanistan and abroad that Pashtun men do not want their women to attend schools or to work outside their homes. While this might hold some truth, most discussions on women’s rights usually point out the problem superficially and fail to explain its causes. One could wonder whether it is Pashtunwali, the unwritten moral code and traditional lifestyles of Pashtun people, that is restricting access to education and work for females in Pashtun areas, or is it simply because it is in the nature of Pashtun men to be restrictive. While there might be other factors, this article argues that the last three decades of war in Afghanistan is a major contributing factor in the denial of many Pashtun women access to education and work.

The current situation of women in Afghanistan, especially in Pashtun areas of the country, cannot be detached from the miseries of the last three decades of war. While war affected both men and women alike, women were affected more. Every time foreigners intervened in Afghanistan, the security deteriorated, limiting women’s movement outside their houses. During the last three decades of war, women have had to stay at their homes on the basis of their men’s demands because, among other reasons such as stringent interpretations of Islam’s teachings on women outside their homes, it was not safe for them to leave their houses.

In the 1980s and early 1990s, Afghanistan was used as a proxy battleground for the Cold War between the Soviet Union and the United States, and the “accepted doctrine was that America would not overtly reveal its hand in a proxy war with the Soviets, and therefore the CIA worked through its ally Pakistan” to get involved in Afghan politics.[1] It was easier for Islamabad to exploit and mobilize Pashtuns than other ethnic groups within the country due to Pakistan’s physical proximity to Pashtun dominated regions of Afghanistan. This directly impacted women’s movement in Pashtun areas where the mujahidin insurgency was the highest. The so-called holy warriors (the mujahidin) were able to defeat the Soviet-backed regime in Kabul, but at the expense of women. When the communists left Afghanistan, American help also dried out, leaving Afghans to shape their own destiny.

International interest in Afghanistan waned in the years that followed the collapse of the Soviet-backed regime. The different mujahidin factions began fighting amongst themselves over power and control of the city of Kabul. The country was split between warlords, each trying to dominate their own regions. These warlords were not very supportive of female education or females in the workforce. The civil war during this period restricted women’s movement, detaching them from political and social arenas. The darkest age for Afghan women began during this civil war, which resulted in complete breakdown of law and order. Lack of law enforcement gave an opportunity to religious extremists, within the mujahidin factions, active in the Pashtun-dominated areas, to restrict female mobility based on their interpretations of Islam’s teachings. According to a principle of Pashtunwali, Namus (honor), a Pashtun man has to defend the honor of his women at all costs and must protect them against any kind of harms. Pashtun men living in these areas were responsible to protect their own women because the government failed to do so for them.

Even though the civil war ended when the Taliban assumed power in Kabul, the war against women continued or further intensified. As the Taliban came into power, women became invisible in public spheres. To them, a woman’s place was either at her home or in her grave. The Taliban’s severe restrictions on women’s freedom of movement imprisoned women in their own homes. Women were unable to fight for their rights or ask for justice. They were forgotten by the international community until 2001 when 9/11 occurred and US-led coalition forces intervened in Afghanistan, toppling the Taliban regime.

The US intervention was, in part, justified as an attempt to save Afghan women. The intervention resulted in freedom and mobility for women. However, this freedom was enjoyed by a few women living in the cities. The situation for women in the villages of Afghanistan, where the majority of population lives, remained unchanged or similar to what it was during the Taliban regime or the mujahidin reign. These rights were hardly enjoyed by Pashtun women due to increasing insecurity in Pashtun dominated areas of the south and east. The Taliban still have an active presence in the Pashtun areas, and their policies remain the same towards women.

Therefore, Pashtun men living in areas that have been under the control of Islamist groups including the Taliban during the last three decades of war, have prevented their women from working outside the home or going to school, partly because of a lack of security, a lack of law enforcement, and extremist views of the insurgency towards women—all the by-products of the war. Radical groups in the position of control or power have threatened, abused, and killed female leaders in order to discourage other women from asking for their rights.

It is noteworthy that from the 80s until now, the mujahidin factions and the Taliban have been ideologically opposed to modern education and female education. Many girls’ schools were closed down during war in Pashtun-dominated areas due to a lack of security. Many girls’ school are still paralyzed in Pashtun areas and Pashtun men have no other option but to have their women stay home because it is not safe for them to leave their houses.

As the US withdrawal date is nearing, the fate of Pashtun women remains undecided. Many questions such as whether the Taliban will stay active in Pashtun-dominated areas remain unanswered. If so, what would happen to the future of female Pashtuns living in these areas? Will they ever enjoy the freedom that women in the cities do or will they once again be forgotten by the government and the international community?