Remembering December 16th: 'They were not martyrs - they were school children' 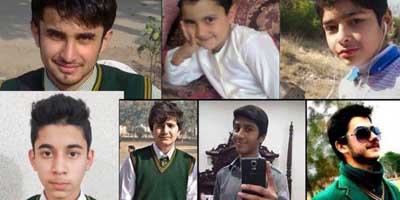 It was 11:15 am on 16th December, 2014. I was at a review meeting for the long pending Domestic Violence Bill with a small group of MPs at the Provincial Assembly of Khyber Pakhtunkhwa, just about 4 km away from the unfortunate Army Public School, Peshawar.

As the meeting, supposedly to be the last one, had just started examining the proposed draft of the bill, the small muted TV screen in the corner of the room started flashing breaking news about the carnage. The discussion paused as everyone around the room peeked at the TV screens.

The news channels reported three injured including a teacher. Four, six, eight and thus the numbers kept rising horrendously. Appalled, everyone in the room grabbed their phones and started connecting with their families. The meeting was called off. Some were over phones, while others were running through the TV channels. Panic gripped everyone when the Provincial Chief Minister appeared on the TV and formally announced eighty casualties within three hours of the siege. I felt sickened and lost. We wanted to leave immediately but the security situation outside wasn’t favorable.

As we awaited the clearance signals beside the guarded entrance, the military helicopters came roaring to monitor the rescue operation in low flight above us. Soon we were cleared. I immediately left, stunned by the casualty figure. I had decided to go the hospital where the injured were being taken and blood donations were being received. Worrying about the habitual traffic congestion, I left. But my fears wore out soon because the road was completely empty, the otherwise jam-packed road today wore a complete deserted look. Like a bleak apparel that the city of flowers and story tellers seemed to have become familiar with in years following 9/11.

The air outside was gloomy and filled with uncertainty, as it always is, when the city helplessly witnesses bloodshed from suicide attacks and bombs targeting security forces, police convoys and check-posts, markets and bazaars, mosques, churches and funerals, ruthlessly and callously, every single time. May be I had turned oblivious to the fact, as someone rightly remarked, that one can never get used to tyranny.

At 02:45 pm I was at the hospital. The usually disciplined military run medical facility today was a picture of sheer chaos. The space outside the central emergency unit was densely crowded with people – agitated and frantically demanding to be allowed to see their children inside the emergency unit.

Men and women were seen mourning in every corner – men and women who were fathers, mothers, brothers, uncles and aunts to the children, were pleading with the medical officers in the military uniforms for seeing their children. With a heavy heart, I rushed to the blood bank lying on the far side of the emergency unit. The blood bank was already in sufficient receipt of donations so I only registered my blood group and contact details and left.

As I walked past the emergency towards the exit gate, a voice of a lamenting man intercepted me. A father was wailing his teenage son, killed in the carnage. "Have patience, he is a martyr’" said the medical officer in the military uniform in a low voice to the mourning father. The father now crumpled on the ground screamed, "no he is not, he was in the school, he was not in the battle field, how could he be a martyr, he was not at war, he was yet to grow up, fight for his country and be killed as a martyr, no my son is not a martyr he was only a school child".

I could no longer stay there. It was very difficult to stand tears of those who had learnt the fate of their kids and equally painful to see those who still did not know where their child was. Unable to stand it anymore I rushed to the exit that lay only a few yards now and stepped out.

But alas! leaving the main building was no respite, hardly a few steps from the main gate a boy in his early twenties was mourning, ‘walay ya khudaya, walay’ (why o dear God, why this had to happen). He had lost his younger brother, a passerby told. My heart sank. I reached my car and collapsed in the passenger seat.

The price for the regional peace had this time been paid by our children - our children who were not in the battle fields but in their school only and as the mourning father said, they were not martyrs – they were only school children.

Amna Durrani is an advocate for peace and women human rights.
Born and raised in the emergency prone Khyber Pakhunkhwa Province of Pakistan, Amna is Provincial Coordinator at Khyber Pakhtunkhwa Commission on the Status of Women.
She is passionate about promoting peace in the region by developing women and youth leadership though policy, advocacy, capacity development and implementation measures.
She blogs at 5-2midnight.blogspot.com and tweets at @MinaDurrani