The True Cost of our Clothes 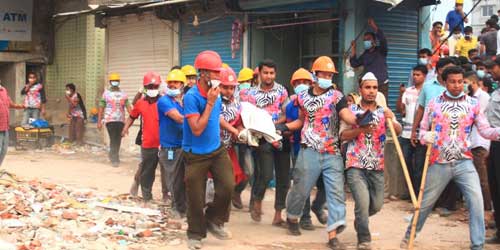 Gone are the days when our clothes were strong, dear and durable. Gone are the days when a suit lasted a man a lifetime. Today, most of our clothing is cheap, fast, and poorly made. Colours wash out, threads unravel, and holes magically appear in tight spaces. As more and more of us partake in fast fashion, the question of ethics looms bigger and broader. With clothes so cheap today, who exactly is paying the real price for our clothes?

Cheap clothing might be a blessing to many of us, especially post-2008, after the global economic crash, and the rising gap between the rich and the poor. Yet it remains a global problem because of its dear cost to others: to people in developing nations. Not only do we poison our environment, killing our planet, but we pass the true costs of our clothes to persons in developing countries, further entrapping them in modern day slavery, sometimes at the cost of their lives. Our £10 jeans, and £5 ballerina shoes might be affordable, but they contain the blood of national tragedies, such as the Rana Plaza factory collapse in 2013 which left 1,130 workers dead, and many injured, or the Bangladesh clothing factory fire of the same year.

Each year, in Britain, we spend a total of £59 billion on clothing and footwear, with each individual spending an average of £900 on fashion each year, a significant £200 more than the £700 EU average. With the presence of many fast fashion retailers in the British market, such as Zara, H&M, and Forever21, I spoke on condition of anonymity with one the U.K’s leading clothing retailers to better understand today’s fashion industry. Operating within 1,400 factories across the world, in 40 countries, this well-known retailer spoke assuredly of knowing where all their garments come from, as well as the working conditions of employees in each factory. Furthermore, they maintain their discourse of total visibility, honesty and ethics in their entire manufacturing process.

“We do not use a checklist system. We don’t use third party auditing. That way we can assure complete visibility. If you don’t know where your products are being made, how would you know what the working conditions there are like?”

If this clothing giant is able to ensure such honesty and accountability in their manufacturing chain, as they claim, then why does this ethical standard remain impossible for many British clothing retailers, including the ever-popular Primark, a company linked with Rana Plaza at the time of its collapse? In 2014, Primark recorded profits of up to 30%, as the British public soared to their offering of fast fashion, further imposing the question of accountability upon the fashion industry. Amidst the clothing giants, the consumers, national governments, the factory owners, the stakeholders, and even the trade unions, who has the greatest ethical responsibility towards workers in clothing manufacture?

“Ultimately, consumers need to understand that ignorance is not an excuse’, debated a staff member of the clothing giant I interviewed. ‘It’s up to them to wake up and take responsibility. Fast fashion puts pressure on working hours, overtime, factories, and the environment. It’s ridiculous buying something, only to wear it for three days and throw it away. Think about the environmental impacts, plus the social impacts. That is not a culture that people should be buying into.”

Arguments concerning accountability point fingers at all participants in the fashion industry. However, should consumers demand fairer and more ethical codes of practices for those who make their clothes, would clothing giants finally step up to their ethical responsibility? And where does accountability from these clothing giants begin and end?

When I contacted Primark, a few years ago, to ask about their codes of practice for their clothing manufacturers, they assured me of ethical practices, citing that they provided a fair wage to workers, in safe working environments. This was, pointedly, before the Rana Plaza factory collapse, whose victims have described being bullied to return to the factory, despite their fears for its safety, in an attempt to meet shipping deadlines.

Concurrently, should we completely stop purchasing these clothes, workers from developing countries could lose their jobs and their source of income. Even worse, this would lead to the financial breakdown of these nations, particularly nations such as Bangladesh, the world’s second-largest exporter of ready-made clothing. Nevertheless, to prioritise financial provision at the cost of human lives seems an attempt to defend an oppressive consumerist system – one that pays people working in substandard working conditions the bare minimum, in return for mass company profits. “After all”, as one clothing executive pointed out, “if you buy a pair of jeans at $9.99, what are you really expecting about the working conditions of those who made them or even just the environment in which they live?”

In clothing manufacturing factories worldwide, men and women work daily to produce clothing for the mass. However, the manufacture of clothing has another downside being side-swept by the media today. Environmental pollution. In our rush to produce cheap, fast clothing, Western nations are actively polluting the environment with their clothing and fashion choices.

An article from The Guardian reporting on Bangladesh's women taking charge of their lives – from the grassroots to the workplace, reports:

“2014 UN report from the Intergovernmental Panel on Climate Change showed that greenhouse gas emissions grew twice as fast in the first decade of the twenty-first century as in the previous three decades. Too often, Americans point to China or India as the drivers of these emissions to say there is nothing we can do at home, but in fact much of the emissions in Asia come from burning coal for factories producing goods for American and European markets.

The UN report stated, 'A growing share of CO2 emissions from fossil fuel combustion in developing countries is released in the production of goods and services exported, notably from upper-middle income countries to high-income countries.'”

According to University of Rhode Island Professor of Labor and Environmental History (USA), Erik Loomis, this environmental pollution ultimately leads to the poisoning of those who live close to these factories, oftentimes damaging people’s health. With pollution, and an economic workforce similar to sweatshops, Human Rights Watch has found that women in developing countries where clothes are manufactured, such as Bangladesh, “regularly face ill-treatment and poor working conditions inside factories”.

With better financial independence, and more female leaders in major societal institutions, one can only hope that increased pressure will be placed upon both the government, and the clothing retailers to provide fairer pay, as well as better working standards for its workers.

The journey to a fairer system in clothing manufacture must begin somewhere, be it in developing nations, among clothing giants, amidst consumers, or even the workers manufacturing our clothes.