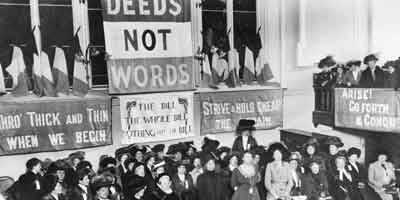 A suffragette meeting in Caxton Hall, Manchester, England circa 1908. Emmeline Pethick-Lawrence and Emmeline Pankhurst stand in the center of the platform. Circa 1908. Photo: Wikicommons - The New York Times photo archive

By Louise Hogan - Global Correspondent for Safe World for Women

It’s no secret that the UK lags far behind other European countries in terms of gender equality in politics and public decision making. However a recent report entitled Sex and Power 2013: Who runs Britain? highlighted the painful truth that progress is excruciatingly slow, with the number of female MPs increasing by less than 4% since 2000. The report also highlighted some depressing losses, such as a 4.3% decrease in the number of female Cabinet members, during the same period.

Who’s making the decisions that matter?

Sex and Power examines gender equality not only in politics but in areas which can be generally termed as ‘public life’ including the judiciary, education, health services, media, financial sector and others. The report views gender equality through the prism of decision making positions. This is important as we know women may have achieved equality in terms of third level education and entry level professions but as the pay grades get larger and the responsibility grows, gender equality decreases quite dramatically. Only 12.3% of Council Leaders, 15.6% of High Court Judges and 14.3% of University Chancellors in Britain are female.

Is it elitist to rank equality in terms of decision making?

Of course not. Diversity is important and it’s true that gender equality is important across all sectors. But if we are looking at the issue of power, we must examine the realm of decision making. As the authors of the report note “We wholeheartedly agree that there is much more to gender equality than just who occupies well-paid and influential jobs. But these are spheres in which great power is exercised, not only financially but in terms of culture, access to education and training and the maintenance of civil rights and the law.”

Only Ireland and Italy rate lower in terms of gender equality in Europe. To deal with this, the Irish government have introduced electoral quotas which stipulate 30% of candidates put forward by political parties must be female.

Gender quotas are a contentious issue, with some people arguing they are undemocratic or that such a system produces ‘token’ female representatives. Electoral quotas only apply to the number of candidates put forward however, not to the number of deputies elected to parliament. Thus, they are certainly not undemocratic.

The ‘token woman’ argument is also not an entirely valid one. Firstly, when 50% of the population is female, any of them are not token but are entitled to be democratic representatives. Secondly, often this issue stems from political parties not sourcing or encouraging suitably qualified and dedicated women into politics. Think of Romney’s infamous “binders full of women” comments. There are so many eligible, educated and qualified women out there but often the established system excludes them from the process.

How do we start moving forward again?

The group behind the report, Counting Women In Campaign which aims for 50/50 gender representation at all levels of local, national and devolved government in the UK, has six key reccommondations for things to be done by various bodies and organisations to ensure more progress is made on this issue. Their recommendations include urging political parties to be proactive in selecting greater numbers of female candidates, including the use of affirmative action; the introduction of a pilot mentoring and training scheme for women in politics by the UK government and  making women more visible in all aspects of public and private life by ensuring panels contain women speakers, etc.

None of these steps are unreasonable but all rely on political will and a genuine commitment to change the current political culture. Despite half-hearted assurances from Cameron and Clegg that gender equality is an important issue for their government, the reality indicates otherwise. If serious change is to happen, serious promises must be made and kept.

Further articles and blogs by Louise