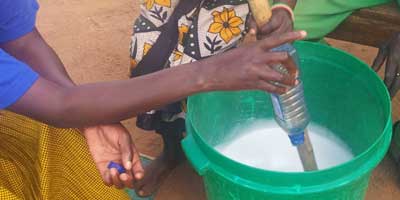 Following on from my previous blog, I am glad to say that Timothy's attempt to poison the rest of the AWARE staff, while spraying termites, was unsuccessful... :)

How you actually make soap

More importantly, I want to tell you about Josephine - a volunteer at AWARE, who concentrates largely on hygiene and sanitation issues.

Josephine came yesterday to collect the chemicals she had stored at AWARE and to show me how to make liquid soap.

She had been given the chemicals at a workshop as a start up and was now ready to use them to make a commodity for sale.

The process is very simple and requires only the chemicals, water, a bucket and a stick. Before long though, there was a large crowd peering in at what we were doing.

Firstly, glycerine and salt are mixed together - apparently it is important to make sure you only stir in one direction, so a lot of people all took turns; I even had a go - but as a weak Mzungu, was just laughed at!

After that, the salt is well and truly mixed in; then some water is added followed by another chemical and then the caustic soda.

Apparently, there are some other things that are just too expensive to buy here.

After the chemical reactions have all taken place, and lots of water is added, then dye and perfume is added.

The perfume was my favourite bit - it really smelt good enough to eat.

The perfume is made from local flowers that are dried, soaked and distilled.