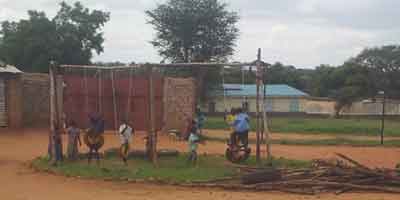 New swings in the AWARE compound

Over the months, I've been pretty clear about how frustrating it can be - walking into an established organisation and trying to make changes didn't always work out; but for a combination of reasons there has been a rush of motivation at AWARE Uganda in the last couple of weeks.

We have three brilliant new volunteers, Gloria, Juliana, and Charity, who've taken the roles of Gender Officer, Assistant Field Officer, and accountant respectively - which has given the rest of us time to get a mission on with other things, including a complete re-organisation of the administrative framework, with the aim of creating better transparency - which is always a good idea when you are working in a developing country.

Also Grace [founder] decided that, due to the new staff, we needed another office - and decided that we should just get on with it.

It is amazing how quickly the builders can work here, when not hampered by trivialities like health and safety: I was pretty horrified to see that scaffolding here is just a few poles lashed together, but apparently the builders had no concerns about it. As you can see, the office is ready for the roof, doors and windows and it only took four days!

Unfortunately, all the extra materials need to be brought from Lira (a five hour drive away) because they aren't available here which is delaying completion!

We've also been temporarily been joined in the office by Steto, who's about to graduate from university; he's doing some research on GBV [gender-based violence] and knows Grace's family back in Kampala, but comes from Kaabong. He has made many of the changes that I wanted to, but he was bright enough not to ask permission and just get on with it, unlike me. So the existing offices are now clean and much more organised. It never ceases to surprise me how much difference a tidy work environment makes.

New Swings for the Children!

My favourite development so far though, has to be the new swings that have been put up in the compound for the children - although it does make it a bit harder to work as all I want to do is play all day! (I did learn my lesson a bit though, when I got blisters on my hands from the ropes). They are kept tied up during the week days, ostensibly to make sure the children attend class, but I think it is conspiracy to keep me in the office!!

The other major change here is that the field officer/acting manager has decided to leave the organisation, which is a bit inconvenient - and largely because of me. But every cloud has a silver lining - it has greatly improved the atmosphere in the office, partly because all the full time people here are now under 30, and partly because the guy was incredibly resistant to change!

Oh - and if no one hears from me, then it's because Timothy has poisoned me. He says that he is spraying to protect against termites, but considering how ill I feel, I am starting to consider the possibility that he's trying to take over the world - starting by killing off the AWARE office staff!!