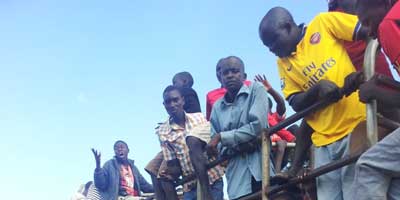 One thing I must say about Kaabong is that, despite the difficulties of life here, the people really know how to throw a party.

With the 9th June being a public holiday, the day (Sunday) before there was a massive day planned to celebrate Arsenal winning something or other. I have absolutely zero clue about football, but it didn't stop me joining in the revelry.

In the morning, a volleyball match was organised in town between Manchester United fans and Arsenal fans. It was just a good excuse to chill out and have a bit of good natured rivalry.

I went with Steto and watched the games; I don't really understand volleyball - having only watched a few games, but the umpire was pretty lax which meant it was a good laugh with lots of good-natured arguments over whether the ball was in or out.

After a quick stop at home where we picked up Lydia (and named the day "Lydia's Day of Fun"), we started to walk to the football.

Luckily the Speaker (a member of the local government), saw us in town and offered us a lift. It would only have taken half an hour or so on foot, but still the afternoon was pretty hot so it was a relief.

Football really isn't my thing, but Steto was playing and Lydia was enjoying her well-deserved day off, so it was actually quite fun.

Everyone here is mad keen on football and ardently support their favourite English club, so there was a great atmosphere. The only down side for me was that I hadn't applied my sunscreen carefully enough and ended up with a very red nose and back of my neck!

After the match there was a procession.

About 15 motorbikes, three cars, and a lorry full of Arsenal supporters, drove up to the next Trading Centre and then all through Kaabong tooting horns and waving leafy branches while yelling out "Arsenal" as often as possible. It was a lot of fun to watch everyone watching us and cheering!

Then we went home for a quick bite to eat and to get ready for the evening.

Kaabong has one 'nightclub', which is a hall at the back of a hotel, but everyone crowds there. We (Steto, Lydia and I) went a bit early and discovered that elections were taking place, so we went for a wander around town and sat in another bar to wait for the appointed time to return.

I'd only been to the nightclub once before and I had been too tired to enjoy it, but with people my own age it was a lot of fun; we drank warm beer and danced a lot.

Lydia is a brilliant dancer so everyone wanted to dance with her - I kept losing her in the mass of people that surrounded her. Everyone wanted to dance with the Mzungu which started off as flattering, especially as I am an atrocious dancer, but ended up being a bit much - and Steto, the Speaker, and my friend Ibrahim (who is Agnes' son), alternately acted as my bodyguards - vetting the people who were allowed to come and dance with me, and pushing away the ones that they didn't deem suitable.

Suddenly we realised it was 6 am, and that Grace would probably not be terribly keen on us being out so late - so with the sky lightening, we walked back to AWARE and to our beds.

Needless to say, the next day (having only got three hours of sleep,) I felt dreadful; Lydia being only 21 was perfectly awake and alive all day, and Steto, who is also younger than me, recouped after a cup of tea and a couple of hours. I felt very old and decrepit but it was definitely worth it.