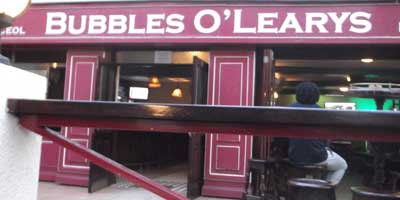 Lake VictoriaUp to now I have mostly concentrated on telling you all about how things are in Karamoja but seeing as I spend so much time in the capital for one reason or another, I thought I would explain life there.

So this time I had to leave Kaabong to meet a university friend who was passing through (the very talented journalist Sally Hayden - look her up she's written some very interesting things).

Botanical Gardens at EntebbeHaving a friend in Kampala, even though it was only for 36 hours, gave me a chance to do something touristy so we did a whistle-stop trip down to Entebbe to visit the Botanical Gardens and dip our toes in to Lake Victoria.

That evening we headed to the Irish bar: Bubbles O'Leary. Well worth a visit for anyone who plans to come this way and actually owned by an Irish guy, who I subsequently met and who gave me a wonderfully knowing look when I said I'd lived in Ballsbridge!

Bubbles is the type of place everyone goes to: Ugandan, Mzungu or whatever else, you are likely to find someone to talk to: from US Marines to aid workers and Ugandans working for the government to random people just looking to have a blast! The music is what I'm are used to hearing at home and the beer is overpriced but, in British terms, it's the difference between 75p and £1.50. It also finally showed me the world of making friends and networking in Uganda.

It turns out that the meetings that you go to just aren't as good a way of meeting interesting people as going out and having a couple of beers. It was also nice for me to let my hair down and have a few hours away from grant applications.

Karamoja is a magic word, if a young Mzungu girl says "I work in Karamoja", you have a guaranteed audience, which is perfect for me to spread the word about AWARE. Most Ugandans seem to think of Karamoja as a separate country; going there is like visiting the moon - inconceivable - and the other Wazungu are surprised that anyone would go up there without the backing of a large Western NGO.

This networking over beers also came in jolly useful when my visa needed renewing and for finding a possible buyer for the jewellery that the women at the centre in Kaabong are making. I've also been taken to the Ministry of Tourism for a meeting and to see the Ugandan National Rugby team play. Really knowing people in Kampala does make it an incredibly fun place to be!

The only downside to this way of life, apart from the irreparable damage to my bank account of course, is that I end up feeling a bit guilty when I consider the difference between my life in the capital and my life upcountry, but I am sure another beer will sort that right out!