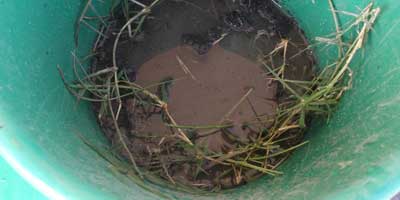 Leeching lye in a barrel as my next experiment in soap-making. Soap is a much-needed commodity in Kaabong.

The long journey to Kaabong again

After a short break in Kampala, recovering from having an abcess removed from my foot, I started to feel a bit useless again and so headed back to Kaabong.

This time I avoided the 18 hours horror of a journey that I did last time and stopped for the night in Lira, thinking I could at least charge my phone etc. and make it easy to communicate regarding the time of my arrival. Of course, I forgot that this is Africa. Despite my hotel having electricity, the sockets in my room didn't work. This, combined with the fact that the bus left at 1pm rather than 10am, as the very nice bus guys had told me in the morning, made me a little worried that I was going to get stuck in Kotido, on the way, overnight.

Luck was on my side and I found, when the bus arrived at Kotido, that there was a lorry there with space to take me to Kaabong that night. My feeling of relief gradually subsided, however, as I discovered quite how slowly lorries have to take the Kotido-Kaabong road - the 60-70km journey took three and a half hours, and was uncomfortable to boot!

Arriving in the night - but not quite Kaabong

The lorry also didn't exactly end up where I wanted it to. The driver reached his destination a bit outside of Kaabong town and refused to go any further, so I was left with a 20 minute walk in pitch black with my rucksack and only a slight idea where I was going.

I'm not sure it was luckily or not, but two very high guys - who were constantly chewing on this local plant that acts a lot like amphetamines, decided that they would walk me to the AWARE Uganda compound. Don't get me wrong - I was very grateful to know which way I was supposed to be going, but there is something vaguely disturbing about walking in the dead of night with two complete strangers who keep emphatically talking about exactly how nice they are.

I was very glad when Timothy, Lydia, and Stella rushed to meet me at the gate and showed me to my familiar bed!

I arrived just in time for the Easter Weekend. Seeing as I am not religious, it wasn't a massive deal for me, but I'm not going to lie - a four day weekend is always appealing. The only Easter tradition I partook in is the all day drinking that happens on Sunday.

Although starting on the beer at 1pm, considering what a lightweight I am, was probably not my best idea... or maybe it was. I had a lot of fun trying to convert the LC5 speaker, National Resistance Movement representative and other assorted local big-wigs to my (admittedly very moderate) brand of socialism. I'm not sure they were ready to get on board with it though!

Kaabong Hibiscus WineI think in an attempt to shut me up, I was given more booze: this time in the form of mango and hibiscus wines.

These are produced locally just at the edge of town and taste surprisingly good, if a little sweet.

Then I was given a lot of roast goat and we headed back to town for my first time sampling Kaabong nightlife. This has the atmosphere of a village hall/primary school disco with booze thrown in. But I may be judging harshly, as all I wanted to do was go and sleep off some of the booze and my patented "just disappear off home and leave my friends wondering if I am alive" trick is a beyond terrible idea in Kaabong - due to security/the likelihood of me falling into a ditch in the dark.

Another attempt at soap-making

Then back to work! My pet project at the moment is soap - as many, many people know from me banging on about it an unnecessary amount.

I think in my last blog, or may be the one before, I mentioned the disaster area that was my last try. Well, after a lot more research online, I decided to set up a lye leeching barrel at AWARE.

It seems pretty simple: find container, insert stones and grass, then add ash and water, and leave for a few days - so this is what I am doing. The waiting part is a bit of a pain; patience may be a virtue, but it isn't exactly my strong suit!

Jewellery-making enterprise for the women

While waiting hopefully for the soap, I have also been trying to help set up a small jewellery-making enterprise with women from AWARE. Who knew how much planning this stuff took?!

There are times when I really think maybe I should have studied for slightly more practical degrees! Otherwise, I have been helping admin-wise and bimbling around town trying to look like I know what I am doing; but that was pretty standard for me before I started this internship.

Oh and I mustn't forget to mention the Maternity Waiting House! When I got back I was glad to see it was still occupied. When I arrived there were two women, but on Monday night, one of them had her baby. Very exciting!

I'm not really involved with the Maternity Waiting House as a) most of the women who come there don't speak English and b) I'm not a nurse - so my presence would be stunningly unhelpful, but everyone tells me it is a huge success and hopefully we will have more women coming soon!

I realise this post is much more about me and not so much about AWARE and work, but I've always been a bit self-absorbed and also have finally settled into more of a routine at AWARE, so there is less to tell. I hope to have something more interesting to relate next time, but this will have to suffice for now!