Linnet Griffith-Jones: Being Nursed in Kaabong - the Drama of My Foot 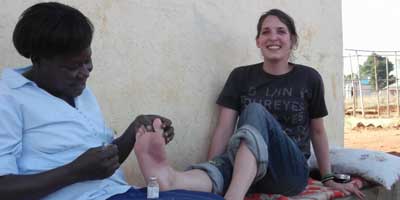 'After posing with the needle for a photograph, we started...'

I am dedicating a whole blog entry to the saga of my foot, as it has pretty much taken over my life at the moment. Also I have some pretty gruesome photos I want to share!

During my second week in Kaabong, I realised it was painful to put weight on my right foot.

Of course me being me, even as the pain got worse and a rash seemed to spread over the next few days, I maintained it was a bruise and would heal soon, especially after Grace Loumo [founder of AWARE Uganda - also a nurse] checked and said that it wasn't jiggers - which was my main fear as soon as it became apparent that my foot was not OK. I was fully determined not to have jiggers!

After hobbling for three days and not sleeping for the same amount of nights, I was forced to admit I might have been wrong - my foot wasn't healing.

I was driven the two minute drive to the hospital, where a doctor was waiting for me: massive advantage of having a nurse as one of the really active members of AWARE Uganda - no queues for medical attention.

A nice doctor prescribed me a shedload of antibiotics and anti-imflammatories and Grace and Margaret (Sister Ajilong, the nurse involved in AWARE) told me to rest, which I was happy to do as I was in a pretty decent amount of pain.

After a false start, where I felt better for a few hours, I spent most of that night awake and the next day was in agony again.

All I could do was sit in a chair with my foot in cold water, which is not as easy as it sounds as the water kept heating up in the sun. So I kept limping around changing the water - and then feeling guilty because I knew this would mean the twice weekly regime of filling up jerry-cans and hauling them across the compound would be accelerated because of my wastefulness.

Only solution - cutting open the foot

Then I really gave in and called Margaret to come and examine me: she saw that the pus was coming up to the skin so there was really only one option - slicing into my foot to relieve the pain. This cheered me up a lot, being one of those people who find medical procedures fascinating - especially when I can watch.

Nurses Agnes and MargaretI was given the option of having it done at the hospital or at the AWARE compound - I chose AWARE, because I reckoned I would have more privacy and a shorter walk to bed! Not going to lie - it was one of my better ideas.

Margaret disappeared to the hospital for supplies, which mercifully included local anaesthetic, and picked up Agnes (another member of AWARE who also trained as a nurse) to assist.

Then, with Lydia bringing a blanket and pillow, I was stretched out on the 'veranda' around the main AWARE building and we were ready to begin, as soon as I had organised for people to take pictures of course.

After posing with the needle for a photograph, we started.

Agnes had to hold me down! I don't know why nobody ever says it, but having a large syringe full of Lidocaine splurged into you is bloody agonising.

I am pretty sure half of the surrounding area heard me screaming my head off as Lydia held me down.

Then the Lidocaine kicked in and I was one happy bunny, except I couldn't get a decent view of what was happening - even when I tried to sit up a bit.

After a lot of prodding and squeezing it was all over; Margaret and Agnes left with the promise of an injection of painkillers to be administered later, before bed.

For a blissful 20-ish minutes, I enjoyed a pain-free existence; unfortunately, it wasn't to last and the Lidocaine wore off.

All I could do was lie wrapped in my hoodie and shake with pain and try not to scream my head off while Grace, who had been out visiting someone in the hospital while the procedure was taking place, and Josephine (another member of AWARE) looked after me and gave me tea.

On a sidenote - seriously, tea makes everything better. I must have drunk a gallon of the stuff while Lydia went and fetched some painkillers from Margaret.

Margaret came herself later with a massive needle of painkillers and for the first time in nearly a week I was pain free.

The next day, feeling A LOT better, I was coerced into seeing a traditional healer.

I was pretty sceptical beforehand and what happened didn't really change much. I was told to sit in a chair while an elderly woman held a filthy looking pot against my foot, including the incision point. In the pot was a mixture of what looked like cow dung and water, which she swilled around, and every now and again she would pull twigs and things like that out. Apparently these were the causes of my pain, although how they were hiding under my skin I am not entirely sure.

Anyway, I smiled though the ritual, or whatever you call it, except for the point where she spat on my foot; I mean seriously that is just gross even if you don't have an open wound to keep clean! After she left, Grace cleaned my foot with boiled water which put my mind at ease and it was decided that I would leave for Kampala the next day.

Although this time I really didn't want to leave, Kampala's a better place for me to recover than Kaabong, what with it having at least some flat surfaces for me to limp around on.

This time I was genuinely sad to be going, although the idea of running water, a flush toilet and (pretty much) 24 hour electricity wasn't unappealing.

One thing that I am still getting used to is how concerned EVERYONE is; I can't limp down the street either in Kampala or Kaabong without a good 90% of people I pass telling me they are sorry, asking what happened and a large proportion of them wanting to see my foot.

I am still hobbling around at the moment, but as soon as I am back on my feet (HAHA!), I'm looking forward to heading up-country again - although this time hopefully I can get some work done instead of having the whole staff and half the members of AWARE and many others looking after me (superb job they all did though!)