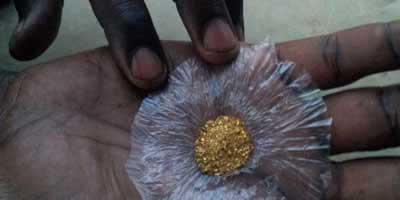 Staff are busy in the field 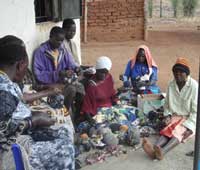 Members of AWARE making dolls and balls from rags and socks.After using the weekend to settle back into Kaabong life, I was really glad to get some work done - the major question was where to start.

The main problem here is that there is so much to do and very little to do it with, both on an AWARE office scale and a regional scale.

Most of my time was taken up with administrative work, re-organising files, writing job-descriptions out, trying to work out a schedule for arts and craft, hygiene and other lessons and things like that, which have been left undone due to the chronic lack of funding and staffing.

All the staff are volunteers and have even more important and urgent things to do. Luckily my slightly obsessive-compulsive tendencies mean that I enjoy this sort of thing, so am happy to take it off the others' hands.

Before I came to Uganda, I was fully convinced that grassroots work and education are the key ways to bring people out of poverty, but the more time I spend here the less clear-cut it seems.

I still whole-heartedly believe that grassroots work is massively important to development, but I am starting to see that without some pretty huge changes it can only have a limited effect.

Wealth is inaccessible to grassroots women

Karamoja has a ridiculous amount of gold and gemstones; I actually held a massive lump of raw emerald one evening. However, getting at them is stupidly hard, the equipment for mining is in the hands of large (mostly international) companies and, even if the locals can get hold of the resources, they have no decent access to markets so usually they have to sell to middlemen who are the ones who make all the profit.

The roads are so bad it takes two hours by public transport to travel the 60 kilometres to the only local town connected to the rest of the country, and it costs the same amount of money as feeding an entire family for a week; buying one litre of fuel for a generator to give you electricity for a few hours a day (if of course you can afford this luxury which most can't).

It is hard to see how anyone, let alone women who are usually the worst off, can access the things that will help lift them out of the crippling poverty which is endemic.

I'm not joking when I say people have to choose between spending their 500 UGX on a cup of cornmeal for posho or spending it on soap - and that's in the town. Outside of town, many people survive on wild greens and the odd cow they slaughter. Soap isn't even considered.

I don't mean to moan. There are some awesome local NGOs here doing all that they can to bring peace and prosperity to the region, but it is extremely disheartening sometimes to realise how absolutely useless most efforts are.

For instance, a great organisation came to AWARE to teach women how to make liquid soap; absolutely brilliant - and as they left some of the expensive chemicals behind it will be a great way for some people to make money selling it, but the chemicals are ridiculously costly for people here and have to be imported from Kenya - making both the finished soap and the ingredients prohibitively costly for most people.

My failed attempt at soap-makingI tried to help with my own soap project, which uses only boiled ashes and meat fat to create bars of soap.

However, unfortunately my first attempt was a disaster - as the ashes didn't produce the lye I needed - so I just ended up with slightly watered down fat!

But I won't be defeated and attempt two will take place after a bit of further research (as always, suggestions welcome).

On a brighter note, the maternity waiting house is back up and running, and the first group of expectant mothers have arrived!

We are all so excited - as not only do these women, many of whom are referred as their pregnancies are deemed high-risk, have a safe space close to the hospital to wait in, but it also will provide them with opportunities to learn new crafts, skills and knowledge that they will be able to, hopefully, put to good use!

Rain! A Blessing in Kaabong

Also as the short rains are starting Kaabong has become much cooler - while everyone else huddles in jumpers and fleeces complains about how cold it is, I have been in my element - standing in the rain getting soaked and still not cold enough to put my hoodie on most of the time.

The rains are not just good news for me though - it means that AWARE's tractor is being hired out most days to plough gardens and planting will start soon!