Linnet Griffith-Jones: Back in Karamoja 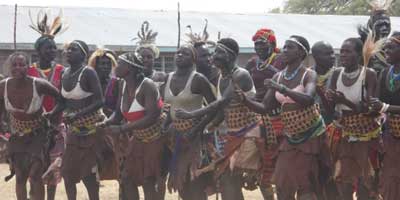 Family swap! Grace Loumo & her husband, 'the Colonol' in the UK meeting my parents, while I'm in Kaabong with AWARE.So after chilling in Kampala for a month, partly waiting for Grace (founder of AWARE) to get back from the UK where she was visiting family and meeting mine, I realised it was high time for me to get back to Kaabong.

At 3 o'clock in the morning, I boarded a bus headed for Kotido.

Of course, this being Africa, I waited on the bus until a bit after 4 am for it to leave, but finally we set off. The journey wasn't exactly fun-filled, but once dawn came I could at least look out of the window while I was jolted around. Even the tarmacked roads are mostly only wide enough for one vehicle, so every time you meet another the bus veered off with half of its wheels in a deep gully.

It was a 16 hour journey, with all the stops at towns that became further and further apart as the tarmac disappeared and Karamoja got closer, but I was lucky enough to encounter a few people also going to Kaabong - they promised to help me find a place in a taxi for the final two-hour leg of the journey, so I could get to AWARE the same day.

I finally reached Kaabong at about 8 pm. I was exhausted; my whole body ached from the terrible roads.

It was dark and my torch was buried deep in my bag, but I was immediately relieved when I heard my name being called as I got out of the taxi; it was Timothy, who works for AWARE. It felt more like a home coming that I expected. I left him and wandered off to find the compound in the dark. Much harder than it sounds as there is no outside lighting at AWARE; so while I was standing stupidly looking for the gate and trying hard not to step on human excrement (open defecation is still a problem even in the Town Council), I was greeted by Lydia who had come to look for me!

As I put my bag down in the same room I had shared with Stella, another member of the AWARE team - last time I was here - it dawned on me how glad I was to be back. Bit of a shocker considering how I had run away before.

As I arrived late (by Kaabong standards) on a Friday, I had a couple of days to relax and settle back into the slightly neo-colonial routine I had going on. Lydia, Stella, and Timothy go out of their way to make things easier for me - I have my food cooked for me, it is ridiculously hard to convince Lydia not to carry my basin of water to bathe in for me and then, when others that I've met before hear I am back, I have people who insist on buying me beer and soda in the evenings. I'm not sure what I found so hard before haha!

Local politician in traditional costumeThe day after I arrived in Kaabong happened to be International Women's Day, so I squeezed into a bus with two students from Soroti who had been doing internships in town to look after me, and we travelled for about an hour to a remote place called Kalapata which is just next to the Kenyan border.

The celebrations were held at a large open space, not that this was distinguishable from the rest of the large openness that seems to characterise Karamoja.

Celebrations here all seem to take much the same form so I was heavily reminded of the National Resistance Movement daybrouhaha that I attended last time I came to Kaabong.

There were lots of school children and groups singing and dancing with bits of drama about how to treat women well, in between and MPs and local councillors making a lot of speeches about how much work has been done and how far the region still has to go to guarantee women's rights.

Considering the state of women's rights in Karamoja at the moment, I dread to think what they were like before - if it has changed as much as the politicians implied. Women are still married off young so their families can receive their price in cows. Seriously, the obsession with cows is all-consuming here!

Gender-based violence is very much the norm and often fuelled by kwete, a lethal looking locally-brewed alcohol which I am told people prioritise over food. Here is a place where girls will be forced to take time off school, if they go at all, when they are menstruating because of lack of knowledge and facilities.

People often have no idea of how old they are, and for women it is usually calculated by estimating two years for every child they have and adding 14 (the age that many will be married and have their first). The list goes on, but this is meant to be an uplifting blog about my adventures so I'll leave it there.

Hopefully, though, things are changing and celebrations such as the one I went to, where songs, speeches, and performances are done both in English and Nakarimojong, are a place for people to learn or at least learn to think about things.

However, traditions and culture are so strong here that it definitely isn't going to change overnight, especially considering that times like these are some of the few occasions when there is contact with the outside world.

Where we were, there were no phone masts let alone electricity, so 99% of the time it is completely cut off. Sadly, I think often that many of the locals here are drawn to these celebration days by the fact that there is free soda and children definitely come for the empty bottles - I have no idea what they do with them, but every bottle seems to be worth its weight in gold to youngsters, but I suppose you never know who will take something else away.