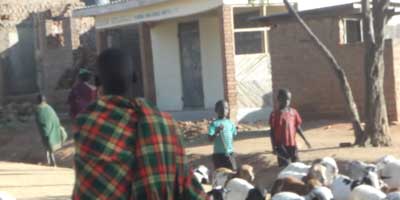 6th February 2014 - Now back in Kampala for a few days, Linnet Griffith-Jones writes about life in Kaabong, four weeks into her internship with AWARE Uganda, Safe World Field Partner in Karamoja, north-east Uganda.

I had to get used to pit latrines, lacklustre electricity, and being surrounded on a daily basis by crippling poverty.... The thing is, these weren't even the hardest bits.

In which I admit to being a wimp...

So the whole running off to rural Uganda to help save the world thing didn't quite go to plan. I'm not too proud to admit that within twenty four hours in Kaabong, I was crying down the phone to my parents having a complete meltdown; in fact I was pretty much ready to call it a day and book a flight back to the UK.

Luckily, I have brilliant parents who sympathised, but also reminded me that I have a job to do and that I needed to get on with it!

The Amazing People of AWARE Uganda

Members of the AWARE team at workAlso very luckily Grace Loumo [founder of AWARE Uganda] was outside, and so overheard me while I was having this freak out, and promptly gave me a hug, told me not to worry and that I could go back to Kampala with her once the week was over.  Of course me being me, I readily accepted her offer and promptly cheered up and laughed over the fuss I was making.

So as you've seen by my previous blogs, I did stay the week, and actually the longer I stayed the more used to it I got - partly because of the amazing people at AWARE Uganda who were so kind.

Respite in Kampala? - Colliding With a Boda Boda...

Traffic in KampalaNow that I am back in the capital city, I am itching to go back to Kaabong.

Also karma got me: thinking that I was safely back in civilisation, I proudly got across Kampala all by myself – getting taxis and crossing the road like I was an expert; until on my way home I walked in front of a boda-boda [motorbike-taxi] and got some stunning bruises on my leg and foot to go with the one to my ego.

Lessons of the day: things only go wrong when you think you are okay and pride comes before a fall!

Why I Crumbled in Kaabong

I think it's kind of important to mention exactly why I crumbled in Kaabong: not only to defend my actions, but to explain them a bit.

As I think I mentioned before, I had a comfortable life at home in the UK, living with my parents; it was great, but it isn't exactly the best reality to prepare you for the developing world.

The contrast in Kaabong is overwhelming: there is no running water, I had to get used to pit latrines, lacklustre electricity, and being surrounded on a daily basis by crippling poverty.

People are exceedingly grateful if you give them 500 Uganda shillings, which is about about 12 British pence!

Expectations - and How to Save the World?

The thing is, these weren't even the hardest bits. I think the hardest thing I found was the expectations.

Everyone was so so glad to see me and my white skin; someone told me that I was an answer to their prayers, another that they knew that I could make the lives of those in Karamoja better.

Even local government officials seemed to think that I could solve the problems that people had faced for decades!

Coming from a sheltered life where I've barely had a proper job and spent most of my time in education I had, and still have, very little idea of where to begin the massive task of empowering people (if anyone has any suggestions feel free to share them).

I am always trying to put a brave face on things, so it isn't easy to admit to not coping, but I hope no one thinks any less of me for saying out loud that I found it so hard to begin with.

I also hope that you won't give up on reading this (if anyone is), because after a bit of rest and relaxation and some planning, I will be back in Kaabong with more adventure stories to tell!