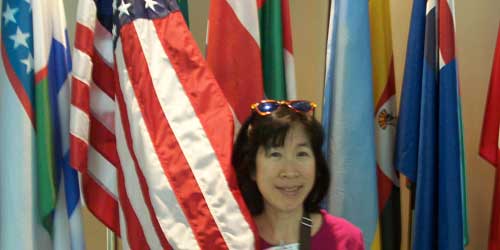 What is nasty to you?

A forgotten leftover meal that has transformed into an alien, fuzzy, green-tinged, and smelly science experiment in your fridge?

Your beloved dog rolling with unbridled joy and gusto in the unspeakably rank, decayed remains of another critter?

According to my old copy of Webster's Ninth New Collegiate Dictionary, the multiple definitions of nasty include:

You get the picture: NASTY!

It's easy to describe things and actions as nasty – stuff that might cause you to cover your eyes, pinch your nostrils tight, and hold your tummy in a sudden wave of nausea...or worse.

But how about when it comes to people? The above definitions of nasty are pretty strong words, especially when applied to human beings.

Recently, one presidential candidate called his rival a nasty woman during their 3rd and final debate. We, the public, have heard him describe one of his primary opponents as nasty earlier this year, and he's called a number of women fat pigs, dogs, and disgusting animals.

Politics is such a nasty business!

Really, if Mr. Donald J. Trump were to be our next president, what are American women to expect?

It seems he has a knack for dehumanizing women he doesn't like or who question him: fat pigs, dogs, disgusting animals. His die-hard supporters shrug off his “locker room banter” as just what boys do...so get over it!

Not a particularly high standard to hold for boys and men, is it?

He once declared on live radio that with regard to women: “You have to treat them like shit”. Is that going to be President Trump's gold standard in how America should (continue to) treat the female half of its population, a beacon to the world in its exceptionalism?

(but if they're “a young and beautiful piece of ass” and don't question you, everything's good!)

I don't see how this kind of mindset could make America great. Certainly not if lead by a leader of the most powerful and wealthy nation on earth. Let alone ANY leader, anywhere, be it local, national, or international; at home, at work, or at school.

How can you make a country great when you disparage others?

And your most ardent followers do the same, or worse: stay silent or shrug it off when an angry person's poisonous words have been spewed out against another person?

That is not exercising free speech.

That's being outright rude, selfish, and disrespectful to others who don't look like you or who don't share your same values. It's having no spine and no conscience. Or perhaps put more bluntly: it's being an asshole when you invalidate someone's existence based on shallow criteria in determining the worthiness your fellow human being.

Throw Out the Body Shaming - and Sexual Abuse

Sure, Mr. Trump may have helped break the glass ceiling for women in the construction business and hired many smart women based on their skills rather than their gender – at least according to a former employee of his, and given them a big break where other employers wouldn't. That's a good thing; I don't know that every employer does that now, but it would be ideal.

That doesn't excuse him, however, for his sense of entitlement over women, to just grab their body parts without their consent. That is violence.

But apparently not in the minds of some his most fervent supporters who think it's no big deal, and who might not even mind grabbing the pussy of a woman unknown to them. Even evangelical Christian leaders who support him are shrugging off his misogynistic comments.

Oh, pardon me...I wrote pussy. That is – at least until recently, considered an obscene name for female genitals.

Hey! Then it's time we women take back our anatomy and OWN it!

Because for far too long, slang terms for various intimate body parts have been used against us as insults – and also as insults against boys and men to indicate they're weak...”like a girl”. Our intimate body parts are referred to with dirty connotations and hushed tones of disgust by those who wish to shame us. Or who are offended by us.

Time to put all of the body shaming of women right where it belongs: into the proverbial sewer or nearest toxic waste dump! That's a hell of a lot of shaming garbage, after all these centuries.

What good reason is there to further tolerate the endless shaming of women, to look the other way in the same manner that Mr. Trump's supporters seem not to be the least bit offended – by his demeaning remarks about women – past, present, and likely, the future?

We ought to cheer Republican strategist Ana Navarro, who recently and loudly shouted “pussy” repeatedly on live TV to dig in at a Trump surrogate, pointing out that the surrogate was not offended by the candidate's use of the word yet horrified by Navarro saying it.

I'll be damned if I let anyone shame me for who I am or if I mention part of my anatomy. Don't shush me! I do not deserve it nor does any living, breathing woman or girl on this planet, now and in the future.

(nor did any woman in the past).

And I don't care whether it's Mr. Trump or a stranger on the street – there's no excuse for anyone to grab me anywhere without my consent.

Why is the concept of consent so difficult for others to understand?

And why is it alright with some people and seemingly not important (enough) or offensive when a public figure – particularly a presidential candidate, says horrible things about women, minorities, Muslims and others, repeatedly?

WHY is that okay with you, supporters of Mr. Trump?

Rising Up in Solidarity

Going back to the debate – while I don't agree with a lot of things former Secretary Hillary Clinton has done and said over the years, I don't think she deserves to be called nasty.

So I empathize with and applaud those women and men who've risen up to decry Mr. Trump's remark about his rival. Their speaking out to support the women he's dehumanized over the years and voice their disgust at his misogyny – as well as to come together for those who've endured the pain of sexual assault and sexism in all its forms, is a great and courageous show of solidarity!

When singer Janet Jackson got disgusted with the emotional abuse and sexual threats she'd undeservedly got from men, she stood up and backed them down; she sang out “Nasty”!

So I cannot ever vote for anyone – presidential candidate or not, who promotes and inspires those things, directly or indirectly, regardless of which party they belong to or whatever their gender.

Doing so would be dishonoring and disrespecting my elders who have endured the many injustices of racial animosity and discrimination throughout their lifetimes, my friends who've also experienced the same and tell me they continue to encounter random acts of racial hostility, my Muslim friends around the globe, and my friends who have disabilities or who have children with disabilities – as well as the children themselves.

It would be a slap in the face, if you will, not only to my family and friends, but to everyone who has ever been on the receiving end of racial animosity, sexual assault and sexism, Islamophobia, zenophobia, homophobia, disability discrimination, and... bullying.

And I'd be disrespecting myself! It would be a mockery of my life, of all the things I value, of working to help others less fortunate than me through Safe World for Women.

That would be very nasty.

Also read: Trumped Up - the USA, Migration and Myths