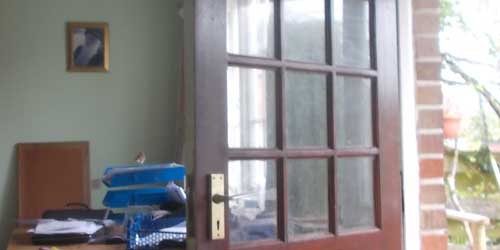 They say the robin brings messages from people who have passed beyond and is a symbol of rebirth. If so, I hope our robin is bringing messages of hope - from Andrew's dad who recently passed away, age 94. This robin comes into our cottage daily to inspect Dad's paperwork...

In the big picture, one person passing on at the grand age of 94 shouldn't be a surprise. Shouldn't shake our world.

Every death shakes us, wakes us up.

Having run Safe World for Women for the last eight years (initially launched as Women for a Change), I'm only too aware of the daily heartbreak and tragedies in the world.

And still one death can shake me profoundly.

One death on the 5th July this year. My father-in-law passed away, age 94.

For the last three months, I've barely been able to listen to the news and to hear about more people dying. Least of all to go on social media and help to further publicise news of tragedies. May be you could call it compassion fatigue...

It's taken me three months to realise that I'm now perhaps free to be able to focus on trying to improve the situation for those of us who are still here and, moreover, our children. 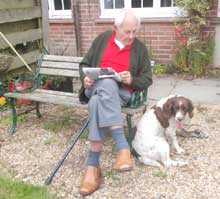 My father-in-law had vascular dementia and we (i.e. my husband Andrew and I) had been caring for him since we moved house to be near him, 8 and a half years ago, as soon as he was widowed.

In the summer of 2008, Andrew and I, together with a lovely friend Jane Young, set up Safe World for Women (then called Women for a Change), inspired by Andrew's mum.

In fact, the only reason we were able to consider setting up the organisation was because Andrew's mum left us a bequest - which was actually significantly smaller than she'd intended, due to the global financial collapse in that year. Nevertheless, we persisted - with the support of Andrew's dad.

Andrew and I have spent the last 8 years dividing our attention between family - and problems at the grassroots level throughout the world. Gobal challenges of course always helping to keep our own lives in perspective. In addition, Andrew's dad and my mum (who now has Alzheimer's Disease) have been hugely supportive of our work.

However, over the last year, Dad's memory was fading and his confusion was increasing. In addition, Dad's physical health declined more severely. To the extent that Andrew and I were 'on call' 24/7. Dad was liable to try to walk out of his house in the middle of the night and needed practical help with his physical functions.

Vascular dementia is not like Alzheimer's Disease. It does not follow a predictable pathway. It is an encompassing term for blockages or haeomorraghes in any part of the brain - in Dad's case blockages. (Whereas Alzheimers is apparently a build-up of plaque throughout the brain). When Andrew's mum was still alive, Dad told us he'd had a brain scan which showed dark areas in the anterior region of his brain, indicating he'd had a series of mild strokes, of which no-one had been aware.

Certainly, Dad's memory was affected and his memory further declined. But he was also very lucid and astute.

Perhaps that is why we didn't realise that death was close. We'd naively felt sure he'd live to be a hundred or so. He was very strong-willed - and, in fact, surprisingly fit despite the decline in his walking ability. He could still haul himself around his house with zimmer frame (walking aid) and hand rails - his arms were very strong (as an ex-sailor and rower) - he could even force open our rather warped front door when I struggled to do so.

Dad was so strong-willed that, earlier this year, his carer found him upstairs - having climbed under a barrier our friend had put there to stop him going upstairs and evidently safely ascended the stairs.
Hence we then put in a stair gate! (Though I have to add that of course he resented that too...).

All the time we were battling between restricting his liberty, thereby increasing his safety, and at the same time reducing his qualitiy of life and his feeling of freedom.
Dad couldn't understand why we objected to him walking outside in his pyjamas at night, in the middle of winter.

Remember, this is an old sailor who hadn't feared the oceans - Dad had continued sailing till age 80.
So he now had little fear of falling, which he did frequently! Hence, when he wasn't with us in our cottage, we were constantly watching him on the baby monitor as he wobbled determinedly around his cottage next door.

Of course, due either to pride or forgetfulness, he never pressed his care alarm - though it frequently went off accidentally in a false alarm.

The last few months of Dad's life, we were barely been able to focus on life outside our immediate vicinity.
Though we had a support network of wonderful carers for Dad, our lives revolved around him and we grew to cherish our moments in between our 'daddy-care'.

Dad's mind was still very active and, apart from his fading memory, he was very much here.

He was fit enough that we (and his carers) could take him out and about in the car.

I guess we were 'in denial' that Dad was dying.

Though, actually, no-one realised that Dad had decided to go. His strong will to live also meant that when he decided to go no-one could stop him - even the doctors were caught off-guard.

When Dad was in hospital, his last few weeks, we'd frequently asked if he might be dying and had been reassured.
Until his last day we were still looking for nursing homes for him for when he came out of hospital, as the medical professionals had advised.
Dad's death certificate says death from 'natural causes'. It seems they never identified any particular condition that led to his death. He basically gave up eating and drinking.

To us, Dad had seemed immortal. The sound of Dad's zimmer frame clopping around to our front door had felt eternal.
In addition, we'd had several scares over the last couple of years when we thought may be Dad had been about to leave us and then, a few days later, the clopping zimmer frame would be back and Dad would appear at our dining table.

And then suddenly on the 5th July, Andrew and I lost our focus, our friend, our daily routine.

It took a long time to sink in that Dad had left his body and, as I say, it's taken me three months to realise that I'm free to focus again - and even more fully - on the issues that others face around the world.

I think of the unfathonable changes Dad had seen in his life. Born in 1922, today's life must have seemed to him as science fiction. As founder of the professional engineer's union, he was able to grasp the idea of our network and was fascinated. Yet he could never really quite grasp that we could send 'letters' to our members, family and friends overseas which they could read immediately.

At the same time, I couldn't help thinking of the elderly woman I spoke to in the bush in Uganda who, when I asked her what changes she'd seen in her lifetime replied that she'd seen no changes - she was still gathering leaves to repair her leaking roof.

A few weeks ago, by synchronicity, I was honoured to be asked by one of our grassroots partners in Africa to write a foreword to an intensive and emotive book on conflict rape and survivors of gender-based violence in DR Congo, in which the courageous survivors themselves speak out in spite of stigma and discrimination.

This brought me back to reality with a bump - as did Dad's death.

To Dad's last day, doctor's did their best to assure us that Dad was going to live.
Then, on 5th July 2016, we had got a phonecall saying we better come straight down to see Dad, though they doubted we could get there in time.
Dad was by now in a lovely community hospital, overlooking the sea, yachts, and the 2012 Olympic water arena. However it was an hour and a half away from us and, yes, we arrived too late.

In the bigger picture, our lives are short and all-too-often insignificant.

At first, I was struck by a feeling that everything else we'd been trying to do was simply too overwhelming. Actually, I think that Andrew and I were probably totally exhausted! Physically and emotionally.
Bit by bit, inspiration and passion and energy started to return.

Inspiration and Motivation - Overseas and at Home

My motivation is that our parents' legacy lives on to help create a future for our children throughout the world.

My inspiration and enthusiasm has been re-ignited by our friends overseas, facing incredible challenges and doing amazing work - especially by Mugisho Theophile and Valerie Bahati of COFAPRI in DR Congo, Zoneziwhoh Mbondgulo-Wondieh of Women for a Change Cameroon and Evanson Njeru of Compassion CBO in the slums of Nairobi.

Towards the end of Dad's life - in May this year - Andrew and I had some rare time out and were honoured to meet with Helen Taylor Thompson OBE, age 91 - actually on our wedding anniversary and shortly before Dad's 94th birthday!

Our meeting is prominent in my memory and continues to inspire me.

At age 76, Helen founded Thare Machi Foundation (having already achieved so much). She reminds us that, in our fifth and sixth decades, our lives are really only just beginning!

Even closer to home, over the last month, a friend has been busy organising a local fundraising event - 'Making Memories Day' in aid of the Alzheimer's Society.

Inspirational - as well as relevant - because, single-handedly, she's been able to amass incredible local support.
By synchronicity, the CEO of the Alzheimer's Society, Jeremy Hughes, will be present at the start of the 'Memory Walk'.

I hope and pray that our lives, too, will stand for something, while we are here and still have the chance.