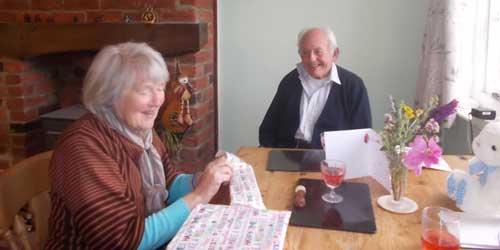 Mum happily celebrating her 79th birthday with my father-in-law, age 93, who has vascular dementia.

Mum lives with our son in her bungalow, half an hour away by car.

I went to collect her, as I do each week, so she could come here for the weekend.

Mum has recently been diagnosed with Alzheimer's Disease and I'm gradually getting used to her asking strange questions. Sort of. Actually it's still always quite a shock.

This time, Mum was concerned about where my dad was. (He passed away six and a half years ago).

She wasn't overly concerned. She thought he'd probably gone shopping in Croydon to buy her something for her birthday. (We live in south-west England but we used to live in the south-east near Croydon, where my dad worked, when I was a child).

I hadn't expected my mum to be very excited about her birthday, since she's lost sense of time and had been thinkiing it was Autumn. But I was pleased that she was very excited.

All the way home, she was telling me that she thought that Arthur (my dad) was planning a surprise for her along with Christine (me) and David (my brother). She felt sure that Arthur, Christine and David were out shopping. She said my dad had phoned her 'yesterday'.

Usually, till now, Mum's confusion has only lasted a relatively short while. But this time the whole journey Mum didn't seem to know who I was. I presume she thought I was her sister or cousin or someone. She seemed to feel I was someone she could confide in. Strangely, I didn't mind. She obviously liked me. And she was saying nice things about the other me... Though it did make it rather difficult to concentrate on driving. On the way home, I stopped to take her for a walk by the river, thinking that might ground her, but it didn't make any difference, though she enjoyed it. It's a river we've taken her to many times but she didn't remember it.

Mum continued asking me when we'd moved down here and she was surprised she didn't know, till now, that we'd moved near her. But she was very happy about it all. It was a difficult question to answer, as of course I wasn't sure who she thought I was. She also asked if my children were still living in the same place. So I just said yes, because I wasn't sure which children she was referring to.

Once back at our house, she thought it seemed vaguely familiar. She recognised my husband Andrew and his father (who lives next door to us here) as part of the family.

Gradually, over the next few hours, she realised that I was her daughter but that didn't come as any sudden revelation, for which I am glad. I wouldn't have wanted her to feel stupid or embarrassed of course.

Opening presents helped. We didn't get a lot of presents for her, as we thought it best to keep things simple. In this, we were right.

The first present she opened was a cuddly rabbit toy. She quickly became so fond of the rabbit that she almost didn't want to open her other presents and said, smiling, that there were 'too many'.

Then she opened her birthday cards, one from Andrew, me and the 'kids', one from Andrew's dad. and one from our son - which she'd wanted to save till she got to our house. She'd already opened some back at her house. Though when she had tried to proudly show them to me, she showed me some blank birthday cards from a charity presumably sent to her some time ago, for her to send to other peope. I found her birthday cards folded up in her bedroom and so I put them on her sitting-room shelf before we left.

Mum spent a very long time over the birthday cards, reading over and over again the wording on the back - such as the copyright. She was very happy. At this point, Andrew's dad appeared (he has vascular dementia) so Mum read the cards out to him - back, middle, and front.

The next present was a book of puzzles - crosswords etc, which she was delighted with.

The final present was rather large. Mum was convinced it was another box of chocolates and therefore she shouldn't open it before supper. I tried to persuade her it might not be edible and she eventuallly opened it. She was delightted (thankfully not disappointed!) to find it was a jigsaw puzzle.

We took Mum and Dad out to the local pub for traditional 'fish and chips'. Luckily the evening was warm and we were able to sit outside watching the sunset and birds.
If you've been following my blogs, you'll know that Andrew's dad is 93 and was hospitalised last weekend due to a fall. So that in itself is quite miraculous. Of course, neither my mum nor Andrew's dad had any notion that having fish and chips at the local pub was a blessing. (You might also know that Mum fell down our staircase in May and the paramedics came out two sequential nights).

Our son, age 20, lives with my mum as her carer. The idea is that he has a couple of days off, once a week. Last weekend, he ended up caring for my mum as we were at the hospital with Andrew's dad much of the weekend. So we felt it reasonable that he had three days off this weekend.

The trouble is that, after three days, Mum doesn't remember where she was before.

So Monday, after having spent the weekend with Mum and her jigsaw puzzle and new cuddly rabbit toy, she didn't at all remember that she lives somewhere else.

The last couple of days, Mum had been saying that our son is great at looking after her and asking when she was going back. But today, day three with us, she didn't remember she lived somwhere else. Much as we've been spending months trying to explain to her that it might be best if she lives here at some point, we're not quite ready yet. We don't actually have room yet - we're hoping to have a 'granny annex' built by Christmas.

I told Mum I would take her home today but she thought she was already at home. It's increasingly hard to know when to correct Mum and when to go along with her imaginary world. This time, I decided not to correct her. Hoping that when she arrived home at her bungalow, half an hour away by car, with our son there, she would remember.

So I just told her I was taking her out to visit her grandson, which was true. But not that he was staying in her bungalow to look after her and that she'd stay there with him for the next frew days.

However, actually Mum became very stressed indeed when she arrived home. At first, she was just excitedly packing things to bring back with her, still thinking I was taking her straight back again. So I took my time. I spent a couple of hours there, just encouraging Mum to eat and relax. She usually wants to go to bed rediculously early if anything - from 4 p.m. onwards. But at 8 p.m. she was still relucatant to go to sleep. I gave her a sandwhich in bed - fruit bread with chocolate spread, her favourite. Still she was saying it was early and she wanted to come back with me to her home. I gave put her teddy bears next to her as they always comfort her. But she said they weren't hers. Her cuddly toys were at her home (i.e her bedroom in our cottage). She thought she was in Surrey - south-east England, where we'd lived when I was a child, several hours away from me. I tried to convince her that I actually only lived half an hour away from her, which is true.

She desperately wanted to come home with me. She seemed like a child abandoned when I again tried to explain that she would be staying there for the night. Like I was leaving her in a place many miles from home.

Part of me felt heartbroken, like I'd betrayed her trust. She was visibly distressed that she couldn't come 'home' with me. And she'd had such a good time with us.

Part of me knew / hoped that the next day she'd forget she'd been with us.

The latter turned out to be the case. Tuesday afternoon, our son phoned to say everything was back to normal. Indeed, I spoke to Mum and she couldn't remember that she'd been at our house yesterday. She'd forgotten her birthday, the jigsaw puzzle, her other presents. All of which was actually a huge relief.

So in hindsight, leaving my mum at her house doesn't seem such a big deal at all. But all the way home, on Monday, it was tearing me to pieces emotionally.

The hardest thing I've done is telling my children that their baby brother wasn't going to live, back in 2004. This, to me, felt nearly as hard and cruel.