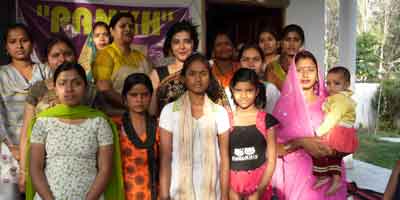 Pankh aims at being able to provide wings to women.

This needs to be done at ALL the levels that encompass a woman’s dignity and life: this is one of the core beliefs here at Pankh.

Reaching out to rural girls

With this aim in view we started charting our mission through a session held at a rural girls school here at Lucknow. This session aimed at making the girls aware about the socio-sexual aspects of their existence and the ramifications that arise in the complex social setup of India.

The gathering had about 1000+ girl students who found it difficult to manage undergarments when their menstruation began, and had no knowledge whatsoever of the legalities available to them in case they were harassed socially.

A survey conducted by Pankh revealed that roughly 50% of girls did not know WHAT sexual harassment was in the first place, let alone the thought of combating it.

The session targeted at enhancing their knowledge on reproductive health and better insights into personal hygiene.

Dr. Rakesh and her team of medical experts responded to questions and comments like:

Pank found out that intense emotional and psychological counseling was the need of the hour for these girls who hail from lower-middle strata of the society, some of whom were very poor.

It was only after a long, cosy, and grueling session with the girls that some of them did open up with Dr. Rakesh and admitted that some “particular” types of harassment were being faced by the girls on their way to school and back.

Not even safe at home

Not to say that they were safe even within the confines of their homes.

"Unwanted physical touch..which indicated that something was amiss"

This was the general problem faced by the young girls, and because they hailed from rural backgrounds – more often than not, they live in not-so-open spaces: the "brothers" and 'cousins" – and sometimes even the "uncles" don't hesitate to take advantage of such young girls to satiate their perverted lusts.

Besides, general harassments like the “uncle” who stands behind girls on the bus when they travel to school, and keeps touching them at all the unwanted places, boys and men who fondle the young girls' private parts and then run away in the crowd before they are identified, are only some cases that the girls talked about.

The lack of resources and courage to face up to issues was a recurring emotion that we felt was haunting the minds of these growing women at various levels.

It was here that Pankh reiterated the necessity of being able to find and develop individual voices in order to combat such social tendencies.

The interaction where these girls were told about the female reproductive system – its demands and its needs, was highly appreciated.

Pankh seriously felt the need to adopt this school…an idea very feasible and essential, too, but only with resources at our disposition; something that we don’t have at the present moment.

In yet another effort at generating awareness among the young girls about their sexuality and the role of media on the minds of young women, Dr. Rakesh held a session at Avadh Girls' Degree College, Vikramaditya marg, Lucknow, one of the most coveted institutions in the city.

This time the students being addressed hailed from a very different background and belonged to comparatively affluent sections of the society.

These young women, though aware about the role of media, were completely unaware about the way in which advertising and media images influence the self esteem, psychological, and social behavioural patterns of young women.

In most of the cases results in greater physiological and mental complexities than can ever be imagined. Dr. Rakesh counseled them about the need to develop an independent thinking capacity: a model where the family needs and the social values are kept in line with the individual needs for development.

Here, young women came out in the open with their insecurities and psychological fears, which encompassed:

The students' deepest heartfelt concerns came out in comments like this:

“I have deep interest in nail-painting, but my parents are forcing to take up a banking job…I am pi**** o**”

These were only some of the stories that Pankh gave an ear to, and the more Dr. Rakesh handled it, the more she felt the deep need for women like these to be helped at various levels.

The girls highly valued the session and their response convinced Pankh of such a need for confidence-building and moral guidance for these young women so as to help them avoid the rotten mores of social life which forces them to ultimately surrender their lives.

In Indian society, in the poorer and less educated families – though also in the upper classes to some extent, economic freedom is still being fought for by the women.

Men don't allow women to get out and earn, because of the "MAN OF THE FAMILY" syndrome, which is carried thorough and through like a disease.

The result is that women have to make do with whatever little they get, and also bear the frustration and battering of the family.

This can be attributed to the "FALSE sense of family honour" that forces men to think low of the women if they try to be independent.

Neetu Figg — a Hindu/Christian girl, came to Pankh about six months ago.

Pankh had just been launched then, and hers was the first case to take up – if at all we were ready to take up any.

She was a Hindu who had married a Christian, and now had nowhere to go because her husband had died and the family members had reservations about “accepting” her.

She did not have a job.

A class 12 school graduate, she had nobody to look up to when she came across Pankh through a neighbourhood woman. It was then that we took up her case and tried our level best to help her out.

She was hesitant about accepting a job here at Lucknow, because her relatives had been hounding her, coaxing her into sitting at home and not accepting a job—again the false ego issue! The false sense of family honour.

With Pankh’s help she tried to find her own footing, initially managing by doing odd sewing jobs and accepting some monetary help that Pankh could extend.

Neetu was offered a job at Barabanki, a few miles away from Lucknow, in the capacity of a peon at a small all girls’ institution.

She worked for five months there and has recently remarried and relocated to Mumbai— happy and well settled.

PANKH feels satisfied, and is trying to help other individual lives as well…we hope that we will be successful in our attempts.

Pankh in the Media