Providing Wings of Freedom & Independence for Women in India 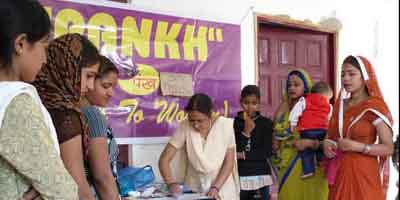 In celebration of the Centenary of International Women's Day, 2011

On the Road to Self-Sufficiency

Pankh has been working on and trying to achieve greater freedoms for some of the lesser privileged souls among our ilk, and it gives us great pleasure that March 8 became the destined date for us to tell you that Pankh has tried to provide wings of freedom and independence by providing a workshop to teach women artistic skills.

These artistic skills will help them to become self-sufficient. The women who attended are financially dependent on their husbands and in-laws, who often are not kind to them.

The women and girls hail from poor backgrounds—some do not have enough money to pay their school fees.

Because these women couldn't have paid the fee, Pankh taught them free of charge, and we had to pay the teacher out of our own pockets, which was a huge sum, and would have felt even better if we had some funds with us.

Even though donations pour in, and we try to weed out the problems of these rural women, the funds remained insufficient; the workshop could have been extended – which is what the women wanted, had we more money to cover the costs involved.

They were also told to mould clay into various easy artistic shapes and forms so as to create eye-catching designs for a prospective business venture, and insights were also given into the art of making small statues.

The women wished that the workshop could have gone on and on – and this perhaps was the best part of Pankh's and Safe World's success. We motivated them to involve themselves into profitable ventures; even though they were willing to and keen on learning the crafts, some of them felt hesitant to go out in to the market and sell their wares.

This we know because of the inborn fear in some women of money and the consequent power: there were women who were "not allowed", and for one of such girls we had to fight it out with the family members to help her attend the workshop.

The Spirit of Sorority

However, once these women came, they thoroughly enjoyed their experience. As we understand, that more than the act of learning, it is the spirit of sorority that gives us the courage to go on.

This workshop aimed at cultivating that spirit – we don't know how much, but we feel we have been successful to some extent.

We hope we shall continue to give them the much needed support and strengthen them in all the times to come – enabling them to lead lives with dignity.

The workshop came to an end with the Additional Director, Medical Health (state of UP), giving away certificates to the participants.

The event was covered by the national dailies and was also give a space by the All India Radio.

Together we pursue our passion: the dignity of women!!

Pankh in the Media