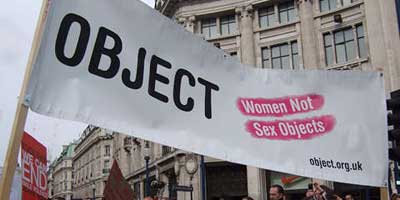 Campaigners gathered outside international news offices in East London. OBJECT is an advocacy organisation, based in London, which challenges the ‘sex object culture’. Photo credit: OBJECT

By Louise McCudden, for Safe World for Women

Objectification! We know it when we see it – usually – but somehow it’s kind of hard to quantify. In the Western world in particular, objectification takes such a hypersexualised form that it gets mistaken for sex, even for sexual liberation. But objectification is something very different.

It’s not a new thing. Just because the media facilitates it, and it has become so commercialised and powerful nowadays, doesn’t mean objectification hasn’t always been with us. Throughout history, politics, literature, art, even law and medicine, the inability to treat women as full human beings, instead of property, vessels, bodies which happen to belong to a person, or things to accumulate – objects, in other words – has been common and reoccurring.

Whatever form objectification takes, whether it is in placing a commercial value on a woman’s virginity, forcing her to cover her face if she doesn’t want to, banning her from covering her face if she does want to, or depicting women as decorative creatures to which you are entitled access if you earn or buy it, when it becomes normalised, we are taught it is natural. Challenging it then gets painted as unnatural: anti-sex, anti-freedom, anti-male, even anti-woman. It is this inability to distinguish between natural, healthy expressions of sexuality and desire, and objectification, that has become so disturbing in Western cultures as objectification takes a hyper-sexualised form, making it very difficult to, well, object to it.

So what exactly is objectification?

Objectification isn’t about sex, but it can be most dangerous when it manifests itself in a sexual way. Partly because it can normalise the idea that sex is something women’s bodies are used for by men, not something women actively participate in, facilitating and encouraging rape, but also because it makes it easy to shame women who dislike objection into silence by accusing us of hating sex or hating men or being frigid – ironically in exactly the same way women historically have been “slut-shamed” for enjoying sex.

Safe World for Women published a very helpful piece of writing several months ago, which explained to an advertiser why they did not wish to be associated with the “lads’ mag” FHM. Arguments about objectification are often dismissed as trivial so it’s very significant that people who work with a charity like SafeWorldForWomen, which volunteers alongside and helps women fight gendered violence all around the globe, including in war situations, and highly oppressive cultures, would still view something like FHM as being damaging.

It’s not just FHM. There was a recent photo in an Australian version of Zoo magazine which caused controversy by printing a photograph of a semi-naked woman chopped in half, asking readers to state whether they preferred to the top or the bottom.

The comments that followed were clearly indicative of a mindset that sees the female body as a thing to be used, and the person inside as a secondary consideration, if indeed a consideration at all. People may believe this is just banter to which there is an acceptable context but the mentality it encourages can be seen in all sorts of socially acceptable conversations and situations, including some that take place in workplace environments.  Many studies have been done by groups like the End Violence Against Women Coalition and Object to suggest there is a link between these publications and real life rapes, including this one where the sentiments expressed by lads’ mags and rapists were indistinguishable to many.

Objectification as a Tool to Humiliate

You can see how this happens. Men are told that it’s a “fail” if a woman exercises her autonomy and refuses consent. They are told that what they want a woman’s body to look like is more important than what she wants. And, as was the case a few years ago with this charming Maxim article, “How to Cure a Feminist”, that whatever opinions she thinks she has, you know better, and need to educate her out of them. As if she’s a child. Does that apply to her sexual desires as well?

If you don’t believe me that this leads to men in real life approaching female human beings as objects in real life, just have a glance through the comments on public forums like the Zoo Facebook page. One link to a (beautiful) retired glamour model showed comments mocking, and dismissing her, for having saggy breasts, as if her body is no longer any use because she’s not young. Endless pictures of posing models attract a myriad of nasty comments. Perhaps most telling is the reaction to a picture of a model posing topless with a game control: outrage. Comments appeared saying things like “You’re not a gamer if you just hold a fucking controller!! Jesus!” and “You actually need to play games and not just be a slut that can’t even hold the damn thing properly.” And, perhaps the best one: “Great chest, ditch the eyeliner and plastic ain’t edible, she’s ready to go. Probably a screamer.”

The Threat of the Thinking Women

Interestingly, the heaps of photos of women posing in a kitchen, or cleaning, or touching another model in utterly fake poses, do not provoke any demand for authenticity. For some reason, they don’t threaten or upset the readership quite as much as a photo that suggests maybe sexy women sometimes like to play computer games too.

We see this all the time with objectification masquerading as sexual liberation. The Sun prints photos of topless models, and claims to be celebrating their youth, beauty, and free choices. Yet it puts the words of the paper’s corporate owners in the models’ mouths. Far from these women being “empowered”, the whole joke is that everyone knows the “News in Briefs” quotes are not from them at all. People aren’t impressed by how empowered the models are; they are laughing at the very idea of them expressing an intelligent thought.

Why? Because these magazines are not promoting an image of a human being who loves sex. They are promoting an image of an object, and, worse, teaching men that being a human being and being sex are almost mutually exclusive. If she’s topless and posing, she couldn’t possibly enjoy computer games, or have a view on the Euro. Women are not really three-dimensional people; we are archetypes; sluts or virgins, intelligent or sexy. Sex, these consumers are being taught, is incompatible with respect or equality for women. No wonder these men are so scared of feminists they need to learn how to “cure” us!

I’d never call for these publications to be banned. Despite the best efforts of those who have a problem with any free discussion of objectification whatsoever, this is absolutely nothing to do with censorship, and nor is it about passing judgment on the women who pose. They can do what they like with their own bodies and I totally respect them. I know some people are so deeply locked into the narrative where women are the ones to be judged that they can’t read a criticism of sex work or glamour modeling without projecting that narrative on to the person making the criticism, but I’m not playing that game.

However, free choice comes with responsibility. Just as we may think actively about whether the food we consume is ethically sourced and healthy for us, and it doesn’t mean we hate food; just as we watch and read things that enrich our minds rather than literature that promotes hate, and it doesn’t mean we hate books, so we should not be intimated out of thinking critically about the sexual objectification of women around us every day, and how that impacts on our society.

'Sex positivism and slut-shaming in reverse' - the f word blog