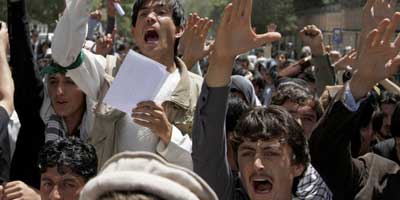 'Every Friday, religious clerics preach against “prostitute women who work in offices,” and last year the Ulema Council wrote a resolution advising women against traveling without a male chaperon...'

Last Wednesday [May 22nd] a group of students at Kabul University protested against the law for Elimination of Violence against Women, which was under consideration by the parliament, under the pretext that the law is un-Islamic.  Surprisingly, the protestors had few critiques of the law and they were baseless, for example one criticism was that the law allows prostitution, but slogans written and preached by protestors were interesting because they were against democracy and women. “Death to women, death to democracy,” yelled the protestors who held signs that read “democracy is prostitution, nakedness, immodesty, and un-Islamic.” The protest, highly political and nearly irrelevant to the EVAW, was significant because participants were carrying black flags not dissimilar to that of the Taliban, but also because of the governmental reaction to it.

As soon as the protestors gathered, the university door was closed to all students, which prevented thousands from attending class that day. More importantly, a group of female students exited their dormitories to speak in defense of the law and they were returned to their rooms with humiliation and disrespect. In an effort symbolic of the way women have been treated by the government in the past eleven years, the security officials told women something they have heard every day: “go back to your houses and let us run the country.” This message is repeated in the silent approval of the government of the the 25 per cent decrease of female employees in the government in the last three years, the fewer number of women in media, the poisoning of Afghan girls at students, and now, the silencing of female protestors who demanded protection by law. Time and time, women are told by extremists and governmental officials that they only belong in their homes and this country does not belong to them.

In addition to that, the protesting women were told that in contrast to the men who “were defending Islam,” they were defending “infidelity” and must therefore remain silent. This sense of ownership towards religion by men, whether from the security forces at the university who silenced female protestors, or from the male students who were protesting against women’s rights is not something new in Afghanistan. Every Friday, religious clerics preach against “prostitute women who work in offices,” and last year the Ulema Council wrote a resolution advising women against traveling without a male chaperon and the president himself approved of this resolution publicly and argued that “we (men) are all Muslims and support and follow our religious leaders (who are also men).” All these sources repeatedly remind women to stay away from religion and that religion is solely the property of men. Women are treated like children who must be warned against touching fire because it is assumed that they are not intelligent enough to interpret religion and be full Muslims and true believers.

Based on these two prevalent beliefs, one that women only belong to their houses, not to social and political struggles, and second that religion is the property of men to defend, as if Afghan women cannot be Muslim, the protesting women of Kabul University were pushed back into their dormitories and no one has spoken in their defense or apologized for how they were treated. A week has passed from the day when a few brave female students went outside among men who were yelling “death to women” and attempted to raise their voices in defense of Afghan women and the EVAW law, but were humiliated and hushed and yet, no one has spoken against how they were treated. To make it possible for Afghan women in every part of the country to speak up and be part of the force in changing and developing the nation, we must first address these two beliefs, which are at the root of much of the discrimination against women. We must learn to speak to our daughters and teach them that women do belong to the public sphere and were not made only to make babies, and that religion is not something that belongs only to men, but that women also have the right to engage in religious discourse.

A Farsi version of this Op-ed was first published on Rahe Madaniat newspaper.