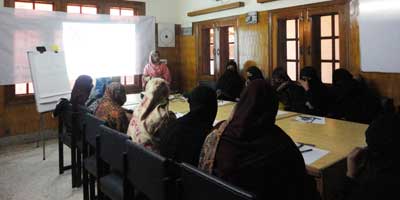 SAWERA one day training on conflict resolution with the women of Khyber Agency under Communities for Change project. May 2012.

This is the blog that Hina Gul was writing before the bomb exploded in SAWERA's office on 30th March.

Today's world is a world of conflict.

Everyone who is in conflict faces conflict from many aspects, like brutal civil wars, terrorism, peace, and war; it all increases day by day and affects everyone – but especially women and children, who are more affected.

Women face abduction, rape, and sexual and gender-based violence. On one side, women are facing many types of problems and on the other side, they playing a vital role in peace-building.

But women are away from the peace-building process. They are ignored as usual, in each routine.

Women's Role in Peace-Building Must Be Recognised

Women have always made a unique contribution in the peace-building process. In all areas, whether it's peace-building or any other thing, women’s role cannot be ignored and their contribution brings development –  not only for themselves, but as well as for the entire world.

Women can bring different issues in front of the world and can make better decisions to solve these issues. They can better understand the issues and can follow the rules to solving the problems and issues.

They can ensure that the voices will be heard of those people who can express their views – but who have no opportunity to say anything.

They hear all those people who have a voice and they make sure that they can make a better future and can create sustainability.

Women Play a Unique and Valuable Part in Peace-Building

Women are also mobilizing the entire community for development and peace-building. They are encouraging their societies and communities to bring change through peace-making.

The women in leadership roles are realising their importance in peace-building, internationally.

Women can play a different and vital role in peace-building as they can understand and compromise in difficulties and try to find out the best solution in miserable conditions from many aspects. Like the impact of armed conflict, natural and man-made disasters affect men and women both –  and especially women and children; both are vastly marginalized in the community.

Women and children have been targeted and are easily attacked in each matter, and have no right to raise their voices and explore their feelings and views.

Women Face Dangers, Wherever They Are

Women are unsafe whether they are in IDP (internally displaced persons) camps, doing jobs, working in offices, in school, or in college. They face rape, abuse, sexual exploitation, and are at risk of their physical security everywhere.

Women are taking their responsibilities with full patience and can fight their burden with patience.

They also playing a very unique role during various miserable situations with their families and communities, and for peace-building. For peace-building and long sustainable development not within community, but in the entire world, women should be involved in the peace-building process as their role cannot be ignored.

The country's civilization and culture comes from a woman's creation.

Women are known for their patience and understanding.

Women are powerful as they can understand and tackle every matter very easily with full understanding.

Women are serving their roles in every aspect in the whole world – and fulfilling their responsibilities very well.

Bomb Blast at Office of Women-Led NGO in Peshawar, Pakistan

Safe World Statement on the Bombing of SAWERA's Office