"We live with the dead": Between the cemeteries and the elite of Cairo 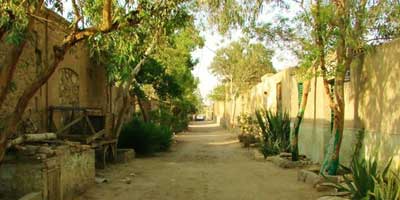 The quiet alleys of Cairo's City of the Dead are the only home for about half a million Egyptians. Photo credit: Alshimaa Helmy.

"We live with the dead, is there any worse than that?", Hamza asked as he smiled.

Hamza has lived in Turab El-Ghafeer, the cemetery by Salah Salem, also known as the City of the Dead for about fifty years. He is only one of more than half a million people that have lived their lives, from birth until death, isolated in Egypt's cemeteries. These cemeteries are centuries old, with, built with tomb like rooms for each family to bury several members. The community that resides there has been there for generations; too poor to afford rent for even the cheapest apartments in Cairo. Those that leave can only stay away for a few months until they find themselves again in a loophole, back in the cemetery and unable to afford their apartments.

The struggles to get by in this so called City of the Dead are plenty; each individual has their own difficulties. 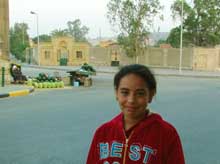 14 year old Nada is an inhabitant of the city of the dead, she's born and raised in the cemetery. Photo credit: Alshimaa Helmy.Nada, for example, is a fourteen year old girl that lives with her family, which consists of eleven people, in one of the small rooms by the tombs. She spends her days happily serving her family. She makes tea for her grandmother who sits for hours putting together nails that will later be used for curtains, she takes care of her younger siblings, and she cleans. Nada wishes she could go to school, but the fifty pounds for enrollment is too costly.

Nada's uncle, Hamdy Bassiouny is thirty-six years old and unemployed. He used to have a painting and carpentry job until his hand got injured by a birdshot while he was protesting. At the time he only had ten pounds in his pocket, and he needed thirty-five pounds for an initial treatment. He now only has work when someone needs to be buried.

Amal is another young girl who, unlike Nada, has gone to school and is the only one of her close family members who has made it to university.  She is currently studying Mass Communications in Arabic at Cairo University, but she has not made it this far without any obstacles. Her brother has to go pick her up when she finishes university in the afternoon, because walking alone between the cemeteries after dark is not exactly the safest thing. Even something as seemingly simple as admitting to her friends that she lives in the cemetery is tough for Amal.

Mona, is a middle aged, mentally disabled woman whose story is a bit more shocking than the rest; illustrating the worst about Egypt. She has two children, a baby and a three year old boy who the others call Taha talawth because he is so dirty. The Turab community has a split attitude towards her; there are those cook for her and take care of her as much as they can, and there are those who take her money and use her home as a storage room. Mona has had nine children from nine different men that have "taken advantage of her"; some of her children have died and some of them she has given away. The state does not acknowledge her, nor her children's' existence (because they do not have birth certificates or governmental papers).  Taha's life will prove quite difficult if he grows up with no formal identity.

If one were to sit and recount all the stories and traumas seen and heard in just a few visits to the "City of the Dead", this article would never end.

Now keep those brief stories in mind and remember yourself on this lovely morning. You walked into one of the most expensive institutions in the entire country, hidden far away in of the most elite neighborhoods in Cairo. Everything around you is good to look at, and nearby are similar gated communities; Rehab, Qattameya Hieghts, etc. The American University in Cairo (AUC) is one of the most "prestigious" universities in the region, because for some reason anything that has a foreign name (especially Western) is more "prestigious."

There are several gates that you must walk past, showing your Identification card as you pass through each one and the walls surrounding us are wide, tall and long. As you walked in, maybe through the "Pepsi gate", you had to use your ID and go through a security machine, assuring AUC's "safe environment." No one really knows who they are keeping us "safe" from though. Remember Mona next time you walk past these gigantic walls.

The Inside of this institution is an entirely different story, it is almost as if you are no longer in Egypt. Most of the students are wearing the same things; showing off different brands of shoes, bags, shirts, etc. Occasionally there will be music in the plaza, and huge banners advertising the singers and bands that will come entertain the students. How many students are actually here to learn? Girls like Amal didn't make it into Cairo University with their parent's money.

As you walk through the huge, magnificent buildings, you are met with a variety of different food outlets; Cilantro, Cinnabon, the Caf, Subway, Auntie Annes, TBS, and many more that almost no one in Turab ElGhafeer has ever even heard of. Hundreds of computers are instantly at your service, while Amal has to drag her mother along with her to internet cafes to finish assignments. At AUC, the water is plenty while in Turab ElGhafeer several households have to make a few trips outside to get a few buckets of water. Huge amounts of electricity keep the campus glowing and beautiful well into the night, while in the Turab you're lucky if your family has one weak light bulb working in their room.

Again, if I were to go on, this article would never end. This is apartheid; made to appear natural. This is two completely isolated communities, living in the same country, completely unaware of each others' existence. The difference between them is the difference between the earth and the sky and, ironically, I do not know which one can more accurately be called the "City of the Dead."

Jihad Abaza is a student in the American University in Cairo, Egypt, a freelance writer, and the co-manager of the Unheard Egypt media initiative. She is based in Cairo, Egypt.