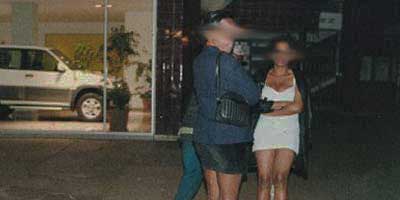 She was young, only 15, and the world looked beautiful behind rose tinted glasses. Her classmate was the apple of her eye – a boy so charming that he could make her weak in the knees in a moment. She had everything charted out for herself. She would study, she would be a doctor, she would have this wonderful boy as her husband.

Or so she hoped.

Unbeknownst to her, this young girl was betrothed without her knowing. Her parents promised her to a wealthy, old Alhaji.

When she learned of what her fate could be, she had no choice.

Or so she thought.

She ran away with her older friend, a new friend she had befriended just some months back, with a promise on her lips that she would help her in trouble. She went with this friend to Lagos, where she was introduced to her “brother”, who gave her a place to stay. First, the "brother" was nice to her and gave her wonderful things, providing for her life and sheltering her, feeding her and watering her. This went on for a while.

Till one day, he explained to her that she had to start earning money to take care of herself.

She agreed. He had been kind enough, but now it was important for her to be independent. But what work could she do, she wondered.

Before she knew it, he introduced her to an old rich man that lived on Victoria Island. He made her sleep with him, but when she refused, things became nasty. Her friend and her brother were rough with her. She was forced into it.

Every night she would sit in front of the house with other girls. Rich men from Ikoyi, and Victoria Island, Apapa and sometimes from lands far and wide set abroad would come over to check them out and then pay the "brother", and take one of them away for the night.

In one cruel stroke of fate, her life was torn. Her life had broken into shards. She cannot go back home. She has no future, she has no way out. Was it worth running away? Would she have been better off if she had married the old Alhaji?