From Reverence to Humiliation - Women in Language 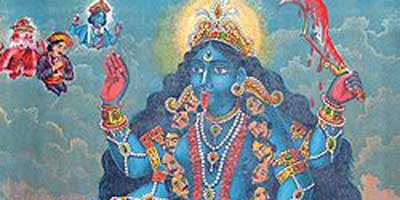 Kali - The Hindu goddess associated with empowerment. Kāla primarily means "time" but also means "black" in honour of being the first creation before light itself. Image: Wikipedia.

Dr. Sheba Rakesh, feminist activist and Executive Director of Pankh, a women's empowerment organization operating in India, and Safe World Field Partner, writes about the expression of language, human relations, and feminism, exploring the areas of communication and sexual interchange.

Its an oft accepted fact that language provides a screen or a filter to reality. It determines how speakers perceive and organise the world around them. Consequently, the language we use defines our experience.

The expression of this experience is radical, because in a world of heterosexual experiences, 'intercourse' is not just a sexual interchange, but according to Webster's dictionary, it is 'communication', 'communion' and 'exchange of thoughts and feelings'.

However, ironically enough, in a 'normal' world the array of feelings gets washed away when the arena of the body dominates.

I am reminded of American artist and art critic Maureen Mullarkey's 1987 lash-out to feminist Andrea Dworkin's work 'Intercourse', published, the same year.. In this work, Dworkin stated and wanted her readers to consider how heterosexual coitus functioned as a delimiting political practice that clearly works to enhance female objectification and destroy female freedom.

Mullarkey averred that Dworkin sounded like a 'Cunt'---and that meant, she sounded pretty stupid and dumb (That was very very interesting to me).

From a woman like professor Jane Caputi, this invited the classic retort in the form of her essay "Cuntspeak: Words from the heart of Darkness". In this essay, she pillages cultural sources as well as modern definitions to establish that sexual degradation of women through derogatory language is just a part of the 'normal' pornographic thinking in society, where the body is split from the mind and the genitals are rendered "dumb and stupid".

However, for Caputi, 'Cuntspeak is variously a literary, mythic, poetic, comedic, ritual, and prophetic tradition of truth telling', where she closes the brilliant essay with these lines from Eve Ensler's TheVagina Monologues (1998, pp88-89):

"What's special about your vagina?"

"Somewhere deep inside I know it has a really, really smart brain".

Keeping Women “In Their Place”

Now, it is an fact, that men use such terms more easily because in strictly stratified societies (or should I say, even otherwise!?) they are conditioned to believe that women are inferior to them – that they are the Omnipotent Phallus, which denotes power and that they must keep women 'in their place' so that they come up as the more assertive of the two sexes.

The socialisation process, then, for both men and women, is not related to only gender - related activities and attitudes, but gender-related linguistic behaviour. Interestingly –  noting the patterns of speech in single sex peer groups, gives them up as more likely to be sex-specific. One obvious, result of this acculturation is the fact that women's speech has often been devalued by men.

From Robin Lakoff, Dale Spender, and Deborah Tannen, to Luce Irigaray, theorists have asserted the rights of women to reclaim their language through their bodies.

Cuntspeak then, distinctly becomes this process of linguistic intelligence, that challenges the 'normal' patterns of sexual superiority/inferiority in man-woman relationships to establish a warmer and more 'human' environment instead.

Right from the stark nudity of Kali [Hindu goddess], embodying the dangerous form of all raw power to the snaky haired Gorgon, Medusa, to the female oracles in ancient Greece, who were known as 'Belly Talkers", it is the at-large generative capacity of the female genital darkness that has been revered. Changes in thought processes and social behaviour have resulted in pornography and conventional morality to view the body as being lower than the rationality associated with men – and the phallus – so that the woman does not remain a heart, a brain, and an individual – she converts into 'bitch', 'whore' 'pussy' and of course, 'cunt'.

For Aristotle, women remained an 'impotent male'. To Jean-Paul Sartre, she is an 'obscene hole' – conceptually admitting – she is Nowhere!

Talking about this, some flinch, some of course still celebrate the degradation, but only a few change the mirror fitted into the moulds of social behaviour that takes up the understanding of sexuality as a continuum and recognition of sexual correspondence, and not differences between sexes per se.

Linguistic objectification is nothing else but a way of humiliation and degradation at large---clearly proving that as a social whole we have failed to evolve out of the ancient stultified matrices of thought, no matter what our claim to be modern might remain.

Not only does this linguistic objectification of women make them 'juicier' for men, it has serious important implications: when linguistic shame castes a morbid shadow on women's health and overall well-being.

Essentially remaining an 'outside' language' in a world that is meant for 'good women' – who would not want to subvert the proprieties of 'normal' social order, it helps to aid alienation and sexual silencing, where any kind of voice becomes 'guttural', 'dirty', and 'base', thereby complicating issues related to bodily autonomy and control---from sex to motherhood.

The message is pretty much clear: If you cannot name it, you cannot claim it!

Men's Involvement is Essential to the Feminist Movement

I am reminded of George Bernard Shaw's play, Pygmalion. Professor Higgins goes about transforming Eliza Dolittle by teaching her to talk like a lady. Colonel Pickering treats her like a Lady. Eliza observes that her success is attributable to Pikering's approach rather than that of Higgins!

That indeed teaches us something valuable about language and behaviour. Time and again, I have emphasised that feminism is not just a woman-related movement.

It is an issue that involves dignity of women as individuals from where it is most needed: men.

They do have a significant part to play---even if the game has only just begun!