Ten Things I LOVE about Kabul 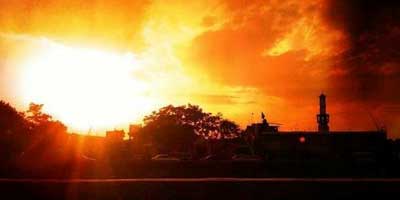 Ten Things I LOVE about Kabul

Anxiety about security, especially among the educated youth and women, increases in Afghanistan as 2014 approaches. This anxiety became more apparent to me when I was preparing to return to my college in the United States of America, and many of my friends and relatives urged me not to return to Afghanistan. Each time I faced the suggestion, I would respond with one or two positive things about Afghanistan that gave me enough reason to come back and work for my country.

Here are some of my reasons for loving Kabul and wanting to go back.

Standing on a rooftop and watching the Kabul sky shining with stars and the hillsides shining with light from the thousands of houses located on their outskirts during the summer is one of the most peaceful activities in the world. Driving through 80m street of Taimani at night was another highlight of my time at home.

The street has solar lights on both sides. The chilly wind, the occasional cars, the bright moon, the sounds of little shops closing down for the day all fill one with the deepest appreciation for life.

Baaghe Shaahi is a symbol of women’s empowerment and progress.

Baaghe Shaahi, is a garden and restaurant owned by a woman, located passed Qargha Lake. All the cooks are women. The space is for families-only to avoid men from harassing women.

Upon entering the garden, especially in the evenings, you will see many families sitting in circles, talking, eating or playing cards and their children playing in the pool. Young couples immersed in love usually sit under flowering trees. There is a cute little pool for children right by the entrance. Apple, apricot, and pear trees, red, pink, and white rose bushes, orchards, and a lot of greenery cover the garden giving it a fresh smell. The service is very friendly and the owner of the restaurant, a middle-aged woman with a great smile, visits tables to greet guests.

Sitting on a bench in the yard right before sunset reading poet Mawlana [Mawlana Jalal-ud-Din Balkhi-Rumi] or Frogh Farokhzaad [influential female Iranian poet], drinking hot green tea and listening to the local radios play music from around the world is spiritual healing at its best. No matter how hard or terrible the day has been, as the red light of sunset shines mercifully through the tall proud hills of Kabul to finish off the day, the whole city is filled with the hope for a tomorrow better than today.

Kabul traffic. Photo: National Geographic.I know many people who hate the traffic in Kabul and that is understandable. After all, one can spend anywhere between 15 minutes to three hours stuck in traffic. But, I remember the Kabul my family returned to in 2001 every time there was traffic. The city was deserted.

There were so few women –  and even fewer women out of the Burqa.

Seeing so many people rush to work or towards shopping centers, gives me hope that we, Afghans, will not give up on our country. When stuck in traffic, I look around to find female drivers, I count the number of women on the streets,

I watch for the smile of children who are selling books or magazines and I feel so grateful that my city has life!

When I returned to school this year several people commented on how healthy I looked after spending time at home.

I owe it to the fruit stands of Kabul. The nice shopkeepers bargain endearingly and market their fruit as the best in the city. Most of the fruits are produced in Afghanistan.

They are fresh and tasteful, unlike the fruit in USA that taste mostly like plastic and paper.

Kabul police. Photo: Getty imagesSeeing them standing on the streets filled me with pride this summer.

I noticed that they are much friendlier to women, much more respectful and professional, and dressed and equipped better than previous years. Every time I passed them I would salute them and smile –  and they would smile back.

That nice kid who washes cars in Shahr-e-Naw.

This summer I met one of the nicest kids ever. He would usually be wearing a baseball cap, clean clothes, positive energy and a genuine laughter. He smiled every time he saw me driving towards him. He would run up to me with immense energy and ask, “Khala [auntie], should I wash your car?”

The waiter at Baba Amir Kababi.

Baba Amir Kababi, a traditional Kabab restaurant, is on the main Shar-e-Naw Street and it was the first Kababi I went to after years in Kabul. I was greeted by a very pleasant middle-aged man in a dark-red uniform. Usually, families and women are asked to sit in a separate part of the restaurant, but every time I came in to the restaurant, he would seat me at the general area without even asking me to be taken to the “special segregated room.”

His open-mindedness would make my day every time I visited.

Every once in a while, I would see a couple holding hands in a shopping center, sitting under a tree in Baaghe Babur, a historical garden, drinking chai at a restaurant or walking around in Shahr–e-Naw.

Traditionally, love is considered a crime and showing affection is uncommon among Afghan families.

Seeing these public acts of love made me hopeful that some men now see their wives or fiancés as equals or as companions and that is progress.

Youth are Standing Up

Photo by HadiaI met many articulate, progressive, and smart youth this summer and attended many of their events. From Hadia, a group of afghan volunteers working for social reform cleaning the city and distributing Iftaari  – the meal that is eaten everyday to break fast during Ramadan, to police men and women, to a group of youth gathering to advocate against the Taliban and brutal crimes against civilians or distribute food to refugees, and the emergence of a youth book-club, are examples of youth organizing.

Youth leading protests or painting graffiti on the walls of Balkh Province to me all are signs of change –  and reasons to have hope and believe in Afghanistan.