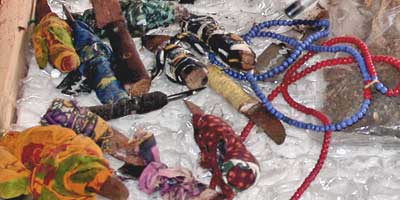 Elsie Ijorogu-Reed recalls her own experience of FGM, by writing about a fictional character, Edrin.

Just as Edirin entered her grandmother’s house, her excitement grew, happiness abounding in her heart as it swelled with joy. The capricious abandon of her young age and the marvellous treat that a child’s grandparents bring to her were enough to suffuse little Edirin with the resplendence of joy.

One evening during these holidays, Edirin’s grandmother asked her to go with her to a party. Just perfect, thought Edirin, I can wear my Jeans! As Edirin dressed up and went out, she saw the frown that creased her grandmother’s face. She doesn’t like it, thought Edirin, but that’s okay, what does Grammy know about Jeans?

When Edirin went to the house where her grandmother said the party was, it surprised her. There were dirty stools, and a few people sat on them. What party is this, Grammy, Edirin asked her grandmother. Everyone suddenly stared at little Edirin, but no one answered her. Just as Edirin decided she would speak to the reedy little girl sitting beside her, a blood curdling scream shook her, covering her with a sheet of ice. This is no party, Edirin thought. Every nerve in her body told her to run, to escape and to get away from there. She ran to the door, but huge men appeared out of nowhere and stopped her.

Cornered in a world where she didn’t know anything comforting, Edirin began to cry. Why am I here? What is going on? Why is Grammy keeping me here? Edirin looked at Grammy, hoping to catch her eye. But Grammy didn’t look at her. Edirin cried out through her sobs- promising she would be a good girl, saying that she was afraid, pleading that she wanted to go back home. But no one heard her.

A sallow woman came out of a room and looked at Edirin. You’re next, she said. Suddenly, Edirin was taken into the room. People forced her out of her clothes. She struggled, fought back, refused to let them take her clothes off. But what is a twelve year old girl against a group of grown-ups? Edirin was forced to the ground. She felt shamed and humiliated. One man held her legs, as another man sat on her chest holding her right hand, as another man held out her left hand. Edirin suddenly saw a flash of metal and noticed a knife. Before she knew it, a sudden sharp pain began down below. The knife pried her, cutting her, leaving her raw and wounded. Edirin felt raw pain as she bled. It was eventually over, but Edirin was broken, scarred for life. She wasn’t given a thing for the pain, nor a thing to clean her wound up.

She mustered the strength in her last sinew and walked out. The sight of her jeans with all the blood stains on it sickened her. Her grandmother smiled at her, but Edirin felt the burn of the wound that she had inflicted. Congratulations, Edirin, You are now a Woman, glowed her grandmother. Edirin went home to a grand jubilation. She was fed the best fish made by her grandmother. But the bitter taste of pain and betrayal remained in her mouth all the time.

Years later, Edirin carried the pain with her, still smarting under the emotional wounds she was delivered that day. For years, she couldn’t help but feel violated and betrayed. Her grandmother deceived her, and failed to protect her. Edirin never forgot the humiliation she felt as the men looked on while she was subjected to the ordeal. When Edirin goes to a gynaecologist, she wears a cloak of embarrassment, explaining why she looks different. The day she went through her sordid ordeal, they took something from Edirin, leaving her with a gaping void.