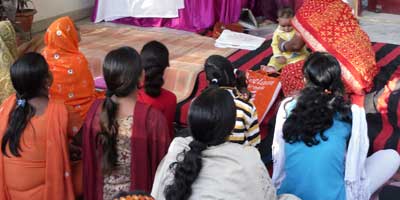 "In a day and age when the screams of liberation resound in the skies, and innumerable Indian women just like their counterparts all over the world are choosing to live single and independent lives, sexuality still appears to haunt and capture the heart of social sickness."

At Pankh, constant efforts have been made so that women from all walks of life are given an insight into choices, sexuality --  their ramifications, as well as the right approach to deal with such issues.

Sexuality for women --  the issues of the body are closely related to the issues of personal existence, and ironically, young women in India are still not well-equipped to handle these issues.

This is so  because of the Indian social structure in which talking about sex may be considered “modern”, but handling related concerns and issues are taboo questions that are preferably shoved under the carpet.

Pankh, has been trying -- and will continue to try its level best to generate an awareness on such issues and extend help wherever essential.

'I Scream, I Am Hetero, and Normal'

This article by Sheba Rakesh was first published by Pravda.ru - 18th Feb 2012

A Wake-up Call to Reality

American poet, essayist, and feminist Adrienne Rich’s concept of the “Lesbian Continuum", took the notion of feminine sorority and bonding a lot further.

The term for Rich meant talking about the commonality of “woman-identified experience, not simply the fact that a woman has had --  or consciously desired, genital sexual experience with another woman.” This of course had far-ringing ideas in the realm of feminism, which normally, as an ideological construct seeks to demolish the patriarchal constructs in society.

In that sense, what Rich was propounding brought the women much closer beyond,  of course the clinical definitions of lesbianism that were doing the rounds till now.

However, what comes as a shocker -- or more appropriately, a wake-up call to reality, is the visible chasm that exists between academic feminism, and the social realities and the bonding between women that cannot be called supernaturally sweet.

I write so, because this article is born from the dark womb of such social experiences whose searing truth scatters the myth of being born liberated and “sororitised”.

Sample a few cases below (the names  have been changed):

Now, both these instances are only a small indication of how the lives of women are still circumscribed by what I would like to term “social sexuality”---or let us even say, the age-old concept of “compulsory heterosexuality” (once again, given by Rich).

The former, however feels better placed, because one knows that as a woman, one must be clear and ready with one’s sexual stance --  or be prepared to be classified as an “abnormal” woman.

What irks [me] is not the physical threat that women do often face in the society, but the psychological and internal threats that make it nearly impossible for lives to bloom in fullness as far as women are concerned.

Whereas the working women feel better positioned to handle, confront or ignore such issues or threats, the worst-placed are those vulnerable women who are not equally immune to such onslaughts --  and that is exactly from where social problems get a green go ahead!

In a day and age when the screams of liberation resound in the skies, and innumerable Indian women just like their counterparts all over the world are choosing to live single and independent lives, sexuality still appears to haunt and capture the heart of social sickness.

French feminists have already argued much in the field.

If Monique Wittig (French author and feminist theorist) feels that lesbianism is the correct answer to patriarchy and spells women’s sorority, Helene Cixous (French feminist writer, philospher) has gone a step further to elaborate how women must step into the “Realm of the Gift” ,and learn to give for celebration of theirselves without worrying for the ‘wrong’ or ‘right’ kind of barter with men---and then ultimately, for all of these women , sexuality gets trapped in the ‘right’ kind of linguistic action that connotes freedom from bondages.

'Normal' is More than Being Sexual

However, for women like Singh and Kapoor, who are still unknown to the academic aspects of feminist ideology, life does not become any easier because they have experienced the shattering of the dreamy concept of sorority first hand.

For women who justify patriarchy on the grounds of heterosexuality it is time they realised that being “normal” should ideally mean something more than just being sexual. It is time that they realise that rather than they being “frigid” women like Singh and Kapoor, are in control of their passions, instead of the case being vice-versa.

Is not THIS that seperates humans from beasts and leads to the ultimate goal of human life...provided we know and consider that goal as spiritual elevation of the self?

And it is also time they realised that an unsolicited participation in the personal lives of other people, so as to create psychological imbalances and encourage diffidence is not going to amount to any virtue at all.

Indeed, it might well be classed as a sin.

It is time that they learn that more than exercising a control over the others, it is how to exercise control over one‘s own self.

Give Voice to Differences Amongst Women

Things spell trouble when even for those who belong to the academia; learning remains confined to books and academic discussions, and we miserably fail to adopt the wisdom and use it in our lives to benefit others.

And the arising ramifications of complex thinking processes form a vicious circle that engulfs the future of relationships.

Feminism probably must initiate another line of thinking: that it should be not only to destroy the ideas related to male supremacy and fight the oppression of women at all fronts, but also to understand that differences amongst women need to be given a voice...and that this has not to be only on the planes of Third World and First World Feminism, but issues that transcend boundaries -- issues that concern you and me and our day-to-day lives, issues that connect and concern hearts.