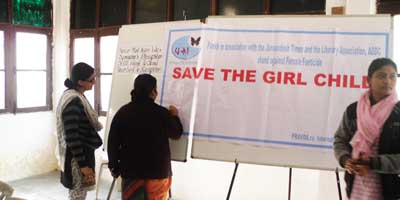 Pankh, a women rights organisation based in India, did a commendable job once again to uphold its stance of opposing all forms of Violence against women. This time it was in the form of a signature campaign, that was held at the Avadh Girls' Degree College, an Institution of higher education at Lucknow.

It was here that the girls were sensitised to the importance of womanhood and the need for controlling the growing menace of  female foeticide that is creating lot of trouble in a country like India which is otherwise known for its veneration towards the Female forms of divinity. Dr. Sheba Rakesh, the Executive Director of Pankh stressed the need to awaken the masses towards such heinous atrocities which have large scale social ramifications in the form of human trafficking, prostitution, dowry and domestic violence and other forms of harassment, both emotional and sexual against womenfolk. 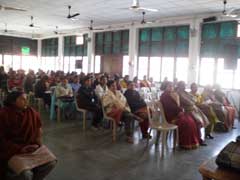 The students as well as the faculty members participated in the signature campaign and felt that there was a dire need for such awareness in the society. This, moreso, because although the legal system offers so many ways out to curb this crime (One of them being the Pre Conception and the Pre Natal Diagonistic Techniques Act, 1994) but the implementation of those laws requires a  huge social participation.

This participation cannot be guaranteed unless there was more of this awareness generation on a huge scale and Pankh, which has been consistent in its efforts to speak up against all sorts of violence against women, was once again lauded for its efforts. The students turned up in huge numbers, expressed their views in poetry and prose on the occasion of this campaign and exhorted people to think of women as an important part of their lives and attach due value to them.

The demographic statistics show us that scale has been tilting quite unfavourably as far as the women populace in the country is concerned. Sex selection and the killing of the girl child has reached genocidal proportions and the medical practitioners perpetuating these crimes still go scotfree.

With the figures oscillating between 927 to 933 females for every 1000 males in the country may not be a great encouragement on the development front, the flipside is that such figures lead to even more evil practices like polyandry, which make life hell for women. The deep rooted traditional prejudices that attach a greater importance to the birth of a male child in the family has not spared even the upper class urbane and apparently sophisticated sections of the society who prefer taking up foetal sex determination in order to guarantee the birth of "only" a male child.

This in turn is fuelled by orthodox religious beliefs that say that only a son can be the vehicle for the parents' ultimate salvation. While this is Not the complete picture, it does indicate that as a society, the scale of development needs to move higher up if India has indeed to achieve a healthy future.

This as Dr. Rakesh believes can be achieved through empowering women socio-economically, so that they become empowered to exercise informed choices through their own decisions. " ...A for apple and B for Boy does not make us educated...it just makes us literate...education lies in being able to make informed choices.... and Cultural 'yeses' can be life damaging if women do not have the power to mould cultures", Dr. Rakesh said. The signature campaign was organised on January 31, 2012 and was a huge success. " ...We hope to continue this campaign in future to rally popular opinion against these evil practices", she said.

The event was held in association with the literary association of AGDC, that is Avadh Girls' Degree College.