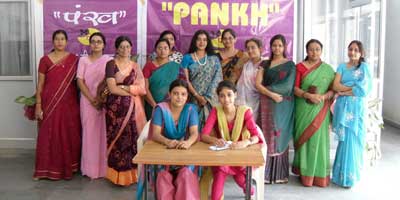 Pankh - working to support and empower women and girls in India

Love. Youth. Marriage. Burning, suicide, death. Welcome to India's dowry killings. Yes, still in the twenty-first century Indian girls can be, and are, set on fire or forced to suicide because the husband or his family consider that the dowry she brings with her into marriage is not large enough.

How important is the dowry in  India in social and economic terms? And how come brides can be killed because of it?

A: In the Indian social set up, dowry or 'dahej' holds a rather important place. Simply stated it refers to the goods, wealth(moveable and immoveable) that a girl takes with her to the groom's household when she gets married.

The entire idea originated in the fact that earlier, women did not enjoy any inheritance rights in the paternal property. It was the male heir that stood to gain in the event of the parents' transferral of property/ death or any other such event. Since the rights were not equal the Indian culture (as well as that of other civilisations in the world) made it mandatory that the girl get a  part of the father's legacy through what she carried with her at the time of marriage.

Gradually it came to signify the "Love" that parents had for their daughter and eventually the system succumbed to the growing greed in a consumerist society where instead of the emotional bonding between the families involved in the marital alliance, what came to matter is the amount of wealth  she could bring with her. Since, these business negotiations like everything else have a shelf life, the exhaustion of dowry rings the trouble bell for the woman in question.

Sometimes, the problems can assume uncontrollable proportions, where the opposite party is not satisfied with the dowry that the girl has brought with her, it makes sure that the new member of the family is not accepted. The most miserable of all these situations is the collusion of the husband where because of the lack of personal interest or adhering to false notions of honour and ego, the relationship is not given the due importance and the  woman continues to pay the price in terms of her poor existence and sometimes even her life.

You see, this is an extremely complex issue....and the human psychology and brains are at work....insecurities can wreck havoc with human relationships...we have cases where the brides have been driven to suicide or have been brutally killed. Apart from the fact that the groom and his family are to be blatantly blamed, it also has to do with the rigid social mentality where a woman's life is considered to be a waste in case the marriage fails to work. The social stigmas, the failure to respect individual identities and more importantly, the women's failure to appreciate their self-worth are reasons as to why lives come to desperate ends. Pseudo notions of honour, sexuality and the neat "dos and donts" wreck havoc...society wins..lives lose...
In a nutshell the entire issue is about a radical shift in priorities-Money over love and emotional well-being!

Do the groom's families have to contribute anything to the dowry?

A: No, nothing in material terms...just huge amounts of greedJ

How is it possible that such a barbaric practice is carried out?

A: As I said earlier, there isn't any fixed set of rules to perpetuate tortures. In most cases the brides are burnt alive, in yet some of the others the emotional, financial and psychological torture is so intense that the girl, finding herself emotionally alone is driven to despair and ultimately suicide. Apart from the social and psychological behaviour of close ones that encourages such behaviour it is the legal problems that force women to see nothing but a dead end...and this despite the fact that the law has quite some options to help the women in dire times. Also, with the increase in greed these crimes and associated criminal mindsets and activities (considering the girl child a burden and female foeticide) are increasing by the hour.

In some places in India, the bride is injected with poison so that she dies a silent death and the relatives escape scot free in the absence of sufficient evidence. In some cases Silence is the biggest killer. Also, as long as the social mentality associates the existence of a woman as that of a commodity the exploitation will continue. Sometimes, it is the parents themselves who pride themselves at being able to conduct these negotiations aptly, failing to understand that it is a big folly to assume that the girl will be "happy" if sent across to live taking huge money with her....when they should realise what is the big deal in buying a man for their daughter when like everything else, commodities do not last long....and that she can be better off without such selfish relationships in her life....

Could you explain what sort of legal loopholes facilitate this horrific behaviour? What other factors are involved in creating a scenario whereby dowry killings can take place?

A: The legal loopholes are not as many in terms of provision as they are on the level of implementation. Although, here I would like to state that in terms of the provisions also where there is the Anti-Dowry Act of the Indian Penal Code (section 498 A), Dowry Prohibition Act, 1961( Sections 3, 4,4A) and Section 304 B of the IPC regarding dowry deaths, there are within these sections some good areas which provide a lot of breathing space to the accused party.

Besides, not very many such victimised parties have the courage and the resources to pursue their cases persistently. Odd as it may sound, sometimes a lot has to be faced before the crime can finally be registered. Oftentimes, it is the legal system that comes to the rescue and helps the victim fight the corruption of the system before actually the case becomes a legal reality. In case of interstate crimes and breaches of marital trust, the parties may end up losing too much time because of the factors influencing the dispensing of justice. Oftentimes, this becomes a tussle of power between the parties involved rather than being straightforward cases demanding justice...and this precisely can be one of the factors that encourages such crimes to be perpetuated time and again.

One of the 'other' major factors that help in creating a scenario for facilitating these horrific killings is the continual silence that tends to creep into relationships when crime is just about knocking at your doorstep. Pankh had been following this case sub judice at the court of law where the dead victim's parents have been fighting a case under section 304 B of the IPC; where they still refuse to come out in the open and comment about whatever went wrong with their daughter for fears that are absolutely individual in nature. It is to be noted that the victim had called her father before the gruesome incident and asked him to take her back, something which he failed to do and the sorry incident happened; personally I would not blame this party, because they have a younger daughter to be married off and they are blatantly scared that the "talk" would ruin her prospects of her marriage, so much for the desire for justice in the current social situations - despite the crime being non-bailable and cognisable under law the accused has been granted bail against an appeal in the higher court....and then there are debates in the country on the misuse of the dowry laws - these examples and incidents only tend to make the situation more serious.

How widespread is dowry killing?

A: Throughout the world these negotiations exist in some form or the other, yet according to a UN report it is just South Asia where dowry leads to deaths. Dowry being a business negotiation, woven around an emotional alliance....the breach of trust is assuming alarming proportions with every passing day...Dowry is safely touted as the biggest killer of women in India...and this within a relationship that is supposed to guarantee her social security and protection! Where such killings are not huge, dowry still remains a huge motivating factor for other crimes such as female foeticide, human trafficking, prostitution and most of all, loss of human dignity. The social cost of allowing such systems to exist is huge.

Could we conclude that if dowry killings are rife in India and that brides are driven to suicide or are murdered often with impunity, then women's rights per se do not exist in India?

A: This question again has a not so simple explanation to it. As I said, rights do exist but the implementation is at fault. The eradication of any social evil requires an active inbuilt participation from within the society, something that is still not forthcoming from the average Indian household. Thinking about women's rights and the way they are handled at personal, social, organisational and administrative levels needs even today to undergo a drastic change before something worthwhile can be achieved. I do believe that sorority cannot always spell magic if vested interests continue to rule the roost at the organisational level. This stands true to Women's issues also...however the times are transitional and women are gradually learning to face these issues but we still have miles to go....
....Women are raped and turned out in the name of marriage..or bonds are severed after years of marriage with the woman without any financial resources unto herself....yes Timothy, we have miles to go....

The Indian Government passed the Dowry Prohibition Act fifty years ago in 1961, which made the demands for dowries in wedding arrangements illegal. However, half a century on, there are reports that there are still thousands of such incidents every year. Is that figure realistic?

A: Unfortunately yes! As I said we are still waiting for the generation of true awareness in the masses. Like everything this needs a huge effort on our part.... we need women to appreciate the value of independence as much they appreciate the value of relationships in life and most importantly we need more men to be aware of this delicate issue....again a huge effort.