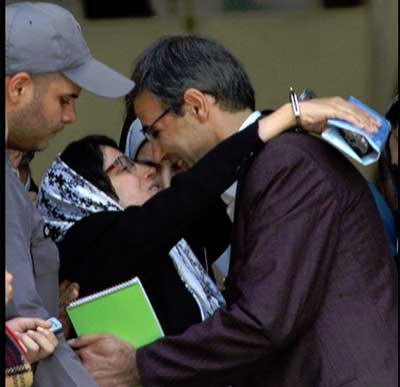 In an emotional reunion, jailed Iranian human-rights lawyer Nasrin Sotoudeh met her husband Reza for a brief moment when she attended a court hearing to examine whether to revoke her license to practice law.

On January 11th 2011, Nasrin was sentenced to 11 years in prison and has been on hunger-strike for some of the time

According to the women's rights website Feminist School, on Sunday morning, Nasrin Sotoudeh was taken from Evin prison to the Iranian Bar Association where a group of lawyers including Ms. Keyhani, a member of the association’s board of directors, was to examine her case.

The school’s website has also reported that Nsrin was seen handcuffed and accompanied by a female police officer as well as two soldiers.

“She appeared in the court with a smiling face while looking very confident, something that reassured those present [including] the women’s rights activists who had come to see Nasrin Sotoudeh at the Iranian Bar Association.”

At the same time pictures were released of a brief reunion between Nasrin and her husband Reza Khandan.

In a new letter to her husband Nasrin has vowed to continue to seek justice regardless of the court's decision.

Much has been said about the loneliness associated with prison. I want to share prison life with you, for it somehow takes you off guard.

Can you imagine the environment that the new generation has created in prison?

The same surprising environment that currently exists outside prison is also pervasive within these prison walls, creating a new form of existence both within our society and behind bars.

This existence is at times happy and upbeat, at times calm and demure, at times watchful and analytical, but always tolerant and willing to compromise; a tolerance that will eventually lead us to achieve our goals.

You know better than anyone that much like running water that over time creates fissures in rocks, it is our tolerance and flexibility that will be eventually remove the obstacles from our paths.

My dear Reza, everyone ponders about their freedom while in prison.

Although my freedom is also important to me, it is not more important than the justice that has been ignored and denied.

Like many other prisoners, I too dream of going on a trip with my family, or to walk freely under the rain, to gaze upon the trees in the alley, or to spend the afternoon with my kids in a park.

Do you remember by the way, the joy with which the three of us greeted you every afternoon when you came home from work?  We were a happy family and despite the threats by my interrogator during that first interrogation session when he threatened to obliterate me and my husband from the face of this earth, we remain happy; for my interrogator did not realize that happiness lies within an individuals heart.

It goes without saying that I would like to have all these things and that they are all important to me, but nothing is more important than those hundreds of years of sentences that were rendered to my clients and other freedom seeking individuals, accused of crimes they had not committed. Though I had the privilege of representing only a few, I will continue to object to their unjust sentences regardless of whether or not I have a license to practice the law.

They are holding a trial in order to revoke my license to practice the law; a license that I always tried to use with honor. Even if my license is taken from me by a government some day, they cannot strip me of my honor; and that is all I need.

My beloved Reza, as long as such unjust sentences exist and the Revolutionary Court continues to render such shocking rulings, with or our without a license to practice the law, I will continue to object these sentences, for one does not need a license in order to object to unjust sentences.  Tell them they can revoke my license if they wish to do so, but they can't strip me of my right to justice.