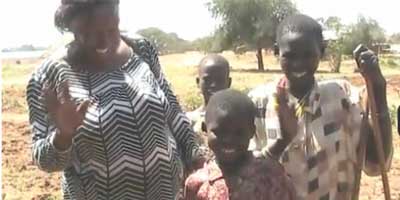 In the summer of 2009, I took a field trip to Kaabong, on the border of Sudan.

I travelled the day-long, arduous journey across Uganda with Grace Loumo, arriving at midnight.

For me, Kaabong was a life-changing experience. The harsh conditions there were beyond anything I could have imagined. After 2 days I was totally exhausted, physically and emotionally.

Kaabong, and the journey to and from Kampala, have been Grace's life for the last 25 years, since she married and moved to her husband's home town.

When Grace first moved to Kaabong, from a lusher part of Uganda, she was horrified by what she saw.

She was greeted by abject poverty, degradation, abuse and a sense of hopelessness. Instead of turning her back, Grace has dedicated her life to the women and children there. To empowering them to help themselves, to develop self-esteem and self-worth. To know their rights.

She brought the women together and founded AWARE Uganda, a grass roots organisation and now a Safe World Field Partner.

And slowly, slowly, the cultural values have been changing.

Ingrained cultural values meant that women and girls were valued only as commodities.

Along with the cows, they were fought over, stolen, bought and owned. Marriage usually took place after a girl was raped - girls were 'raped into marriage'.

People who were born with 'disabilities' were considered to have very little value and were often destroyed at birth.

Girls with disabilities are valued least of all. If they survive, then they are outcasts. Or they were, until Grace arrived.

With 25 years of Grace's sensitive approach, ingrained cultural attitudes are starting to change.

In the office, I was greeted by the efficient, bright and charming young receptionist.

He was totally dedicated to Grace and to his work. He was born with a severe disability and very limited mobility. He was working in the office because Grace had given him the opportunity of employment. He was only alive because, many years ago, Grace had managed to persuade his mother to go against the wishes of the tribe and keep her baby.

His mother is very proud of him.

Tereza Has a Home

Nearby the office, members of AWARE Uganda were building a home, in one of the more secure parts of Kaabong.

A woman and her children were watching, eagerly. I was introduced to them. The mother was Tereza.

Forty years ago, Tereza was born with a 'club foot'. Despised for years, she had been abused by men and left with 4

children to care for.

Homeless, she had wandered the streets with her children. Now she stood radiant, with Grace's arm round her and her shy, smiling children gathered around, watching as the men and women of AWARE Uganda carefully constructed her first home.

Tereza is lucky. Attitudes are changing. But there is still a long way to go.

Poverty is rife. Drought is the norm. Polygamy and HIV are part of life. Food supply depends on monthly trips to collect dried rations from the World Food Programme. Fresh food is a scarcity. The water and milk taste salty.

Grace is trying to help the women act as peace-makers between warring tribes, but fighting continues. A neighbouring tribesman had been shot by the school fence the day before we arrived.

No Security for Women with Disabilities

One of the many reasons why AWARE was founded was because of violence against women, which is much worse for women with disabilities.

These women face violence in their daily lives. A woman without disabilities living in Karamoja is overworked and not recognized for her roles: she is a breadwinner, builds shelter for the whole family, raises her children, walks many miles looking for water, food and firewood, and looks after the sick and the elderly.

For a woman with disabilities – beginning from day one of her birth, her family thinks she is a curse or a bad omen; no man wants to marry her because cannot do a lot of house work.

She is always forced into sex, where she is impregnated or infected with HIV/AIDS – and left to die.  Sometimes she becomes destitute, with her children becoming beggars before they can walk.

At the  AWARE center, we have constructed a grass thatched house for one such lady, Achila Tereza, aged 40, with four children. Achila was impregnated by different men, and she was on the street with her children in Kaabong district.

Since the region, Karamoja, is a semi arid place where there is a lot of famine, those with disabilities face food insecurity. The World Food Program (WFP) has been supplying food since time immemorial in Karamoja, where the women face

problems by strong, young men grabbing food from them.

At times, warriors break into their shelter, rape them, and loot the food items.

The challenges that women with disabilities face in our community are many.

They cannot access medical treatment as health centers are located in far remote areas. There are no income-generating activities, and these women have difficulties in movement (no wheel chairs), living in an unsecured environment.

They face food insecurity, and are infected with HIV/AIDS. Being destitute, society denies them basic necessities.

What is needed to help the women: