Miracle Survivor of the Pakistan Floods Tells Her Story 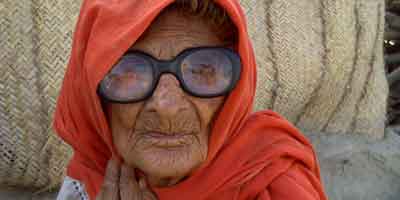 Miracle Survivor of the Pakistan Floods

On 7th August 2010, the devastating Pakistan flood came to several districts in Sindh, especially the District Kashmore. Tori bund’s breach has a long lasting effect in upper Sindh, where the scale and intensity of the devastation is well-known.

Miraculously, Musmat Salma - reputed to be about 105 years old - survived alone, for eight days and nights, in flood water near her house in Sindh, which was five kilometers from  the water's breach to her boundary wall at Tori Bund.

Musmat Salma tells the story in her own words:

“On 8th August, 2010, I was standing in my house; suddenly, I heard an unusual noisy sound, then rapidly –  I saw water coming, which vastly came and swept me into a half kilometer.

Then after half kilometer, I became  attached to a date palm tree, so after all the  water flowed in around my body, later – during half the night, the water level gradually came under two feet.

Then the water crossed in a natural flow,  but maintained a steady speed.

In the early morning, I became very hungry and drank flood water and ate some leaves of a tree. Naturally, my body got weak and I went to a second tree – which was thicker, as well as attached with other trees, where I remained.

So, eight days of  long hunger weakened my body. Then suddenly, my grandson came with a boat to my ruined house to search and take some things.

I cried out, and he quickly brought his boat for me and took me to a doctor, where many people came daily to see me, and  wondered to hear my story”.

Salma is the wife of Manglo. She is aged about 105 years. She has two daughters, both in their 60s. Of her three sons, only one (Bahar Khan) is still living - he is also in his 60s.

She currently resides with her son-in-law Mr. Baz Mohammad.

SDTS (Sewa Development Trust Sindh) provided financial and technical support to Salma, and now she has her own room for residence and feels proud among family members.

The SDTS team asked Salma, “What you think of the support provided to you by SDTS?“

“I am thankful to the NGO who rebuilt my home.  It could have never been built without your support, because I am unable to reconstruct my house; nobody in the family gives priority” .