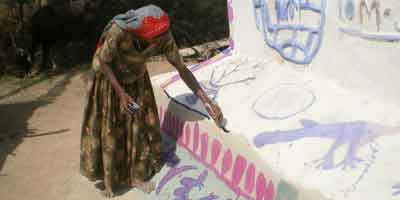 A woman adds the finishing touches to her shelter. Photo: SDTS 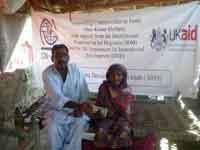 The project uses local designs and mobilizes communities’ capacity for self-help to meet the unprecedented need for shelter solutions. The design for a one-room shelter using local material and techniques, and built for the most vulnerable groups – such as female-headed households, minorities, disabled, the elderly, low income households and the family with large number of family members – have been given priority.

Photo: SDTSHouseholds engaged in repair and restoration activities through cash-for-work initiatives that will assist them to meet their post-return basic survival needs. Additionally, a grant mechanism for restoration of assets for small businesses will be administered to revitalize these key sectors of the economic and social environment.

SDTS has made possible in every way to follow Disaster Risk Reduction (DRR) recommendations to beneficiaries, initially, and now finally they completed all their plinth [architectural base], wall, and roof-level work according to plans.

Related Article: The Forgotten Plight of Pakistan’s Women - The Aftermath of the Floods

During devastation of 2011 monsoon rain, union council Dilawar Hussain was severely affected – the houses were destroyed and families were displaced for the months.  After that, there was nothing for them to live in.

SDTS and IOM started to work on shelters and provided them support to rebuild their houses, and also provided them necessary input like toolkis, plastic sheets for roofing, and solar lamps for night time. 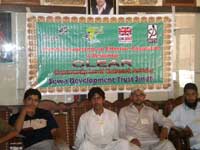 Photo: SDTSClimate Leadership for Effective Adaptation and Resilience (CLEAR) is a five-year initiative of LEAD Paksitan focusing on climate change impacts on the lives of poor people and farmers in southern Sindh and Punjab. The project aims to empower and equip local stakeholders to streamline their local climate adaptation practices and develop district-based local adaptation plans of actions (LAPAs).

SDTS conducted a one-day orientation session with community stakeholders to sensitize them about climate change and its impacts in the country, and how they can contribute to face climate change challenges. 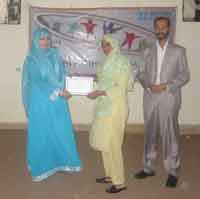 Under the Active Citizens training programme, three trainings have been conducted with young people this year; each training covers four days.*

Sewa Development Trust Sindh is implementing the Active Citizens Programme with the support of the British Council Pakistan in the three districts of Sindh province. The Active Citizens program aims to develop leadership skills in young people of Khairpur, Mirpurkhas, and Larkana districts.

It facilitates community and political participation amongst young people through interaction with local community, organizations, and local and national governments. It also develops an understanding of global issues which affect young people and their communities.

The program aims to increase Active Citizens' outreach through developing strengthened partnerships with civil society organizations in the country, and engage with communities and young people in the Khairpur, Sukkur, and Larkana districts.

Photo: SDTSSDTS organised a community event in Khairpur to award and recognize Social Action Projects being undertaken by young Active Citizens. After successful completion of ACP training, the Active Citizens are encouraged to do social action projects (SAPs) in their communities to address the local issues on a self-help basis.

During the year 2011, a total  of 30 SAPs were conducted by active citizens, to exhibit their SAPs; a community event was organized in Bilawal Bhutto Park Khairpur to showcase their SAPs and award certificates of recognition.

Following are the details of trainings and number of participants participated: