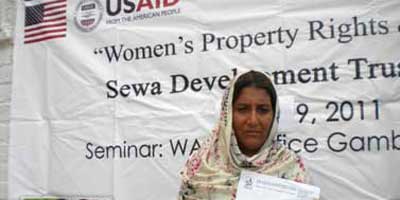 One year after devastating floods wreaked havoc on Pakistan, another one struck in August, leaving tens of thousands affected, homes damaged and more than 80% of crops destroyed.

Sewa Development Trust Sindh (SDTS), with financial support from the Aurat Foundation (a women's organization in Pakistan), and USAID under the Gender Equity Program (GEP), has begun implementing our Women's Land Rights project in five districts of northern Sindh province.

Women at risk of being exploited over land ownership documents 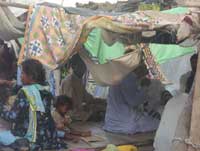 The women, especially female-headed households, are the vulnerable groups; they face violence and gender discriminations at all levels.

It is important to inform these groups about their rights and get necessary support from the government agencies, as per priority.

In some cases, whole settlements are flattened by the flood, leaving no sign for defining the household plots and farming areas. Marking of the land for a particular owner/farmer has vanished due to flooding.

It is feared that most of the people lost their land/property documents, and it may be an opportunity for corrupt persons to exploit female-headed households through manipulation when they will approach them for land/property ownership documents.

Training on women's rights and gender-based violenceIn view of the above, it seems necessary to build the capacity of the local grassroots organizations and local communities to cope with these issues.

The proposal is to provide necessary support to female-headed households and women owners of the land for their land titles, and networking with government line departments for their support.

To create an environment for women-headed households, land owners, and women at risk, so they can enjoy equal rights through mobilization, information and participation and activism of civil society organizations.

The targets groups are:

The target number of beneficiaries are: