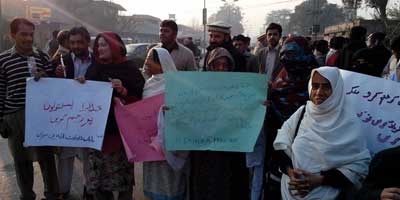 Press conference and rally at the Press Club Mardan KPK [Khyber Pakhtunkhwa], organised by SAWERA and other Civil Society organisations.

Black day, written on the blood of innocents... I always believe in love, justice, faith, as we all are common human beings.

Where should I start and what to say? I really do not have words as I have lost all words and expressions.

This is the saddest moment of my life - that today I am going to pen this blog. I could not sleep even for a while, since last night, as all the scenes of crying and screaming of children, mothers, families and relatives are in my mind.

I read Facebook and Twitter, full of the messages against the terrorism and the black incident, and could not bear it anymore. We all are fed up from all this terror. Who could bear, and who would believe such an atrocity could happen, as the incident that happened in Pakistan on the 16th December 2014?

It is really difficult for me to say something - but where has the justice gone? Where is the comfort and peace? Why does all this happen?

The Army Public School Peshawar, Pakistan, has been targeted by the militants who killed children one by one. The day started with the usual routine, but who knew that the day would become stained with the blood of the innocent? Parents did not know that their children who were going happily off to school would never come back.

I really do not know the reasons why all this is going on. Why does all this happen in my country? What are the militants’ demands? But I just wish that at least they should not attack schools and innocent children.

Different sources say different statements. But I just know the fact that today 141 children are not among us. They left us in this cruel world and closed their eyes forever. There are a lot of questions that come to each individual’s mind.

How can a human being be so cruel like this? How can innocents be killed? What is their fault? Who is responsible for all this?

I wish I could grab all them in my arms and could give them some peace.

Today we are lost. Humanity is finished, and the limits have been crossed. Terrorists are terrorists regardless of their religion, caste and tribe. Terrorists have no religion.

I really do give a big salute to all those children, who unwittingly gave such a sacrifice for their nation, and also a big salute to their parents, families and relatives, as they all show such great strength and courage. In this critical situation they never step back.

I would like to call for a National Black Day in Pakistan, on the 16th December each year, so that the lives of these children are never forgotten and such an incident is never repeated. 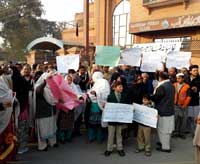 Society for Appraisal & Women Empowerment in Rural Areas (SAWERA), along with other Civil Society organisations, organised a press conference and rally at the Press Club Mardan KPK [Khyber Pakhtunkhwa], on the 17th December 2014.

In a briefing to the media, the killing of innocent school children and teachers of Army Public School was strongly condemned. Furthermore, the government was asked to provide protection and to develop a clear mechanism and policy to protect women and children from brutal Killings.

The participants also showed solidarity and condolence with the parents and families of the martyred and injured ones.

Afterwards, members of civil society and other participants joined together in a walk through the streets holding banners, and a candle vigil was held at Mardan to show solidarity and mourn the loss of the innocents killed.