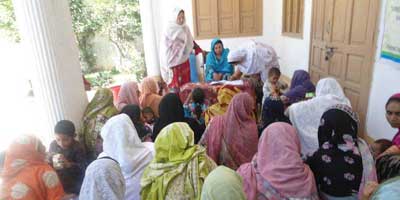 Some of the beneficiaries of SAWERA

TQK is a new established forum of like-minded individuals and organisations wanting to improve the situation of tribal women, children. and communities in FATA (Federally Administered Tribal Areas).

“TQK” (pronounced as Tuck) is a Pashto word having multiple meanings. It means the pillar that holds roof. It can also mean a stitch, taunt, and decision depending upon the situation. Takrah Qabayli Khwende (TQK) is an initiative to provide a forum for all those interested in changing the situation of tribal women, children, and communities.

However, the driving and inspirational force behind TQK would be the tribal women and men themselves.

Therefore, at least 50% membership of TQK should be represented by the tribal people. especially women –  with leadership roles. TQK will create spaces for them to come together, to discuss issues, evolve strategies, raise voices, and influence government policies, laws, and resources to become more equal and just. TQK will make efforts to expedite the developmental and political decision making processes in FATA (Federally Adminstered Tribal Areas) to reduce its deprivation and to bring it to par with other areas in Pakistan.

The stakeholders of TQK would include individuals such as the tribal professionals both women and men such as doctors, teachers, transporters, officials, engineers, and community representatives who believe the situation in FATA must change and are ready to contribute towards this end in whatever way they find it useful to do through TQK deliberations. Civil Society Organizations (CSOs), private sector, academia, and media will be important part of the TQK' stakeholders.

The vision of the forum is to enable tribal women to contribute and influence political, developmental, and social decision-making processes of/for FATA.

To create space through an alliance of civil society, academia, and enterprising individuals to empower tribal women.

FATA has a distinct legal and administrative status within the political structure of Pakistan. Recently, this distinctive status has undergone reforms such as the introduction of adult franchise, reforms in Frontier Crimes Regulation (FCR), introduction of the Extension of Political Parties Act, and signing of the Local Government Regulation (2012).

In the backdrop of these reforms, there is need to oversee the implementation of reforms, particularly their impacts on women. Moreover, there is also need to empower women to influence policy-making for future reforms. TQK will provide forum to oversee and lobby for governance-related reforms in FATA.

Peace and tolerance are necessary pre-requisites for multifarious development and emancipation of women.

Armed conflicts mostly reinforce male superiority through state policies and institutions. During the  last two decades, growth of militarism, radicalism, and Talibanisation in FATA has added to intolerance against the marginalized segments of the tribal society, especially women, and  religious and sectarian minorities. It has disrupted traditional tribal structures and women’s status in tribal society.

There had been instances of humiliation at public places, kidnappings, floggings, and killing of women by militants – earlier unimaginable in tribal society. Militancy has also disrupted the pro-women reform processes in FATA. Since women are to pay the most for the growing militancy and Talibanisation, hence, there is a need to understand the impact of militancy on women and women’s perspective of peace.

Tribal women aspire for peace and development in the region, but unfortunately, they have been ignored in peace-building processes.

All peace agreements with militants in FATA were concluded, barring women. There is a need to acknowledge tribal women as agents of peace and include them in conflict resolution and peace-building negotiations.

TQK envisions a larger role for women in preventing and resolving conflicts and sustainable peace and development in FATA. TQK is a forum to discuss and analyze the impact of armed conflict and militancy on women in FATA and adjacent areas, lobby for inclusion of women in peace-building processes, and facilitate capacity development of tribal women in conflict resolutions, mediation, and negotiation skills.

Women in the tribal areas work longer hours than men like other women in the country. Women in general are never recognized for day-performing tasks to maintain the household, such as fetching water and collecting wood –  the only source of fuel in many parts of the tribal areas.

In many parts of the tribal areas, women are also responsible for agricultural production as members of the family and as  laborers. With unpaid domestic work, usually women paid less, which forces them to live in extreme poverty and also affects their health and overall well-being.

The differences in the work patterns of women and men, and the ' recognition of work' that hardly reflect in national economic survey reports, increase gender disparities in every field.

The low percentage of women’s identity cards contributes in lower access to resources and financial schemes. For example, ID cards as a basic document for citizenship verification is a basic requirement of every financial institution, including government schemes. According to Pakistan’s Committee on the Elimination of Discrimination against Women/CEDAW report (3rd and 4th periodic report), 21% of Pakistani women hold national identity cards and one third are without photo identification.

TQK supports initiatives that will bring change in the economic condition of women. Through discussions, TQK will also find ways to improve the living standard of women in FATA.

Only by means of education will one’s potential can be utilized to maximum extent.

Unfortunately, the education statistics in FATA are not very striking. Rather, they have become a major cause of concern over the years. FATA has been badly affected due to the War against Terror.

The education system of the region has totally been ruined. The region already had poor educational opportunities for women, and the situation is getting worse day by day.

There is a need to improve women's access to better education facilities, since only education can improve a lot of women in the region. TQK supports improvements in educational infrastructure in FATA, particularly, provisions for connecting  female education and livelihood.

TQK will facilitate the initiation of a dialogue on improving and establishing better educational opportunities, and increased accessibility of education for all sections of the society in FATA.