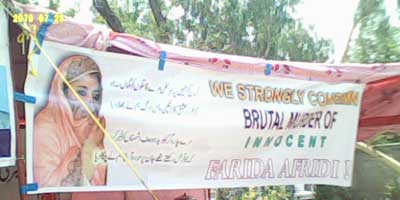 On the 4th of July 2012, Farida Afridi was travelling from her home near Peshawar to the NGO headquarters where she worked, in Khyber Agency, Pakistan.  For those of us in the 'west', women can travel safely to work each day, and fortunately, do not have to consider the risks this can entail.  For Farida, however, she was under no illusion that a simple daily journey to work could cost her life.

Tragically, on that fateful day, this risk became a reality.

Brutally shot by –  as of yet, unknown motorcyclists, Farida died.  Before her murder, Farida was aware of the animosity towards her and her friend, Noorzia.  The friends – who considered one another as sisters, were concerned about the problems facing women in their community, and this drove them to set up an NGO, Society for Appraisal and Women Empowerment in Rural Areas (SAWERA), a few years previously, in hopes to reach out to the women by providing education and training.

Living in a FATA province, people are unprotected by the Pakistani constitution, and the strict traditions of the tribal society greatly limits opportunities for women.

The conservative culture, tradition, and religious beliefs in these areas mean that any woman who attempts to work, or to campaign for women’s empowerment, is viewed with severe suspicion, and both Farida and Noorzia knew there was violent antipathy felt towards women such as themselves.

Inspirational women such as Farida and Noorzia continued to fight for women’s rights despite the dangers, but why do incidents of violent crimes, and in such cases, persist?

Why are there no governmental control or policies in these isolated areas of Pakistan, to provide better protection to women rights workers, and what can be done to address this problem?

The work that women rights workers are doing, in choosing to empower other women in their community, is made ever more important, because of the risks that these two young women, and others, are facing in doing so.  NGOs that are a result of the diligence and vision of committed individuals, must be held up as a beacon across the globe, the proof that there are people who are willing to fight for the improvement on the status of women, in even the most reluctant of societies.

In order to progress, people continue to bear such risks.  Local organisations are able to approach the intricacies of specific situations, with far more delicacy than is possible with large, multi-national groups.  SAWERA is a perfect example of this.

The Afridi “sisters” understood the established views of gender roles within their society, and moulded their organisation to work with local culture  They respected local traditions, being careful not to act in a way that would be seen as bringing dishonour to their family.  The young women arranged group meetings in their homes, and took other measures to ensure that women felt comfortable attending sessions, whilst respecting their religion and family’s beliefs.   Both Noorzia and Farida, having supportive parents, studied at university: Farida had an MBA in Women and Gender Studies, and Noorzia has an MBA in Human Resource Management. But even their parents had doubts about the suitability of starting an NGO.

In the context of this area, it is appropriate only for women to take charge of domestic issues, running a home and supporting the husband and children. It is greatly frowned upon for women to be seen working outside of this sphere.  There are no such restrictions on men in this type of society.

However, Farida and Noorzia were fully aware of this, and set about creating a way of implementing women’s improvement within this social structure.  In other words, the two young women never attempted to radically move away from the established way of life, but merely to ameliorate it.

With such consideration and diplomacy, it is difficult to understand how the murderers of Farida might attempt to justify their actions.

The fact that there are no government restrictions in place to help prevent such acts of brutality seems implausible to those in the West, where such events would be headline news.

In Khyber Agency, where the murder took place, however, this shooting has been largely ignored.  This is because this area is part of a group of land called FATA (Federally Administered Tribal Areas), which are outside the regulations of Pakistani law.  This arrangement dates back to the English occupation, and was created to avoid conflicts between English rule and conservative Pashtun tribes.

No Centralised Legal System in FATA

This tradition has carried into the present day. All legal issues are dealt with by tribal leaders, rather than proper judicial courts with an unbiased jury.  This carries the problem of a lack of a centralised law system in this region, as trials are heard in front of a small number from a tribe, and the outcomes can vary greatly between different tribes.

Furthermore, the combination of a lack of centralised government, and a tendency towards extremist sentiment, also provides an attractive base for groups such as the Taliban.  It has been suggested that a Taliban member is responsible for Farida’s murder, although as of yet this remains unconfirmed.

A Shelter for Extremist Groups

This unacceptable state of affairs in FATA provinces has proved dangerous to individuals, but also has ramifications in a wider context.

If extremist groups such as the Taliban are nurtured in areas shielded from recognised political structures, then the implications could be far further-reaching.  If there is a wider acceptance of ideals where women are viewed as inferior, other women’s rights defenders could face similar consequences to Farida. Farida’s murder is sadly indicative of a wider issue facing humanitarian workers across FATA regions.

Tragically, perhaps something as terrible as the specific targeting of NGO workers is what it will take for the international community to prioritise problems in this area.

In extreme cases, the condemnation of groups such as SAWERA, may even be encouraged amongst more conservative communities.  People such as Farida and Noorzia, have to battle daily against the prevailing preconceptions of those around them, and when merely surviving is a success. It is only through the determination of such brave young women that others in the community have a hope of being able to change their society for the better.

It is vital that there is continued support for organisations such as SAWERA, to ensure that the issues that are of importance to those living in a certain area, are addressed.

Farida and Noorzia have always been careful to avoid topics that would face harsh controversy in the region, such as AIDS, and in this manner such organisations can instigate a process of steady, but cautious, progress.  It is such qualities that attracted Safe World for Women to support SAWERA.  Being one of their many valued Field Partners, the team at Safe World were able to develop a close, albeit physically long-distance, relationship.  The news of Farida’s murder came as a devastating blow, although was tragically perhaps not a total shock.

It is undeniable that changes have to occur in FATA.

It is totally unjust that people such as Farida are totally exposed to violence and pay the ultimate price for campaigning for women’s rights.

There is a strong need for the international community to put more pressure on the Pakistani authorities to find out who is responsible for Farida’s murder, along with the other acts of violence aimed at humanitarian workers in this area in recent months.

Following this, new political infrastructure is needed to prevent further criminal activities.  At the same time, senstivity and respect towards the entrenched traditions of these areas is important.  There is no doubt that this transition will take time and careful consideration; however, Farida’s sudden death must signal that now is the time for actions to be taken.

If Farida’s sacrifice is used in a positive way, to begin a process of change in Pakistan’s FATA provinces, then her death will not be in vain.  Her strength and determination has demonstrated the positive change, and development that can be available to women even in the most difficult of places.

Foremost thoughts and condolences are of course with Farida’s family and friends, who must be grieving the tragic loss of this inspirational young woman.  However, they can seek some comfort in the knowledge that Farida died supporting the rights of women in her community –  a message that will now be heard around the world, and can take an enormous amount of pride in her achievements.