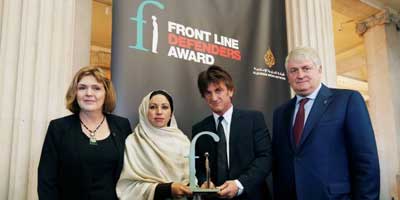 A Pakistani human rights activist received a standing ovation as she received a prestigious award from Academy Award winner Sean Penn to honour her sister, who was murdered by militants.

Farida Afridi – who had set up an organisation to assist the education and empowerment of women in rural Pakistan – was shot dead by militants on her way to work in July 2012.

Her sister Noorzia Afridi asked guests at the Front Line Defenders Awards at Dublin's City Hall to stand for a moment's silence in her memory.

Sean Penn was introduced to Education Minister Ruairi Quinn and the two struck up a conversation at the breakfast table.

Presenting the Front Line Defenders award to Ms Afridi, Penn said he was "honoured" to do so.

Having read the stories of the six finalists for the award, he said: "I begin to understand the meaning of true courage."

He said it had been difficult to choose between the six finalists nominated – among whom were two other women, Berta Caceres from Honduras who fights for the rights of indigenous peoples, and Lydia Mukami from Kenya who defends the rights of rice farmers and who has had her house burned down as a result.

The Front Line Defenders Award is presented every year to one human rights defender who has made an exceptional contribution to the cause of human rights.

This year, the organisation received 110 nominations from 51 countries. Mr O'Brien warned that while we celebrate the achievements of human rights defenders, we need to move "beyond the warm glow of satisfaction and remember that all of these people have paid a very high price for their principles".

"Risk – that's an important word to remember, because every one of the 110 human rights defenders . . . are directly at risk because of their peaceful work defending the rights of others," he said.

Noorzia works for the Society of Appraisal & Women Empowerment in Rural Areas (SAWERA), which is the first women-led, grassroots NGO in a hostile tribal region and which educates and teaches business skills and community management.

'When I think of the day Farida was assassinated, it breaks my heart' - by Hena Gul

In Honour of Farida Afridi, RIP - by Lal Jan Afridi

Farida Afridi: Paying the Ultimate Price for the Women of Pakistan - by Courtenay Forbes