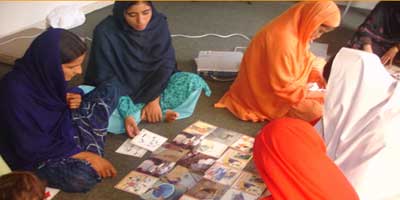 SAWERA is a local women-led NGO in Pakistan, working in Khyber Agency (a tribal area) in particular, and in Federally Administrative Tribal Areas (FATA):  in general, a tribal society mostly, and commonly, a religious society.

The inspiration behind the establishment of SAWERA (Society for Appraisal & Women Empowerment in Rural Areas) arose when like-minded educated women of Khyber Agency-FATA gathered and thought about developmental interventions, and felt that marginalized portions of society were repeatedly ignored by authorities.

SAWERA is a voluntary, not-for-profit organization dedicated to social and economic development, with due regard for ecological conservation, gender mainstreaming, and social protection – partcularly focusing on the backward areas and marginalized sectors of the communities, especially women and children.

“Parda” is an Islamic term which translates as “veil”. In English, it means a cloth which is used by women to cover themselves so that their body parts are not visible to males.

Men generally do not allow women to get an education, and they don't willingly involve women in decision making.

Lack of peace and self security in tribal areas is another issue which badly disturbs social and developmental processes.

But we face these challenges thoroughly with following methodologies: