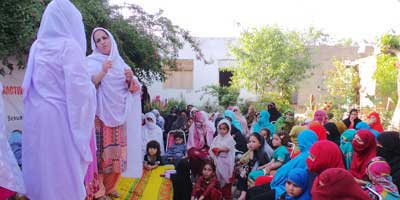 The region is affected by terrorism, war against terrorism, sectarian violence, and influx of IDPs [Internally Displaced Persons], and some of the worst natural disasters like the 2005 earthquake, and 2010 floods in Pakistan.

Blue Veins is a rationalist*, women's organization born out of a need for information, activism and grassroots organizing towards the empowerment of women. Today, Blue Veins works to empower women and improve their status, which is essential to realizing the full potential of social, political, and economic development.

Blue Veins believes every woman and girl should have the opportunity to shape her future by naming her hopes, aspirations and dreams. But, too often, their voices are muted, suppressed, or ignored. Blue Veins works to overcome the barriers that silence women and girls.

Blue Veins works to establish a society where women are provided with the opportunity to attain physical, mental, social, financial, and spiritual independence by advancing the process of self empowerment. The work of Blue Veins reflects on the importance of collective leadership, shared commitment, and mutual trust in building sustainable global movements. The bold leaders in Blue Veins are not afraid of standing up and demanding things change. Our strategies are innovative, radical, and catalyze the process of change. We believe that change must come from within and we work to achieve our mission through empowering people with the information and behavioral impetus for change.

Blue Veins was founded in 1999 and revived its charitable registered status in December 2002.

As a crucial member of our society, a woman has to play several roles. She is a mother, daughter, sister and wife. But before all of that, she is an individual. So, in order to stay strong for herself, she has to become more aware of the risks and problems that surround her. She has to understand her rights better, so that she is able to respond in a better manner.

With this belief, Blue Veins was founded by a group of seven enthusiastic women in March, 1999. They were of the view that as women, who affirm the humanity and dignity of all people, we have the responsibility as well as the ability to create a world from which injustice, inequity, inequality, and oppression are gradually eliminated. They were committed to find other like-minded persons who work with us to construct the foundations of a world based on justice and compassion, in which all people can live in peace without fear, or insecurity.

These women wanted to do a lot for the suppressed women of Khyber Pakhtunkhwa (KP). They were discouraged by the lack of information and recourses available to women because of conservative culture and traditions. They took the challenge and raised their voices. They faced many more problems and intimidations than they anticipated, but never lost their hearts and they continued their struggle.

The founders of the Blue Veins believed that every woman, regardless of her status of life, has an inherent right to dignity. To enjoy this dignity, her human rights must be affirmed.

In response with determination, hope and vision, Blue Veins was born. Blue Veins was established on 23 March, 1999. Today Blue Veins is a growing group of volunteers embracing the motto “Awareness, Action, and Advocacy”.

There are numerous socioeconomic, religious and political problems which affect our work. High rate of illiteracy, poor access to education, health care and political participation, high unemployment and widespread poverty, economic instability, lack of opportunities and lesser political space for women are some the conditions which influence and affect our work.

The ongoing war against terrorism, sectarian armed conflict, and its implications on the population of Khyber Pakthunkhwa & FATA (Federally Administered Tribal Areas), trends towards militancy and extremism, the misinterpretation of religion, and the use of religion to subjugate women is also a big challenge to our work.

The destructive exploitation of natural resources, lack of infrastructure/lack of women friendly infrastructure, low tax revenues, widening gaps in the energy supply, and a lack of transport and storage capacity resulting in substantial agricultural losses, are some of the other problems facing KP and also affect our programs and initiatives.

Bad governance, corruption, nepotism, impunity, bad law and order situations, and the non-reliable, delivery of public services also continue to be major challenges. Poor governance performance by the central and local authorities, ongoing problems with public safety and security as a result of religiously motivated or other forms of extremism, and frequent natural disasters make it more difficult to make sustainable development progress.

Pashtun women have always been under the axe of men owing to complex religious, social and cultural restrictions which have reduced her role in the society to a subhuman creature. The current extremism and militancy in the region has further pushed her into the pitch-darkness. She is denied any decisive role in the affairs of home and raising of children. The right to get education is enjoyed only by few, while right of share in inheritance is still a far–fetched cry for women in a typical Pashtun society.

There are other challenges too. Almost every year - more frequent in monsoon, the province also suffers from flash floods, although there are no systematic records. Flash floods have tended to occur more in recent years owing to changing weather patterns and are characterized by the near absence of early warning cover to warn vulnerable communities. While such floods have been on the rise over the last couple of years because of changing weather patterns, the humanitarian consequences are accentuated owing to absence of any viable local early warning system and the sudden onset nature of the hazard.

Some of the key issues especially prevalent in our region that impact adversely on the lives of women and children are:

The beneficiaries of Blue Veins include:

* By 'rationalist', we mean: not radical, but flexible, open-minded and ready to listen to others' views.