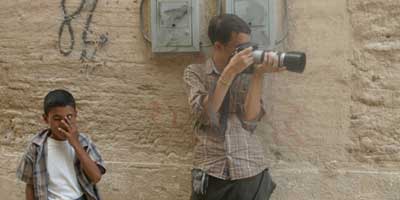 Shane Bauer and Josh Fattal were finally released from prison on 21st September, 2011.

Shane Bauer tells Iran court: "I was investigating US Corruption"

"I was in Iraqi Kurdistan as a tourist.

"I have been to Baghdad once in the past, as a journalist, when I was investigating US support for the Iraqi Death Squad and corruption between the US army and a group of Sunni Sheiks that eventually became a Militia called the Awakening Council."

Shane and Josh's trial is ongoing.

Sarah Shourd, Shane Bauer, and Josh Fattal, - three American hikers - were arrested on 30 January 2009 on the border of Iran and Kurdistan Iraq, and they were charged with espionage and illegal entry.

On 14 September 2010, one of the three prisoners, Sarah Shourd, was released on bail of $500,000 after spending nearly 14 months in solitary confinement, following reports of ill-health.

Sarah Shourd and Shane Bauer became engaged to be married while in Evin Prison.

Sarah's fiance, Shane, and their friend Josh, remain inside Tehran’s Evin Prison and, despite their lawyer’s efforts, they have not been granted bail orders for temporary release.

Lawyer denied access to Shane and Josh prior to trial

Asked whether he was able to see his clients and read their case files, lawyer Massoud Shafiee said:

“I was able to review the case. But despite my repeated requests to see my clients, I was not allowed to do so...

"They were supposed to be available to me one-to-two hours before the session today, and I arrived the courts early, but they were brought to court from prison fifteen minutes after the scheduled court time, and we had to go directly into court....

“Today I objected again to these circumstances, where I was not able to see my clients before court in order to talk to them. Judge Salavati promised to give me an extensive visit in prison. We will have to wait and see what happens....

“Fortunately, they were brought to court without handcuffs and prison uniforms. They were both wearing normal clothes. I sat next to them. They were well.”

Regarding whether the two Americans were allowed to defend themselves in court, Massoud Shafiee said:

“I am pleased with this. One of the reasons the court proceedings had to be extended into another session was this. All their statements were translated into Persian by a Persian translator, and then the judge’s words were translated for them into English. My clients were able to make their statements. The two of them and I did not accept the indictment and we refuted all the charges.”

Massoud Shafiee said that his request for releasing Josh Fattal and Shane Bauer on bail until court ruling was not accepted.

“My whole request was that they be released on bail until the verdicts are issued, and that they stay at the Swiss Ambassador’s home at the Swiss Embassy during this time; [my request] was not accepted. Now we only want for the next session to be scheduled soon, and that I am allowed to see my clients in prison,” he said.

The lawyer told the International Campaign for Human Rights in Iran that in today’s court session, Sarah Shourd, the other suspect in the case who was released on bail several months ago due to her illness and returned to US, was also tried.

“I had asked Sarah to write her defense bill, which she dispatched to me through the Swiss Embassy, and I submitted it to the court today. And now my least request is that the other two be released as soon as possible, too,” Shafiee said.

'The Sheikh Down' by Shane Bauer - published in Mother Jones

Shane Bauer was released from Evin Prison on 21st September 2011.