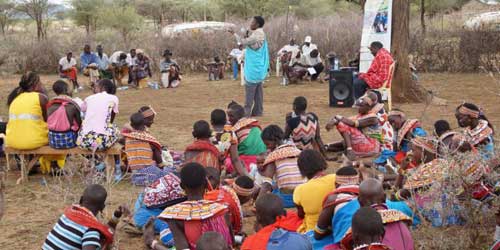 Elizabeth Lemoyog, a PCF facilitator, told me that the women in Namayiana Village wanted to tell me something. Elizabeth was smiling and had a sparkle in her eyes... "We have decided to abandon FGM in Namayiana Village.”  This was the BEST news we could ever have received!!

On the 5th December, I visited my friends at Namayiana Village (Archer’s Post), the village I first visited in August 2012, while on safari in Samburu.

During this 4th trip to Kenya, Elizabeth Lemoyog, a PCF facilitator, told me that the women in Namayiana Village wanted to tell me something. Elizabeth was smiling and had a sparkle in her eyes, but I didn’t have any idea what the “message” was going to be.

“Do they want to tell me something or do they want something…a bore hole, seed money for their beaded jewelry business?” I wondered.

The message, translated from Samburu language to English was,

“All of us here in Namayiana Village are praying for you and PCF. We want to thank you for educating our girls in your workshops. The girls are returning to villages and sharing what they learn with all of us. We don’t hear about FGM cases in other nearby villages anymore. We have decided to abandon FGM in Namayiana Village.”

This was the BEST news we could ever have received!!

During the period from August to December, 2015 Pastoralist Child Foundation has made good progress towards its goal to reduce incidences of female genital mutilation (FGM) and child marriage. Girls and women suffered mutilation on the basis of the rite of passage to womanhood, which without it are considered unclean and unsuitable for marriage.

The project focused on more responsive community members and duty bearers with increased capacity to prevent and respond to FGM and child marriage. As a result, the project has reached 382 members of the community which includes girls and boys, men and women, youths, service providers, health practitioners, police officers, teachers, and village chiefs.

The project has empowered the Area Advisory Council members to do advocacy in the community on child rights and protection, importance of the Alternative Rite of Passage and its sustainability, importance of education for the children. As a result, they were able to influence parents through community meetings to allow their children to participate in trainings.

Through capacity building of government staff which included police, health practitioners, area chiefs, teachers and other relevant partners (involved community change agents, PCF volunteers), there is an increased change of attitude towards advocating to respond to the prevention and protection of children from FGM and child marriage. This is evidenced with the increased awareness in the community at health centers where trained health practitioners are providing awareness to the patients.

Community engagement in the discussions and dialogues on the effects of FGM and child marriage took place among six selected villages (Lare-soro, Sere-olipi, Lerata A, Lerata B, Kiltamany and Lpus leluai). The communities are willing to accept change and women announced in the presence of the elders that their daughters will not be mutilated.

Some male elders did agree but they requested that an alternative to FGM as a rite of passage to womanhood and marriage be introduced. The Alternative Rite of Passage (ARP) should be in line with the community norms and customs.

Support from the 'Elders'

PCF has learned that there’s a great thirst for knowledge in the pastoralist community. When an organization working on the ground dedicates its work for the empowerment of its own community the people are supportive.

We now have elders cheering us on and saying, “No FGM!” because girls and community members who have attended our workshops share what they’ve learned with them. Most elders and men are completely unaware of the severe harmful effects FGM has on their daughters and wives. When females complained of physical pain they often disregarded the cries. Now they know the reasons for physical, emotional and psychological scars, wounds, and pain.

We view it as the era in which the light has begun to shine. Our efforts to ensure the continuity of light is our focus.

PCF provided funds to support the provision of sanitary towels for girls in schools. During this activity there were motivational speeches which included talks on harmful cultural practices, namely FGM and child marriage.

Progress Towards Outcomes and Outputs

Goal: More responsive community members and duty bearers with increased capacity to prevent and respond to FGM and child marriage.

Outcome progress: Community members, government staff and other stakeholders are handling child protection issues and also responding to FGM and other related concerns. Youths and morans – "warriors" (men who have been circumcised and of marriageable age) are willing to accept change and some have already married uncircumcised ladies.  Trained girls said “NO to FGM and child marriage.”

This has been attributed to the meetings and training conducted by our project in partnership with other stakeholders:

PCF is looking forward to a successful 2016 and we want to thank all of our friends, supporters and funders for believing in our mission to eradicate FGM and child marriage.

We also look forward to increased collaborations with other like-minded organisations in order to accelerate the abandonment of FGM and child marriage in Kenya.