An exciting and productive trip to Samburu

I’m pleased to write this report following a very exciting and productive trip to Samburu, Kenya. The time spent with our organization’s amazing and dedicated Co-Founder and Director of Samburu District, Samuel Siriria Leadismo, as well as our stakeholders, supporters, sponsored girls, residents at Namayiana Village and mentors was most memorable and full of wonderful surprises!

Work got off to a great start the morning after my arrival in Nairobi:

We were extremely excited and honored that Dr. Kilimo took the time to meet with us. PCF’s goal was to inform Dr. Kilimo of our current programs and future plans. We also wanted her advice on how to best tackle the issue of FGM in Samburu and Maasai Mara.

Dr. Kilimo gave an extensive history of FGM in our communities and advised us to continue providing educational workshops for everyone, including men and elders who are the main decision-makers. Mobilization and sensitization at all levels are key factors in effecting change in order to create better life outcomes for girls.

Girls must be empowered with the knowledge and confidence that they can achieve anything. Dr. Kilimo is a prime example of this and stated that she wants to be kept informed of our work and progress, and that we can count on her support of our efforts to eradicate FGM and forced early marriages of girls. We were so grateful for the opportunity to meet with Dr. Kilimo! She assured us that we’re on the right track and we appreciate her advice and support. 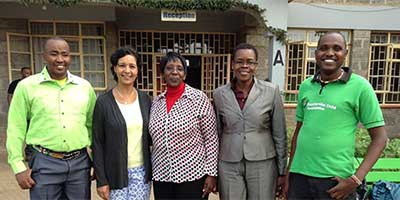 This was like a homecoming for me as I recognized many of the beautiful people I met 2 years ago. I first visited Namayiana Village in August, 2012 and was the only visitor that morning.

I was blown away by the beauty of the Samburu tribe and it was that very day when Pastoralist Child Foundation was co-founded by myself and Samuel Siriria Leadismo, a resident of this village and assistant restaurant captain at Samburu Lodge where I stayed. With the expertise of our friends and volunteers Peter Njoroge and his wife Susan Muigai, our official video is finally completed! Peter filmed the women and girls singing welcome songs, dressing me in a traditional Samburu dress and jewelry, daily activities in the village, men dancing and playing mancala, etc.

Included in the video are 3 of our sponsored girls, Asha, Janet and Serena talking about how PCF has helped them. They were interviewed and filmed at St. Mary’s Girl’s Secondary School, a top-rated boarding school in the town of Isiolo.

Samuel and I visited Asha, Janet and Serena - 3 girls sponsored by Pastoralist Child Foundation. Although Samuel regularly visits the girls to make sure they’re keeping up with their studies and participating in school activities, this was my first visit. Needless to say, it was a very emotional time. The girls and I hugged and cried. (Tears are flowing as I write this.) We didn’t talk for several minutes. In each girl’s eyes I saw deep and sincere appreciation.

Knowing the story of each girl’s family background made this reunion even more meaningful, and at one point heartbreaking when Serena cried inconsolably because she so misses her 3 year old son. All 3 girls are in Form 1 – the equivalent of grade 9 and they’re excelling. Asha is class Prefect and wants to be a lawyer, Janet wants to be a doctor and Serena wants to be a nurse. When I asked the girls where they’d like to continue their post-secondary studies, Asha and Janet said, “Abroad.”

Samuel and I also met with the interim principal and 3 of the girls’ teachers who described the school’s rigorous schedule which begins daily at 5:00AM. They had very positive comments about the girls’ academic achievements and good behavior. I had the pleasure of getting to know the girls when we sat in the shade and talked for an hour.

They were very attentive and hung onto every word of advice I offered them. I also watched, photographed and videotaped Serena in her bright green gym uniform playing a lively game of volleyball with her classmates. Serena is the school’s volleyball champion! She was leaving the next day to compete in a 5-day regional volleyball tournament. The girls giggled and squealed with delight when I showed them the pictures I took of them. Oh what fun!! 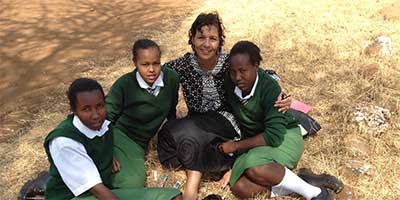 Saying “So long” was hard but I promised the girls that PCF will continue to sponsor their education and that I’d be back next year (or earlier, if possible) to visit them again, wishing them continued success and happiness in their lives.

Meeting with Mentors in Isiolo

Following our visit with the girls, Samuel and I met with 6 of our volunteer mentors in Archer’s Post. We thanked them for their time and assistance with PCF’s work. The mentors provide valuable help in many areas – mentoring our sponsored girls; planning, organizing and facilitating our educational workshops; fundraising; raising awareness about PCF’s mission and programs; connecting us with other like-minded individuals and NGO’s in Kenya; making excellent presentations on behalf of PCF at local workshops and official events. Our mentors are educated professionals who we highly respect and thank for their dedication and tireless efforts. 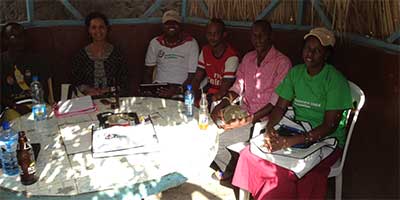 Samuel and I met with Margaret Ikiara, Founder & Director of CIFORD Kenya, an NGO founded in 2002 with the commitment to improving the standard of living and self-esteem of the marginalized community in the Meru region of Samburu County. Margaret was accompanied by her friend Lucy who operates a primary school in Meru.

CIFORD focuses on food insecurity, girl empowerment, FGM, HIV/AIDS support services, sustainable agriculture, gardening, capacity building and other worthwhile causes. The purpose of our meeting was to plan collaborative educational workshops and camps in 2015 in an effort to initiate dialogues between Samburu and Meru communities that have similar issues.

We’ll invite 180 girls from Samburu and 180 girls from Meru to attend camps together to learn about FGM, forced marriage, HIV/AIDS, the female sexual reproductive system, health and sanitation, resisting violence, and the importance of a formal education. We’ll also hold separate workshops for women, morans (men) and elders.

The workshops will culminate in 3 Alternative Rites of Passage ceremonies, saving 360 girls from undergoing FGM. PCF and CIFORD are currently co-drafting the preliminary plan and will submit the proposal and budget to funders in the coming weeks. Total budget: US $19,000. 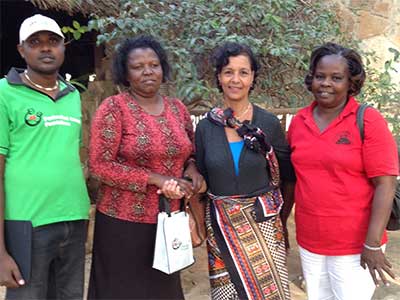 The beautiful kanga I’m wearing is a gift from Margaret.

On a very dry hot day (no rain until October!) in Namayiana Village, great fun and laughter was had by all! Samuel and PCF’s Community Mobilizer, Elizabeth Lemoyog who is 8 months pregnant, did a brilliant job of organizing and refereeing the many races and soccer games between toddlers, children and teens.

Women and men stood on the sidelines cheering loudly for their favorite athletes. Ribbons and medals donated to PCF were handed out to every child. The children proudly wore them. After much-needed refreshments, toothbrushes donated from my kind dentist were given to the children and women. 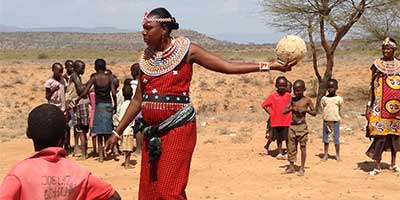 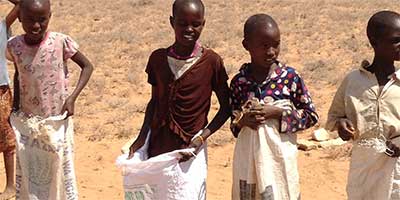 Girls preparing for the sack race 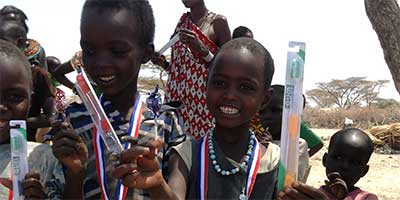 Happy children at the end of a fun day!

After all the fun and games, it was time for a serious conversation with 25 women in Namayiana Village.

With the help of Samuel translating into the Samburu language, I expressed PCF’s sincere commitment to continue working towards the eradication of FGM and forced early marriages, as well as the sponsorship of girl’s education. When I asked, “How many of you want to eradicate FGM?” – every single woman raised her hand! This is so promising. We expect to have our first Alternative Rite of Passage within a year….the sooner the better! In summary, Jenestina Malian, the Chairwoman of the village’s recently registered self-help group stated that the community is so very thankful for PCF’s help. We talked about the possibility of installing a well to provide safe drinking water for the villagers in order to prevent cholera and other harmful bacteria. (The water is literally brown.) Crocodiles lurk in the river where villagers gather water and bathe, resulting in the killing and/or maming of people. Future plans also include building a tourist campsite, a restaurant run and operated by the villagers, construction of a fence around the village and building a pre-school for girls and boys.

Driving along the route back to the lodge, I met our very first sponsored student’s grandmother. Our student, Brenda Barasa, in Form 2 at Magumoni Girl’s Secondary School is an orphan whose parents succumbed to AIDS and is therefore being raised by her lovely grandmother. I was so happy to meet her! The Samburu people are extremely hospitable and appreciative. Grandmother is no exception. She thanked us for taking care of Brenda’s education. Here we are together:

We also visited Asha’s family in Archer’s Post. Her mom is a struggling single mom with 6 children. She, too, expressed her deep appreciation for PCF’s sponsorship of her daughter. 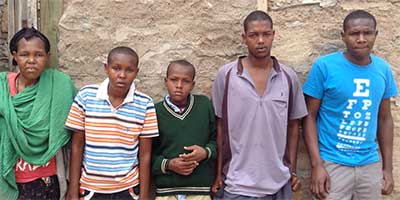 Asha’s mom and 4 of her siblings – a nice family indeed.

Met with Samuel Siriria Leadismo, Co-Founder & Director of Pastoralist Child Foundation and Warrior for Girls’ Rights. Samuel and I finalized the planning of PCF’s August 17-21, 2014 Educational Workshop Camp for 60 girls in Archer’s Post, Samburu County. Additional subjects discussed were a future jewelry-making business for local women in order to provide sustainable income; identifying other viable sources of income in order to reduce PCF’s time-consuming efforts of fundraising; adding affiliate offices in the USA, Europe and Australia to support our efforts in raising awareness and money for programs and operating expenses. We’ll add a “wish list” to our website. We both committed to continue working even harder than ever to accelerate the eradication of FGM and forced early marriages. We also agreed that this visit was very productive and are very excited about the future of PCF. We envision great things and are confident that with hard work, dedication and honesty the results will be fantastic!

Met with Senator Naisula Lesuuda, representing Samburu County in The National Alliance, Nairobi, Kenya. My last meeting in Kenya was with Senator Naisula Lesuuda. She graciously offered to drive me to Nairobi’s Kenyatta International Airport for my 11:30PM departure flight. We make it PCF’s business to connect with influential people at every level – from grassroots to government officials – to inform and update them about the good work we’re doing. Senator Lesuuda was kind enough give of her time to learn more. (Her driver and security detail were listening attentively and asked for business cards and postcards.) Senator Naisula grew up in Samburu and is fully aware of the challenges girls currently face every day.

She’s a very caring humanitarian with Samburu’s best interests at heart. She said PCF is on the right track and asked to be kept informed of our activities. We can count on her support. I didn’t take a picture because it was quite dark when we stood outside the airport to say farewell. My iPad’s camera doesn’t have a flash. What an honor to have met the lovely intelligent Senator!

As I end this report, I’d like to share a picture from that amaaaaazing day – up close and personal with a most beautiful and magnificent creature. 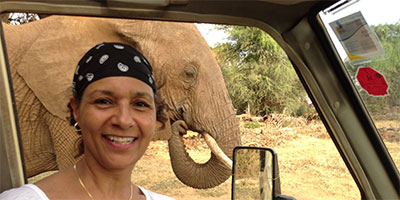